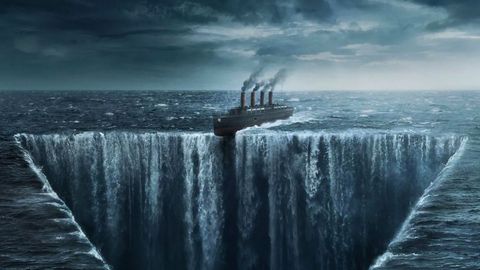 We have been biting our nails for more than a year before the announcement of a new addition to the catalog of netflix series by Baran Bo Odar and Jantje Friese, the creators of the intriguing ‘Dark’and finally we have all the details of ‘1899‘ (what they have let us know), just a month before its premiere.

The three seasons of ‘Dark‘, a convoluted and wonderful story full of temporary paradoxes, family intrigues, sects, hidden experiments and even clashes between different dimensionsThey were a worldwide phenomenon. To the surprise of its creators, the German series successfully reached homes around the planet, crossing borders with unexpected ease. This has given its writers a boost of confidence… But it has also extra pressure.

“There was a lot of pressure because we never expected that kind of success in the first place, and then it grew season after season,” Friese says in an interview with ew. “And then after the third season of ‘Dark’there was a lot of pressure on our shoulders, because everyone has expectations, and everyone wants to live again more or less the same trip“Friese says this bothered him during the first few months of actively working on the ‘1899’ scripts, but, “At some point, we just said, ‘Let’s shake this off.’ And basically concentrate on what we want to do and what we want to tell.”

There is an official synopsis, but both the creators and the platform itself They have tried to reveal as little as possible. so that the mysteries of the series are a surprise that the viewer has to discover.

“A steamship carries emigrants to America. The passengers, from various countries in Europe, have in common hopes and dreams for the new century and their future abroad. But when they discover another emigrant ship adrift in high seas, his journey takes an unexpected turn. What they find on board will transform their journey to the promised land into a terrifying nightmare..”

Although the first news defined ‘1899’ as a horror series, its creators deny it. “I’d say it’s a mystery drama show, or maybe a mystery thriller. I mean, we’re always mixing genres, but DNA is not per se that of a horror program”.

Netflix has recently revealed that the premiere date of the first season of ‘1899’ will be the November 17, 2022. And yes, we talk about “first season”, because Friese has assured that everything is raised as a 3 season arclike ‘Dark’.

For now, this first round will include 8 episodes.

‘1899’ will be a multilingual series. That is to say, it will not be in German, English, or Spanish, but in all of them at the same time. Being set on an emigrant ship, each character will speak in their native language, from Danish to Cantonese.

As we can see in the trailer, the mysterious elements will be the order of the day. “There are a lot of things in DNA that are close to ‘Dark’ in terms of puzzles and that need an active and engaged audience.says Friese. “But there are also things that are quite different in terms of atmosphere and tonality, but also pacing and action. So it’s really a beast unto itself, but it shares a lot of the same mechanics as ‘Dark’.” And Odar has a little advice for viewers: “We love playing with genres and expectations. I think you have to look carefully, because every little piece means something“.

Frank Boy
In addition to movies, comedy, and horror, Fran is also passionate about basketball, sleeping, and searching the internet for crazy theories for her show Los Conspiranoicos.

Everything we know about ‘1899’, the new series on Netflix from the creators of ‘Dark’

55-inch, 4K, Google Assistant ... LG's smart TVs fall in price
She said she did not believe in the coronavirus and is now hospitalized fighting the disease
When does season 6 of Elite premiere on Netflix?