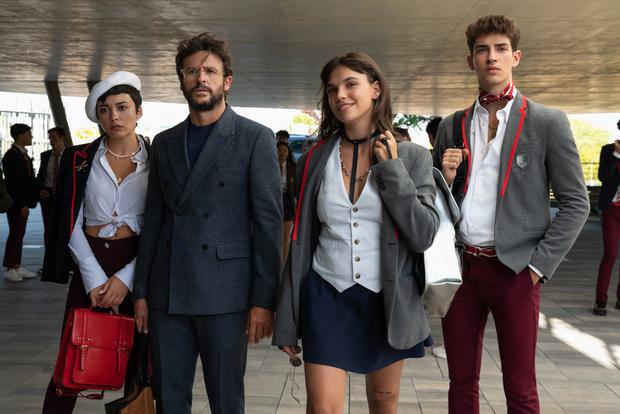 Season 4 of “Elite” It is now available on Netflix and the eight new chapters of the Spanish series showed us four new students, a very strict director who arrives in Las Encinas, more love affairs and a tragedy that promises to keep viewers hooked.

MORE INFORMATION: Who’s who in Elite 4

Benjamín (Diego Martín), the new director to “Las Encinas”, is one of the most powerful businessmen in Europe willing to redirect the school by applying a strong hand. His three children arrive with him: Ari, Mencía and Patrick. Three teenagers who are used to always getting their way, and who, along with a fourth new student – a crown prince named Phillipe – will cause a ruckus inside the school.

In the new installment We see that Ari begins a relationship with Guzmán, but he also shows his interest in Samuel; Mencía convinces Rebeka to open her heart, but problems with her parents affect their romance; Patrick first joins Omar and Ander, but then gets in the way; and Prince Phillipe approaches Cayetana, but makes some unforgivable mistakes.

MORE INFORMATION: When will season 5 “Elite” be released on Netflix

Patrick (Manu Ríos), Ari (Carla Díaz) and Mencía (Martina Caraddi) are the new colleagues who have to adapt to “Las Encinas”. In addition to being the children of the new school principal, Benjamín Blanco (Diego Martín), they will be partly responsible for causing the main problem in season 4 of “Elite.”

Another new face is Phillipe (Pol Granch), direct heir to the throne of a principality in central Europe and an exemplary student until he plunges into Las Encinas, where the world he knew remains on the sidelines.

In the fourth season of “Elite” we see that new relationships emerge between the students. One of them is the one starring Mencía Blanco, a character played by the actress Martina Cariddi, with Armando.

Mentioned White Commerford, Ari’s sister, is chaotic, rebellious and plays by her own rules. This leads her to defy her father and get into a lot of trouble. She begins a sincere relationship with Rebeka (Claudia Salas), and at the same time begins to have an affair with Armando, played Andrés Velencoso, who pays her for having sex.

In the beginning, Mencía is attracted to the businessman and enjoys receiving money in exchange for sexual favors. However, he ends up getting into the wolf’s mouth that will cause serious consequences.

In an interview with “SensaCine”, Martina Cariddi He spoke about the challenge of playing his character Mencía Blanco and starring in one of the most delicate plots of the fourth season of “Elite”.

“When I entered the series I knew nothing, almost nothing about my character. The only thing I knew is that I was going to have a plot with Claudia [Salas], which was something that seemed wonderful and that’s it. I knew a little where to direct the character, but I didn’t know that it was going to have such a delicate plot ”, explains Cariddi about the role that Mencía Blanco plays in this season.

“So it was like: ‘Ufff, let’s see where I’m getting into and see how we tell this in the best possible way,” the actress details about the development of her character.

Finally, Martina Cariddi affirmed that she has done everything possible to address her character and her story within the series. He also said that this will be key when the public receives the plot.