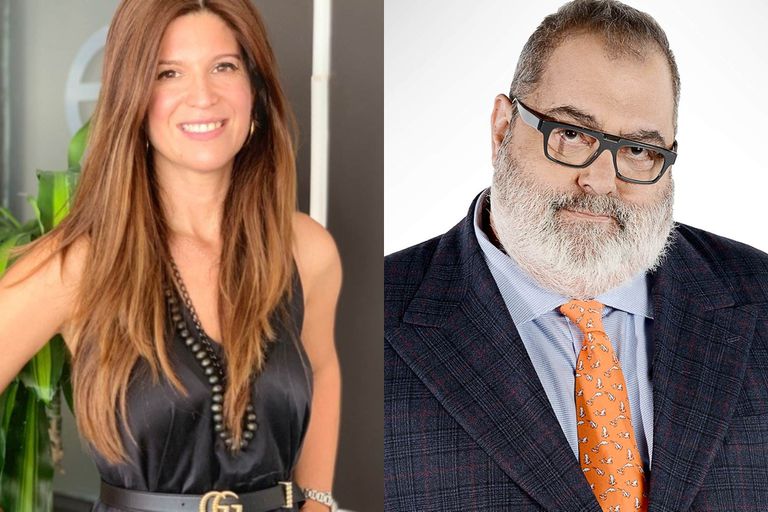 The news flooded all the portals this Tuesday: Jorge Lanata announced her marriage to Elba Marcovecchio on the cover of a famous magazine. This Wednesday, the future bride spoke of the request for a hand and, after ensuring that it was the journalist who made the proposal, she confessed to being very happy.

They started dating almost two years ago and they are more in love than ever. So much so that the 61-year-old journalist did not want to let this year go by to make the great proposal: “Do you want to marry me?”, He would have told his partner weeks ago. Almost without being able to believe it, but with a resounding certainty, the lawyer accepted and an “intimate” wedding is already underway: the union will be celebrated on April 23, with a ceremony for the church and with a party for 50 people. “His ex’s are going to go”, revealed Nancy Duré from the panel of Us in the morning in reference to the women who went through the life of the driver.

Although they claim to get along very well, so far the couple is not living together. “She lives in Retiro, on the floor above him,” Carlos Monti clarified, while one of the panelists warned that coexistence was not a problem for them. Apparently, it is no longer an issue that disturbs them because the couple decided to take the big step.

From Punta del Este, the lawyer spoke with the morning cycle of eltrece and told how she is living this great love moment. “Thank you,” he responded to the congratulations of the team who were delighted with the news. “I’m working, but from here everything is more relaxed,” Marcovecchio said in reference to how they are going through the last days of the year.

Regarding the marriage proposal, the lawyer said: “I am happy!” “Did he propose it to you or did you advance?” Monti asked him on WhatsApp. “Nooo, he alone!”, He clarified. As for whether they have plans to enlarge the family (both already have children from previous marriages), the future bride launched: “Son in common no. Puppy or cat can be “The journalist read, implying that for now they do not think of adding more members to the assembled family.

In November of this year, in dialogue with the program Intruders, the couple spoke about the possibility of an imminent marriage. After telling that they were going to Uruguay to rest, the chronicler of the series of shows wanted to know about the state of the couple. “How is the relationship?” I ask. “Fantastic, what am I going to tell you?”, Replied the lawyer. “Would you like to marry him?” Inquired the journalist. “Are you asking me?” She replied as Lanata gave a shy laugh. The lawyer, then, did not hesitate: “I will answer you: yes, I would like to.” “And you, Jorge?” Insisted the chronicler.

“I don’t know, he just asked me to marry him! I have to answer him ”. “And answer him now!” Said the journalist. “And, I don’t know if this is the moment. At some point I will answer him and we will tell you ”, Lanata concluded in the note. Finally, just over a month after that interview, the proposal is already a fact.

Lanata and Marcovecchio met for a labor issue, during a mediation that the journalist had with Florencia de la V, whom the lawyer was legally sponsoring. I know They saw a second time at a request from him. “It was for a professional issue in which I am working on image rights issues,” she said. -who was part of Fernando Burlando’s studio, now opened one of his own- in November 2020, when he reviewed in The angels of the morning the beginning of the bond with the journalist and driver. That meeting was enough for the crush to emerge. “It was all natural. I felt comfortable from the first moment”, He remarked. And he said: “It was very strange, because from the first day I canceled everything. Did you see that there are people who send you a chat? At the first dinner with Jorge I canceled everything. I said to one person: ‘I think I’m dating.’ Imagine how I felt, “he later confessed in dialogue with Intruders

The lawyer, who has come out to talk about the relationship more than her partner, also elaborated in an interview with BLUE about who took the first step, and hinted that it was the journalist. “I am very feminine, he is a very gentleman”, he limited himself to saying, and then confess that he fell in love “from the first day.” Likewise, Marcovecchio also praised the driver of Journalism for all. “Jorge is the most wonderful man there is, learn! It’s a love ”, he stressed. And he added that the journalist does not skimp on “hugs, restraint and time.”

“I liked everything about him. You like a person with everything they bring or you don’t like. I am absolutely happy ”, added Marcovecchio.