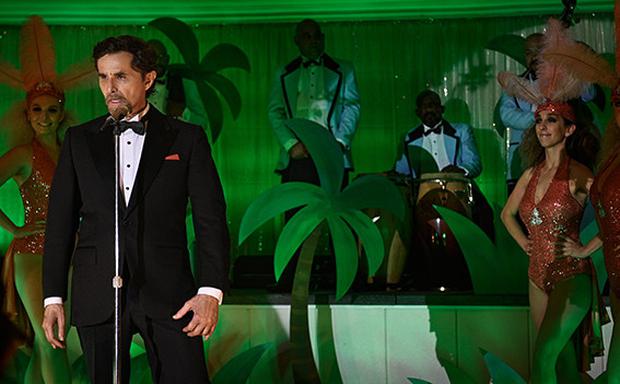 Fabián Delmar, a former heartthrob on Mexican TV from the last century, must start from scratch to recover his fame and fortune, but along the way he faces an even more difficult task: putting his personal life in order. We saw it and this is our comment.

The world of television has moved so fast in recent years that, from one moment to another, perhaps without realizing it, we have such a varied offer that combines old productions in different magnitudes -even from the second part of the last century- with others, much more recent, full of special effects, narrative innovations and casts of global origin.

but recently Star+ has dared to launch a series capable of combining both entertainment models. Is about “The gallant. TV changed, he didn’t”. Starring the Mexican actor Humberto Zuritathis production of 12 episodes lasting approximately 40 minutes, is a dramatic comedy whose plot is pleasant and fresh for the general public.

Canceled at the best time by the owner of the channel that transmitted it, “You will be mine” was the great success that Fabián Delmar (Humberto Zurita) starred in at the end of the last century on Mexican TV. Almost with one arm in front and the other behind, the artist – a fervent believer that ‘look’ trumps talent – ​​fled to become a full-time cruise ship singer. Here he ends up crossing seas and oceans, singing in the ear of Russian ladies who once enjoyed his soap opera translated into their language by the old television industry.

But since nothing lasts forever, Delmar is unexpectedly called to his boss’s office on the cruise ship. He is informed that his shows are no longer going, because as the public is renewed and today they are looking for viral things, now the plan is to reinvent him and make him the protagonist of a show with the undead. “Is seriously? I am an actor, I am not a clown. Don’t fuck with me!”, he responds by puffing out his chest before giving up.

So far we have counted the kickoff of “The gallant”. Our protagonist must return to his country, initially imagining that the fame that “You will be mine” gave him would be enough for him to be received in style. Serious mistake. In the years that he went from cruise ship to cruise ship (and here is the first demand on the viewer if we are talking about verisimilitude) he did not follow the way in which Mexico changed. Of course he is still the same as before. Not only does he maintain his taste for multicolored silk shirts, but he also continues to use a conventional cell phone (brick or ‘zapatófono’, it would be said in Peru). But beyond that, in his head little or almost nothing evolved.

As we said above, this series of Star+ it can well be presented as a dramatic comedy. The first point is fundamentally in charge of Fabián Delmar, a picturesque character from head to toe, a man anchored in the last century, from his gestures to the way in which he decides his next decisions. Seeing how this knackered star discovers that no one on the street recognizes him anymore is absolutely humorous. And in this forced “landing” he is clearly helped by Charly (Darío Ripoll), his beloved representative.

Ripoll’s work deserves a separate point. As Delmar’s agent, friend or sidekick, Charly’s character brings a remarkable spark. The resource of ‘making fun’ of a famous actor turned into nothing is never boring. Getting him “chambitas” at events inside nursing homes or at children’s birthdays are especially endearing efforts. Perhaps for this reason we can say that the weight and time of participation of this manager is much less than desired. Even in one of the side stories of the series – in which he stars alongside his girlfriend Piedad (Dolores Heredia) – everything seems to go too fast.

The second foot of the series of Star+ presents us with a drama split in two. The first is linked to Delmar’s past. How does the owner of Olimpo TV, the channel that brought him to fame, destroy his career without further explanation? Here a visual loop arises that certainly becomes very repetitive. A fact that young Fabián experienced at his peak: while traveling in his car, Melina Leclerc (Ana Claudia Talancón), the daughter –then a minor– of the owner of the channel, appears to seduce him. . This causes a brutal traffic accident of which he remembers everything very vaguely.

The second part of the drama is all about a revelation. At some point in his youth, Delmar traveled to Cuba, where he was captivated by a beautiful mulatto woman (as he himself describes her) who fell madly in love with her. Some time later this woman would give birth to a girl named Cristal (América Valdés). The latter, a Cuban actress who seeks to break into the world of acting in Latin America, has a correct performance. Her role is that of a teenager who has two reasons for her life in music and feminism.

Precisely, this last factor is the one that in one way or another will be questioned when he discovers the link between his mother and Fabián Delmar. An actor who – as has already been said – continues to believe that machismo helped him “so that Russian women stick to him like flies”, or that “they all need a passionate man who makes them feel like women”. But far from creating violent friction or even fights without a solution, the Star+ series approaches this dilemma in a different way, at times appealing to humor, always placing the alleged blood bond above all else.

As Fabián seeks to rejoin the channel that abruptly kicked him out in the 1990s, while also seeking to get closer to who he believes is his daughter, the Star+ series presents a chain of very complete secondary characters. From the protagonist’s mother, the jealous and endearing Rocío (Patricia Reyes), but also to Yadira (Cristal’s maternal grandmother), a Cuban woman who shoots phrases at full speed with the sole objective of protecting her granddaughter from any danger.

If at the beginning of this article we talked about a combination of the last century model of entertainment versus the current one, it would be wrong to end this without mentioning that each of the twelve chapters of “The gallant” has a kind of post-credits scenes. Here we see what would have been the telenovela “You will be mine” with all the peculiarities of late nineties TV. Fabián Delmar is played this time by a young Sebastian Zuritawho for sure looks quite used to the gestures, expressions and movements attributed to the leading men of the time he plays.

“El galán” is a combination of extremely emotional moments, healthy humor in almost all its particularities, also from a correct cast, (Talancón plays an obsessed villain, perfect for this story and Ripoll confirms his humorous capacity in each scene), but fundamentally of a story that, although it begins somewhat weak due to the aforementioned friction with credibility, is strengthened chapter by chapter, generating the genuine desire for a second season.

“El galán”: To see or not to see the new series by Humberto and Sebastián Zurita on Star+?