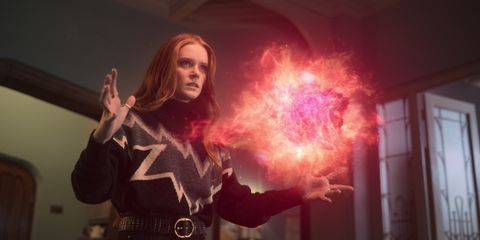 After a marathon weekend with the new episodes, I’m sure fans are already looking forward to the third season of ‘Destiny: The Winx Saga’. A favorite among netflix series, largely thanks to its connections with the animated series ‘Winx Club’ created by Iginio Straffi, the story has taken us down new paths in its second installment (released on September 16, 2022) and has now left some unknowns that deserve response. Your future is now, once again, in the hands of the platform streaming.

Since its inception, The series follows Bloom (Abigail Cowen), a young woman who discovers she has the power of fire. and therefore he enters the Alfea magic academy to learn to control his powers and not cause a misfortune. This study center of the magical world is a secret place for mortals, but not everything will be classes and practices: a threat begins to appear on the horizon, and something that has to do with the protagonist’s past. Luckily he will have the help of Aisha (Precious Mustapha), who controls water, Musa (Elisha Applebaum), who can read other people’s emotions, Terra (Eliot Salt), who works with earthly elements, and Stella (Hannah van der Westhuysen), which is capable of generating light. They are the new Winx.

The Season 2 of ‘Destiny: The Winx Saga’ It continued with this search for Bloom and the struggles of the main group to save their world, but the ending left us with many doubts again. Will there be season 3 of the series? When will the release date be? How will the story continue? Who will return to the cast? We collect everything we know about the third installment of the series.

Nope, Netflix has not yet confirmed the renewal of ‘Destiny: The Winx Saga’ for a third season. This is not necessarily bad news (yet), since it has barely been a week since the premiere of the second batch of episodes. The platform is likely to wait a while before renewing the series, at least to see what audience data the new episodes have collected. Could a cancellation be in the offing? With Netflix it can’t be completely ruled out, but it seems that the fantasy series has found a following and we hope that it will continue with the story for at least one more season.

‘Destiny: The Winx saga’, season 3: who would return to the cast?

We have to wait for Netflix to confirm the renewal of the series to know exactly who will return, who will not and who will join the third season of ‘Destiny: The Winx Saga’. Now, if the series returns, we could put our hands on the fire for these characters, who are the leading fairies and the main cast essential for the story to take its course:

It is necessary to highlight the presence in the second season of Flora, played by Paulina Chávez, one of the most beloved characters of the original animated series and who has returned by popular acclaim.

Beyond the fairies, we would also hope to see a return to Robert James Collier as Saúl Silva, Danny Griffin like Sky, freddie thorp as Riven and Leah Minto like Kat.

Now, we look forward to some exciting new signings as we head into the Realm of Darkness. We will be attentive to all the news.

‘Destiny: The Winx saga’, season 3: how will the story continue?

SPOILERS FOR SEASON 2 BELOW

Though The official synopsis of the third season of ‘Destiny: The Winx Saga’ is still unknownthe last episode has made it clear to us that dark times are coming for the magical world and the protagonists of the series.

Above all, the great plot falls on Bloom and her family origins. The fire fairy has entered the Realm of Darkness in order to close the portal opened by Sebastian and contain the power of the Dragon Flame on the other side. The problem? She has to stay locked up on the other side. Thus, the protagonist is in for a good fight, but she will also hopefully get answers about her mother and her family background.

Definitely, her friends will try to go looking for her in the next season, but in these new episodes they have also had to deal with their own problems. Terra is thriving in her new relationship with Kat, but her battle-scarred cousin Flora is not doing too well and needs time to process what has happened to her.

On the other hand there is Stella, who is also grieving after the death of her friend Beatrix, who sacrificed herself to save the Otherworld, and also Aisha, who continues to explore her complicated relationship with Gray. If we remember, she worked for the Blood Witches that have caused so much havoc among the people she loves the most. Will she be able to forgive him? We will see. Finally there is Musa, who does not want to have her powers as an empath and has become very close to Riven, who seems to help her in her process.

Where will we find them in season 3 of the series? We will be attentive to all the details that Netflix reveals about the synopsis, waiting for them to shed a little light on the biggest mysteries that the second season has left. Patience!

Mireia Mullor
She writes about cinema and series beyond her means, especially if they allow her to talk about forgotten stories from the big screen, feminist claims, the films of Studio Ghibli and Agnès Varda.

They signal a hearing to see if they prohibit Francis Rosas from appearing on TeleOnce while the law...
500 million free tests at home: Biden's actions in the face of the rapid advance of ómicron
'The Squid Game season 2': Date, plot, cast, trailer