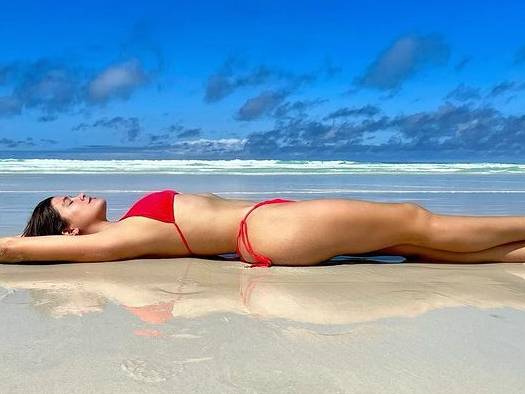 The Cuban interpreter visits the country. He is touring the Galapagos Islands.

He has worked in productions such as Temptations, Mother Moon, Bella calamities, Rafael Orozco, the idol; Wild Flower, Celia Y Loquito to. The most recent through her character as Aura María Andrade in the series Betty in New York based on the original I am Betty the Ugly one, that currently transmits Ecuavisa.

Cuban actress Daniela Tapia arrived in Ecuador two days ago to visit various national destinations. Her first stop has been in Guayaquil, where according to one of her publications she has been delighted with the potato locro.

Currently, Galapagos is the place where you are resting while you travel and learn about the history of the islands. On her Instagram account, she has published images of her in Tortuga Bay accompanied by Christian Byfield Travel, a Colombian blogger, who guides her – in that town – during her stay.

“I have dawned in a paradise, I am like in a tree house, which is made in the mangrove, in front of the sea, and all night I slept with the sound of the sea, which is my favorite, when it breaks with the rocks, and now I woke up and some sea lions woke me up ”, he details in one of his stories.

According to an account on his social network, he plans to travel for seven days in a boat to continue getting to know the “enchanted islands.” This while enjoying the preparations of Almar Restaurant Galapagos, in Santa Cruz.

The actress, on her arrival trip to Ecuador, had Aracely Basurto Calderón, creator and president of Fundación Vivir con Diabetes (Fuvida), as a seatmate, who recounted her journey during the flight.