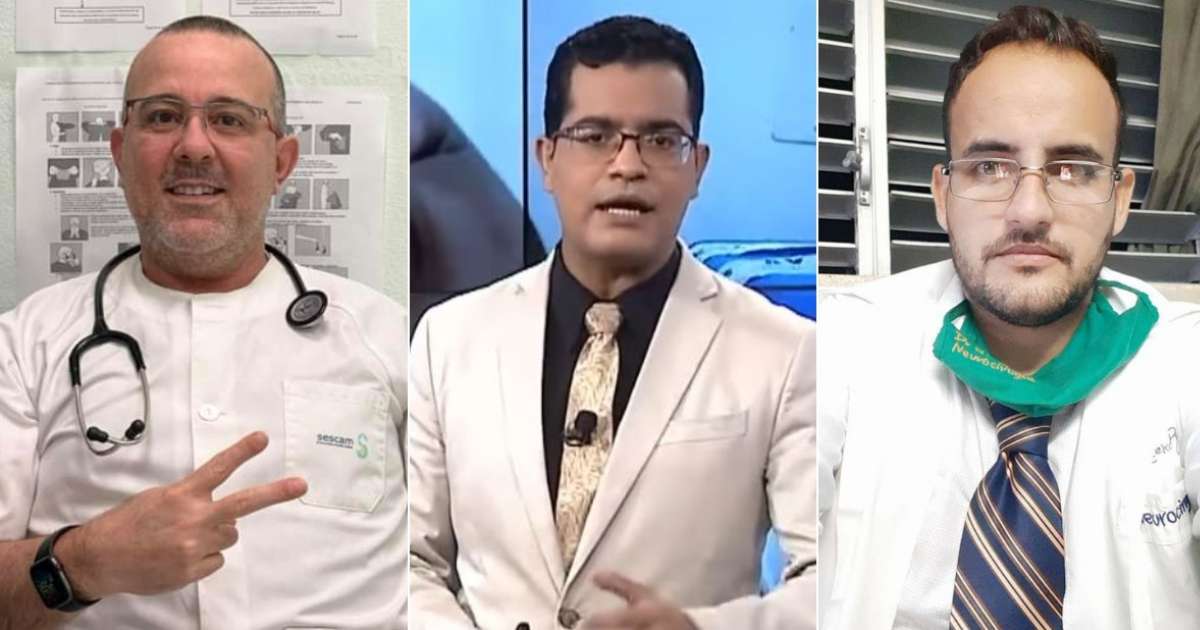 Cuban doctors responded to journalist Abdiel Bermúdez Bermúdez who, in the national television newscast, resorted to discrediting to counter scientific arguments about the immunization process against COVID-19 in Cuba expressed in The mornings of CiberCuba.

Taking advantage of the primetime of the broadcast of the night of this Sunday, October 3, Bermúdez began by labeling as “campaigns against Cuba” and attempts to “discredit the achievements of our country” to questions made by three health professionals in CiberCuba.

The doctor Alexander Jesus Figueredo Izaguirre, addressing Bermúdez as a “pseudojournalist”, reminded him that “neither you nor Humberto [López] ni Lazarus [Manuel Alonso] they have the morals or the dignity to speak of any Cuban doctor, because none of them even reach the soles of our shoes, nor have they done for the country what we”.

The doctor said that he understood that the communicator was following “orders” and mentioned the case of Bermúdez’s own father who “For looking for a better future defected in Ecuador…”.

“You had to wait eight years without seeing it, because your communism banishes in that way everyone who betrays it”, he finished.

The doctor from Bayamo, who in April was disqualified from practicing medicine for political reasons, announced that the Free Cuban Medical Association would explain to him about vaccines, of which, he told him, “you don’t know anything,” and added: “Of course, if you don’t know about journalism, much less about medicine ”.

Lucio Enriquez Nodarse, a Cuban doctor based in Spain, reminded the official journalist that as a medical doctor he is empowered to talk about Cuban vaccines, especially, “When we all know that there [en Cuba] the truth is never told in terms of figures and all kinds of information are hidden or incomplete “.

Based on “the number of infections and deaths from COVID in Cuba” and on the conviction that “the official figures are not true,” the doctor affirmed to maintain the position of your statements to CiberCuba of what on the island “Vaccines are not stopping the wave of infections” that behave “naturally, like a population that is not being vaccinated”.

In this sense, Enríquez Nodarse denied the journalist’s arguments about the high efficacy of Cuban immunogens and the will of the authorities to advance the vaccination campaign.

“It is a lie what Granma published where it says ‘Abdala shows 100% efficacy both in the prevention of severe systemic disease and death from COVID-19’ and this is shown in the table of deceased doctors after having been vaccinated with the 3 doses of Abdala ”, he sentenced.

For the doctor, “mass vaccination” is not a weighty element in his hypothesis of group immunization, nor does it prove the effectiveness of vaccines. “On the contrary, I suspect that this order is to try to camouflage the result of a natural herd immunity with the fact that the entire population has been vaccinated”, Held.

To the journalist’s argument that “Cuba is in the first place in vaccination according to CNN“, The doctor replied that the data” does not say anything either because what is the use of vaccinating with something that does not generate adequate immunity. “

The doctor Alexander Raúl Pupo CasasFor his part, he regretted that Bermúdez, a man from Holguin like him, was dedicated to discrediting Cuban doctors who only gave their criteria as health professionals to CiberCuba.

He reminded him that his university degree was earned by studying the six-year degree when it was not “Investigation”, alluding to the community investigations that students must carry out since the cases of viruses such as dengue, Zika and SARS began to rise- CoV-2.

He also mentioned that his academic results earned him the award of the specialty in neurosurgery, which he was forced to resign due to political pressure due to his complaints of the “Rottenness in which Cuban doctors force us to live”, said.

For Pupo Casas, the interest in speeding up vaccination is not social but economic. “Cuba does not produce anything other than tourism and doctors to enslave in medical missions,” he said in reference to the two items that bring the most income to the country, adding that the rush to vaccinate the population is heading towards the official opening of borders. on November 15.

“And to open borders Cuba needs its population to be supposedly immunized”He specified, although he warned that he has never denied “that Cuban vaccines can provide people with a certain type of protection.”

However, it is not an optimal protection, as explained by the doctor, since “Cuban vaccines are subunit vaccines, which are synthesized from fragments of the layer that surrounds the virus,” he observed.

Likewise, he specified that they are the cheapest to produce and that, by not using the virus as such but a fragment, “They are relatively safe vaccines but they offer low immunogenicity.” This means that “they are more likely to need reactivation doses”.

In addition, he questioned: “If we had 5 vaccine candidates and one of them with 96% effectiveness and 100% protection against serious manifestations of the disease, why was it necessary? bring the chinese vaccines with 70% effectiveness to reinforce Cuban vaccines “.

Another question he shared was “why did they continue to vaccinate when, according to Dr. Duran, more than 70% of those infected were already vaccinated”.

Doctor Pupo Casas, like his colleague Enríquez Nodarse, explained that another of the reservations he has regarding Cuban vaccines is the high number of infections and deaths, including “our colleagues [que] they have died with the three doses of the vaccine ”; the latter, according to list of CiberCuba, they are around 80.

Despite acknowledging that the official figures are not reliable, the professional said that “MINSAP’s own statistics,” reveal the data of 100% effectiveness of the vaccine ” in terms of severe forms of the disease, in addition to the lack of scientific publications that demonstrate efficacy studies.

Finally, the doctor denied the accusations against him of lack of professional ethics, invited his colleagues on the island to tell the truth about the health situation and sent a message to Bermúdez: “Do not lend yourself to shameless journalism, was what he did today. Do not defame a doctor if he does not know what he is talking about, because what he is doing is ridiculous ”.

Often times, the mass media in Cuba are used to defame and slander activists, artists, opponents, and independent journalists who denounce the day-to-day situation in the country. Medical is no exception.

Anyone who tries to cast doubt on the false image of medical power or free healthcare in Cuba ends up being severely sanctioned by power. The cases of Doctors Pupo Casas and Figueredo Izaguirre are just two examples of how the Cuban authorities dispense with their best doctors, even in times of a pandemic, only for reasons of conscience.