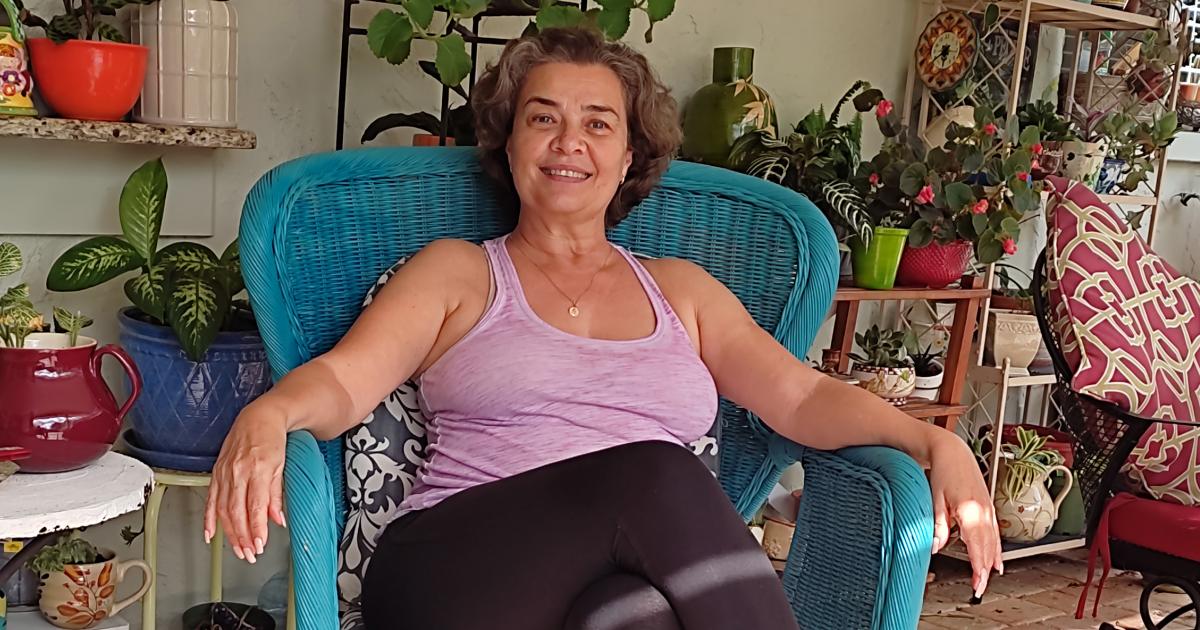 I have known her for many years, since we chatted at the ICRT hairdresser when we were both very young, she more than me. His permanent smile, his serene and sincere gaze, his low and sweet voice captivated all of us who went “on the air” with programs and newscasts or those who were going to record.

How happy I was to see her again in her beautiful home in Cape Coral, Florida, with her husband Rigoberto Morales; home full of plants, paintings, ornaments … all distributed with exquisite taste!

A hug that did not believe in coronavirus was the welcome that my friend gave me, one of the great Cuban actresses who for 32 years animated Cuban television and film spaces with her presence.

Close to her 58th birthday (she does not hide her age because there is also no one to calculate it) on the 8th, CiberCuba visits Larisa Vega, a woman from Camagüey who also loves Havana.

It is a real pleasure to see you again and to try to recount that artistic life that passed so quickly.

Before getting into the actress Larisa, what do you think about informing readers about the current Larisa?

Well, you know, I’ve been in Cape Coral, South Florida for 2 years, a city located about 3 hours from Miami. I have been in the United States for 6 years, I have lived in Miami and Las Vegas and believe me I am very happy here. It is very quiet, cozy, cute as you can see.

I live with my husband Rigoberto who is the brother of that great actress who is Tamara Morales, but I also have my mother Graciela and 2 parents … hahaha, one of whom is the prestigious conductor José Ramón Urbay, who raised me and Arturo Vega , my biological dad who loves me very much. We are a total of 5 brothers who live in Florida and Vancouver, Canada.

I am a proud grandmother of 5 year old triplets, Nicolás, Sebastián and Alexandra, whose mother, Larisa, is my only daughter. They live near here in Fort Myers.

What are you doing?

I am a realtor, that is, a real estate agent, an activity that is enough for me to live as a human being. My husband performs the same function and we are doing well. What do I miss my profession? Yes, of course!

So many years, that ICRT and our usual get-togethers at the hairdresser where we met actresses, singers, announcers, journalists in a kind of peña and how can we forget our magnificent makeup artists and hairdressers Pedrito Oramas, Mayda Ramos, Mercedes Franco, María Julia Cabezas? Oh! Who will forget that!

But despite the longing, are you happy?

Happy? Hahaha. Very happy. I have what I would never have achieved on television or in cinema in Cuba, I can assure you and I am surrounded by my loved ones, what more can I ask of life?

What marks your debut on television?

I was young, only 21 years old, without graduating from ISA, when I made my first foray into television in that unforgettable AVENTURAS space, in Attack Order, directed by Juan Vilar and where Luis Alberto García, Beatriz Valdés and Mabel Roch performed.

The plot concerned the Bulgarian resistance in WWII and I was representing Siriam. I will never forget. From there my life was completely linked to acting. I clarify that my artistic debut was at the ICAIC, with 2 filmsTime to love by Enrique Pineda Barnet and Habanera, scored by Pastor Vega.

From that beginning, my life was completely linked to acting. Between the 80s and 2015, when I came to settle in the United States, I had only one moment of estrangement and that was when my daughter was born in 1985.

Tell me something about your beginnings, did you always want to be an actress?

No. When I was 8 years old, I enrolled in the Provincial Ballet School of Havana because since we were 5 we had moved to the capital of the country. I was a student of one of the 4 Jewels of the BNC, Aurora Bosh.

But I knew I was not going to be a dancer; my thing was to act. Wherever a school show was missed, there I was. So in 1981 I achieved my dream and began to study at the Higher Institute of Art, from which I graduated in 1988 with a Bachelor of Dramatic Arts, specializing in acting.

In the middle of my Social Service I did the casting of the novel Magdalena, directed by Silvano Suárez, and they gave me the role of América, a woman who tries to defend her marriage at all costs.

Precisely, between novels and films, what is the character that has marked you the most?

Look, I can tell you about works that I have starred in, but there are other roles that without doing so, have marked me. They are the cases of Long live Cuba, by Juan Carlos Cremata Malverti, in which I was the mother of the girl who runs away.

I also remember with deep affection a theater on television, Reunion, by María de los Ángeles Núñez Jauma: 2 sisters, Nancy González and I, meet after time has passed and conflicts of interest arise. I won the Caricatos Award as a supporting actress.

They marked me in 1993, For next year by Héctor Quintero and in 2005 the novel Oh, Havana!, co-starring with Roberto Perdomo, which was when I fell while driving my motorcycle, a fall that had serious consequences (all fortunately corrected) and that forced director Charlie Medina to momentarily stop filming, rethink the recording and film the scenes in which I did not appear .

And when you came back what happened?

Uff! Everything was very intense. It was buying time from time but everyone helped me, Perdomo himself and actresses of the stature of Dianelis Brito, Jazmín Gómez and Laurita de la Uz, a tremendous cast that had the work, a highly professional and human cast.

Is it true that you worked with the teacher Lizt Alfonso?

You started out as a dancer but there you didn’t go to dance to the top, did you?

Of course not. I taught acting classes in an environment that was very familiar and pleasant to me and reminded me of my early years in ballet. It was, without a doubt, a beautiful time.

Do you dare to mention to me some of the great Cuban actresses and actors of all times?

(I tell them that Larisa’s face is a poem, too bad I couldn’t take the snapshot)

Oh friend, you have made me very hard. There are so many… I’m going to start with one that has worked directly with me and has influenced me a lot, the unparalleled María de los Ángeles Santana; Maritza Rosales, Luisa María Jiménez, my teacher Herminia Sánchez, Verónica Lynn, Aurora Pita, Martha del Río, Alina Rodríguez, Paula Alí, Gina Cabrera, Raquel Revuelta and 2 who performed other roles in addition to acting, Consuelito Vidal and Rosita Fornés.

I am proud that María de los Ángeles Santana and Tito Junco told me that of my generation, I was one of the actresses who most impressed them.

They always told me that I was very natural, that’s called organicity. That is achieved when you create the character, you defend him, you love him. So it flows. I like comedy, although most of my roles were dramatic.

I have left for the end of this question an actress with capital letters, my friend, the unforgettable Broselianda Hernández, an immeasurable figure of Cuban art.

I met her at the ISA in 1982 and from the beginning we had that empathy, that rapport, that affinity that remained until her unfortunate death … death that shocked me and of which, I ask you please, I do not want to talk.

Larisa asks my permission, she is absent from the room where we have talked about her life and I think that, after so many years being friends, I see a tear on her still very beautiful face. I share her sadness because, coincidentally, Broselianda had granted me an interview for CiberCuba and when she passed away, something that left me astonished, I was preparing the questionnaire.

Upon returning, the actress inside Larisa Vega comes to light. There is little left to ask and my farewell is brief.

Do you miss Cuba?

Sometimes. Here I have everything and I am not talking about material things; do not! to the sentimental ones. I very much missed my home in Havana and above all, my profession. I love my profession and I will die loving it, but here… ALIVE! there? You know that no.