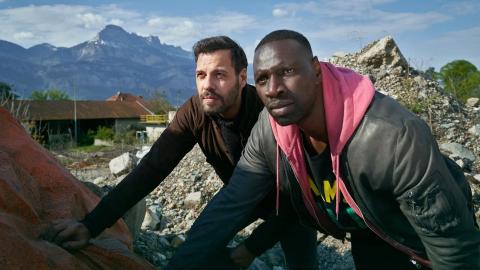 You are happy? Netflix invites you to be one by watching Welcome to Eden, its new teen series premiering on May 6, 2022. Here’s our spoiler-free review.

It seems that Netflix’s specialization in youth series is increasingly evident with products that want to attract, above all, the attention of avid consumers of products such as Elite, although he does it with very diverse fictions, such as the luminous heart stopper or the most morbid The Bridgertons. The range is wide, but the target is quite specific.

In the case that concerns us this week, welcome to eden, the new Netflix series has the luck or the misfortune to coincide with the premiere on Prime Video of the second season of The Wilds with which it shares some notable similarities when it comes to plot. We will talk about it in more detail shortly.

In any case, it can also bring to mind elements of series such as nine perfect strangers either The White Lotus. In the end they all talk about ghoulish side of what seems like an idyllic retreat.

We tell you why: welcome to eden introduces us to Zoa, a teenager who lives with her little sister Gaby and deals with an addicted mother and an almost always absent father. One day she receives a message from her on her mobile terminal: it is an invitation to attend an exclusive party on a paradise island organized by the Eden Foundation with which they promise to make her happy and turn her life around.

Although her best friend has not received the same invitation, they both decide to break the rules to get her to sneak in and live a dream night, but the strict security measures do not make things easy for them. After much insistence, they manage to enter the boat that takes them to an unknown place.

Netflix bets on variety for its May film releases

The night passes, just as they imagined, like a dream… literally. Because the drinks provided on the island make them lose track of time and control of their actions. The next morning, Zoa’s friend has disappeared and most of the young people who went with them to the island have returned to the starting point.

So what are Zoa and a small handful of others still doing there? She doesn’t know it yet, but is part of an exclusive and small number of chosen to join the Edén Foundationsponsored by the strange marriage made up of Astrid and Erik.

Mystery, a privileged environment and all against all

start to see welcome to eden It’s like opening a bag of sunflower seeds: you know that if you overdo it you’re going to feel bad, but it’s impossible to keep eating until you finish it all, even if it’s half a kilo.

So that, its main advantage is that it is tremendously addictive and that, despite not having a crazy budget, it manages to maintain interest until the end thanks to the final cliffhangers of each episode… With an extra incentive! Some brushstrokes are added to the main plot that could lead to a fantastic tone that would be great. It takes time to break, but promises.

We are not going to lie to you either: there are moments that can be passed in 1.5x and nothing would happen, because there is an almost natural tendency in the story to include important blood sausages, such as filler love affairs and a sick concern for diversity in relationships, which are as explicit as they can be (to our regret, because they don’t add anything).

As far as realization is concerned, it must be said that the series exploits its resources well to have its own personality. The diaphanous and austere appearance of the foundation’s facilities contrasts with the tight security control, carried out by means of cameras, drones and jeeps. This leads us to have many aerial shots but also subjective shots of the characters.

The color palette is also very well defined by the uniforms of its members that vary from blue to aqua green. (immediately reminiscent of the green tracksuits from the squid gamealthough in this case there is much more variety).

In general, in this sense, the series is clear that it wants to be modern. Perhaps he even goes overboard with this ambition, betting on very elaborate, ornate and unnatural outfits and very open and changing relationships in which anything can happen… This is a predictable aspect, but the scripts revel in it a lot , with some very video clip moments.

The good thing is that welcome to eden It has room to improve and to contribute… From the casting to the direction of the actors, who sometimes seem to be waging war on their own. The script lacks strength, coherence as a whole, substance to the characters and credibility to the interpretations.

Yes Netflix makes the premiere a test tube, you will realize what aspects you can improve in the formula and, decidedly, betting less on youth drama and bed troubles and more on a fantastic premise, you can give a much more original and appealing touch to the Serie.

Criticism of Welcome to Eden, the series with which Netflix wants to replicate the success of Elite… and that brings a final surprise