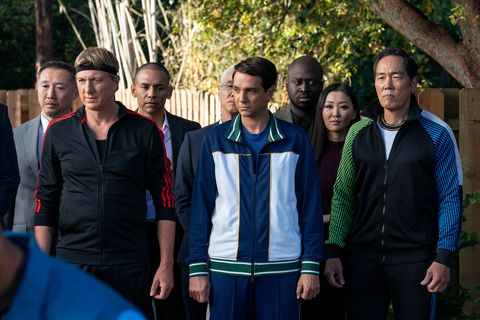 Will there be season 6 of ‘Cobra Kai’? Although still without official confirmation, we hope that the karate time come back one more time between netflix series to offer action, comedy and nostalgia. This late sequel to ‘Karate Kid’ has become one of the most successful series on the platform, and its fifth season has already crept into the best series of 2022.

Created by Josh Heald, Jon Hurwitz and Hayden Schlossberg, ‘Cobra Kai’ brought back the characters of Daniel LaRusso (Ralph Macchio) and Johnny Lawrence (William Zabka) to give them a new chance to shine beyond the 80’s movies. And what we found were two totally different men who will have to learn to smooth things over, leave the past behind and train a new generation of karateka. However, the road will encounter obstacles, or rather, ghosts from the past: great villains of the franchise like John Kreese and Terry Silver will return to haunt them. And that’s precisely what season 5 has been about, now available on Netflix.

Now we look to the future of the series: Is ‘Cobra Kai’ Season 6 Confirmed? When will the release date be? Who will return to the cast? There is still time for us to get more specific questions, but we collect everything that has been announced so far here.

as we progressed, There is still no official confirmation of season 6 of ‘Cobra Kai’, and therefore we cannot guarantee a premiere date.

Now, we must take into account the speed with which the previous seasons have been arriving: season 3 arrived in January 2021, season 4 in December of the same year and, just nine months later, the season 5 in September 2022. The premiere date of season 6 of ‘Cobra Kai’ could point to the summer of 2023but we will be attentive to all the news offered by Netflix to confirm this suspicion.

At the moment, what we know is that the creators have not been fully with the new episodes yet. Jon Hurwitz, one of the creators of the series, responded to a fan saying that, as of August 21, 2022, script writing for season 6 had not yet started.

We also know from Jon Hurwitz that the future looks promising. As he said on Twitter: “All I can say is that we expect more ‘Cobra Kai’ on the horizon and that the miyagiverse it’s far from over”.

We could not imagine the series without its two great protagonists: William Zabka as Johnny Lawrence and Ralph Macchio as Daniel LaRusso. Without them, the series would be a bit of an orphan.

In the cast we also hope to see back:

It’s also likely that we haven’t seen the last of Thomas Ian Griffith as Terry Silver after the season 5 finale.

For now, we will continue to wait for more news about the new season to arrive.

Mireia Mullor
She writes about cinema and series beyond her means, especially if they allow her to talk about forgotten stories from the big screen, feminist claims, the films of Studio Ghibli and Agnès Varda.