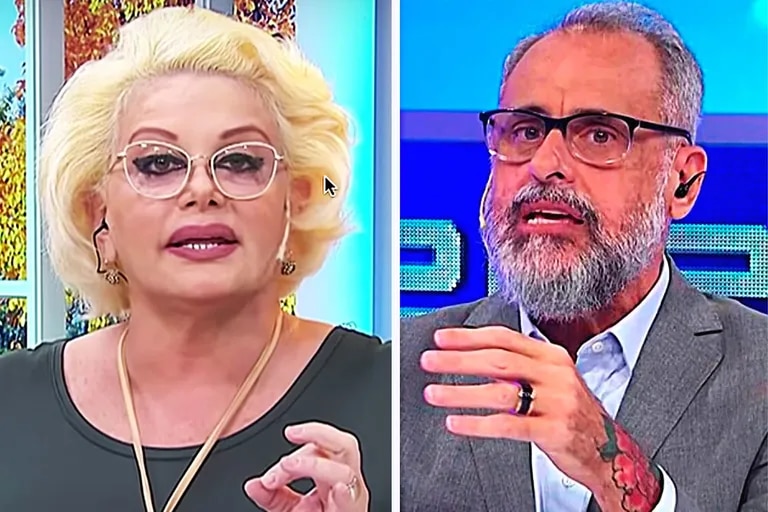 As a result of his separation from Romina Pereiro, Jorge Rial turned on the fan against everyone. First, he attacked the journalist Sebastian “Pampito” Perello Aciarone of the first to state that the driver I was having an affair with a colleague from C5N. Then she rebuked Adrian Pallares implying that he would be unfaithful in his marriage, and finally he also shot Carmen Barbieri; revealing that in the past she saved her from going to jail.

“Did they wake up the monster?”Carmen Barbieri ironized this Tuesday as soon as her program started very morningby Ciudad Magazine, while mimicking a beast. “Did he stop with you for a bit?”, he asked his panelist. After Pampito’s affirmative gesture, the capocómica ironized: “What luck! The same when she can put a sandwich back ”.

The young journalist took advantage of the round trip to ask him about the last words of the formerintruderswhich took aim directly at the actress after she said she had gracefully kicked her out of America years ago. “He said that he saved you from going to jail for an AFIP issue”launched giving the foot to the driver of very morning to clarify the situation: “I wasn’t going to go to jail for that, it wasn’t for the checks that I had given up as lost and for which I had to do 440 hours of community work. If I had to go to prison, I would go, if I messed up for something I had to pay, “he warned.

And then he insisted: “I was not going to go to jail for this and later I will explain why I never told it. Rial, say what you want, what you know about me. The ugliest, the blackest, come and let me take itGet rid of everything you have, don’t stay with the desire. I wait for you as if he were a man. I am a man and a woman at the same time, I keep my house and I go out to fight it every day, say what you want, “she said furiously looking at the camera.

Immediately, the journalist’s words were broadcast yesterday at the radio station, where he revealed that fact that until now had been unknown: “The other day, for example, Carmen spoke and she forgets the day I prevented her from being arrested. One day they call me and tell me that they were going to put Carmen in jail for tax evasion. Me I called the people from the AFIP and I avoided it but well, that doesn’t count for Carmen; I’m sorry, “he said while he clarified that he had nothing to do with his departure from America. “They kicked her out alone because she was doing badly,” he shot.

“Yes, it does count, Rial”Barbieri replied when he returned to the apartment and immediately recounted what happened in great detail: “I always thank you for sending me a friend of yours in AFIP, because he has many friends”, he clarified, turning his gaze away from the cameras for a moment. And she remembered: “Unfortunately, at that time I had Santiago’s son, Santiago and an accountant as a representative; I didn’t even touch silver; they handled all my assets. One day, when Santiago leaves my house,and the AFIP falls with an impressive debt that I didn’t even know I had. It was a millionaire debt that he could not pay. Rial called and was very nice to me. In December I finished paying through a moratorium that he got me, “he said and immediately remarked that he will always be grateful for that episode.

Regarding his departure from America, he clarified: “Yes, you kicked me out elegantly because if not, the channel would have to pay me compensation. You kicked me out by taking things out of me, blocking my way. I was doing very well in rating. He handled the artistic, he had nothing to do with it, no, ”she launched ironically. “I don’t forget because at that time I had a sick Santiago and my little son to support and losing my job was hard and difficult and I left because I couldn’t go to La Plata, I couldn’t be without a dressing room,” she said.

“There was a time when we shared a dressing room, that I had to ask for cleaning because he left it dirty, do you remember? He was very angry with me. You had to go in and tidy up the dressing room. I have so much to tell but I’m not going to get into a fight”, he added.

Far from calming the waters, the capocómica continued to fight: “I never did badly in AmericaI even won the Martín Fierro for best driver. Did you win a Martín Fierro, Jorge? Nerd? Maybe this year you win the gold for threatening so much”, he ironically looked at the camera. And right away, he expressed solidarity with all his colleagues who were affected by the driver’s behavior: “I see how he treats you (referring to Pampito) and Pallares, who is now threatening him. That he messes with Yanina (Latorre), does not suit him, “he said.

“And with me it doesn’t suit you either. I’m talking to you huh, does not suit you. Let’s not fight, I love you very much and I thank you for what you did for me, you are a gentleman in that sense. I feel like he’s having a bad time, that’s why I forgive you for everything you say about me, make up anything. When you’re having a hard time, your heart is broken and your soul is destroyed, everything you say is forgivable. But when you can destroy a family, which is not mine, then it hurts me. My family is my son, my dog ​​and my cousin Adela; we are few. But destroying with sayings, threats and strange versions is wrong, it’s outmoded. Everything has a limit. Be careful when you talk about a woman, not for me, that I am a man and a woman, but be careful with the families, “she concluded in clear reference to Rial’s words about the marriage of the driver of show partners.

This Tuesday, all eyes were on the start of show partners; especially after Jorge Rial’s words yesterday on his radio show, where he lashed out at his former teammate intruders. The journalist implied that Adrián Pallares hides a hidden past and that he would have had lovers throughout his marriage. This morning the journalist echoed his sayings albeit indirectly.

“I just take a minute”said the host, interrupting the presentation of the day’s topics. Before a panel in silence, the driver expressed: “I want to send a huge kiss to my family. To Cecilia (his wife), to my three daughters: Mía, Sol and Emma. Yesterday we had a complicated day, hectic but hey, we’re all fine”.

“So thank you to everyone who has called and been concerned. We are all well and very happy for the start of this program, which is the most important thing. A kiss for them, that I love them and they already know it, ”Pallares confessed to the applause of her companions. “And know that in this program you will always find light, never darkness”, added Lussich sympathizing with his partner and “partner”.