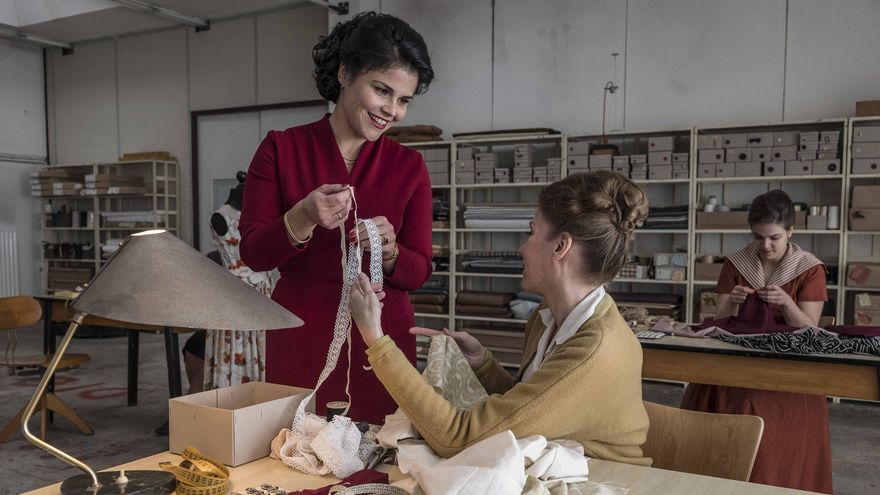 Who said that television programming at Easter is not interesting? Yes Telecinco will give the bombshell on the night of Holy Thursday with the prescient series ‘Zelensky. People’s Servant‘, created by and starring the president of Ukraine, Volodomir Zelensky, when it was still a comedian, Antena 3 offers, also at 10:00 p.m. an interesting German miniseries: ‘Aenne Burda: a life between seams’which narrates the biography of Aenne Burda and the rise in the publishing business of this woman who, in a world of men, revolutionized women’s fashion.

This premise is already attractive, but if we tell you that Burda, one of the first German female advertisers, who built her business at the time of the ‘economic miracle’, was the creator of the pattern magazine ‘Burda’, that became popular in Spain in the 1970s, many ‘boomers’ –those who were able to sew the impressive models shown by the blonde and stylized models (although they did not look so good on them and the result was a bit ‘what you ask for to AliExpress and what comes to you’) as well as those who enjoyed dreaming about the little outfits that could be made if they mastered the art of the needle– will know its importance.

And it is that, after the Second World War, specifically in 1950, the heiress of the family publishing business from Offenburg popularized the ‘auto-tailor’, with that famous magazine with pattern sheets, a fashion publication that achieved great sales success in Germany and abroad. And, in such a difficult publishing world, the publication is still active under the name ‘Burda Style’, which is publishes in 17 languages ​​and in more than 100 countries (in the 1970s there were 125 and in 1987 it was the first Western magazine to arrive in the USSR). After 45 years at the helm of the company, Burda died in 2005 and it is his son Hurbert who is at the helm of the company.

The series, which in its two chapters do not avoid the darkest passages of Burda’s life, such as her husband’s infidelity, which put her in charge of the magazine, and the lovers she had from then on, obtained important audience data in Germany, a country in which she brought together more than six million viewers.

Bring Burda to life actress and director Katharina Wacknagelwho leads a cast in which the most outstanding Fritz Karl, like her husband, Franz Burda; Luise Wolfram as Edith Schmidt; Annika Olbrich as Lise Schneegass; Cornelia Gröschel as Evelyn Holler and Jean-Yves Berteloot as André Lambert, among others. The address is provided by Francis Meletsky, the script is by Regine Bielefeldt and the production is by Polyphon Pictures and Sabine Tettenborn.

In the houses that Thursday night there will be disputes over the remote control.

Burda and Zelensky fight for the night of Holy Thursday