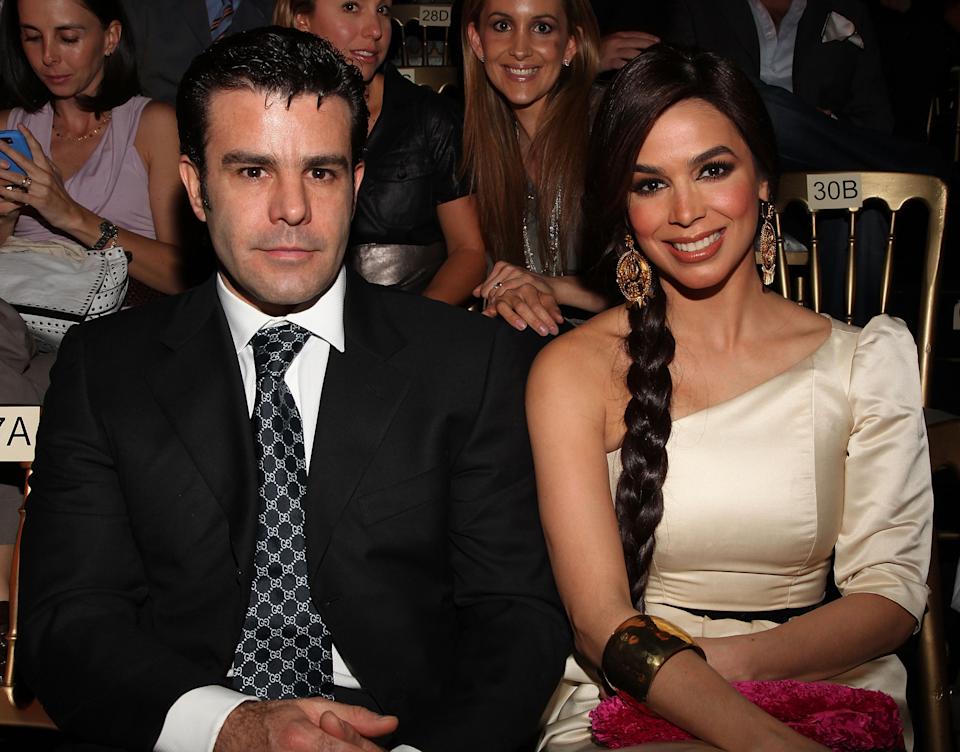 Since her debut in 1990 with the group Timbiriche (who released their album ’10’ that year), Biby Gaytán has become a figure much loved by the public, who have embraced her and have not let her go. At the beginning of the 90s, her popularity was such that she filled concerts as a soloist, starred in successful soap operas, did musical theater and appeared in countless magazines, and even despite the fact that she is semi-retired since she married Eduardo Capetillo – whom she calls love of her life and with whom she has five children – continues to be a favorite in Mexico and in other parts of the world, where her fans continue to love her.

The origin of his stage name

Biby was born Silvia Gaytán Barragán in Tapachula, Chiapas on January 27, 1972, and her childhood nickname, which became a stage name, was inherited from her mother, Silvia, who is a prima ballerina and award-winning teacher. ballet — her father, Daniel, is an architect. The family, in fact, has always had a great proclivity towards the arts.

They are 5 brothers and Biby is the only woman. Chacho and Nano — the older one is part of the recently revived duet ‘Sentidos otros’ with Alessandra Rosaldo (Eugenio Derbez’s wife) while the latter was part of Timbiriche just like her, although they did not coincide in the group; Alejandro, who was born in 1978, and who was a child actor but retired from the field, and Rodrigo o ‘Ruy’, the youngest and closest to Biby, who never pursued an artistic career, but is the owner and director of an art academy located in Villahermosa, Tabasco, where they teach classes in classical artistic disciplines: dance, theater, music and plastic arts.

Biby grew up watching her mother give classes at her own dance academy, and at the age of three she joined a group, studying ballet for years —a discipline that she continues to practice even today—, acquiring an elasticity and slender figure that she has maintained since her childhood. adolescence. She was also interested in acting and singing, so she developed a vocation from a very young age. As a child, she participated in dance recitals, plays at school (she loved pastorelas, she would recall in an interview years later, and in fact Christmas is still her favorite time of year) and improvised concerts at home with her brothers, in which he sang and danced.

At age 17, the three Gaytán brothers learned that there would be auditions to replace Eduardo Capetillo, Thalía and Alix Bauer, who would leave the group to continue their solo careers — Eduardo with ‘Alcanzar una Estrella’, Thalía with the telenovela ‘ Luz y sombra’, which was her first leading role and Alix wanted to pursue a university degree and compose her own songs—and they traveled to Mexico City with her mother to participate, with Biby being chosen to be the launch on the album ’10’ (Nano joined in album 11 and Chacho, who is a multi-instrumentalist prodigy, created his own musical concept) and his life changed forever.

The rise to fame with Timbiriche

Upon joining the band, Biby left anonymity and began to attract attention, in addition to two things that marked her life without her knowledge: she became Diego Schoening’s girlfriend (a courtship that did not last long, but that gave her first glimpse of the media) and met, albeit briefly, the man who would become her husband.

Biby’s dark and natural beauty, her contagious smile and her radiant charisma gave her an unusual projection: it is true that Timbiriche was the first showcase for numerous stars, and in her case it was the last great figure to emerge from their ranks; By joining the cast of ‘Reaching for a Star II’ with Ricky Martin, Sasha Sökol, Pedro Fernández and Angélica Rivera, Biby established herself as a figure in her own right. Her courtship with Diego ended and she left the group to be part of ‘Muñecos de papel’ —the telenovela’s supergroup, in which she sang a song written by Arjona—and later, to start her career as a soloist.

In the interim, Biby became so popular that she was mentioned everywhere — even in the nationally circulated ‘Historias del Rey Chiquito’ comic strip, created by famed cartoonist Trino Camacho, the titular character wrote to Santa Claus to ask for it as a Christmas present and immediately afterwards he would write to Biby to ask her not to be scared when Santa Claus came for her—and her image (which she took great care of) became emblematic, to the point that it is impossible to think of the years 90 without his name being mentioned.

Love and marriage with Eduardo Capetillo

In 1992, Eduardo Capetillo, Paulina Rubio and Biby were the protagonists chosen by Luis de Llano to star in ‘Baila Conmigo’, a nostalgic telenovela that sought to show life in Mexico City between 1959 and 1964, the first rise of the Rock and Roll in Mexico. The cast was completed by Joaquín Cordero, Andrea Legarreta, Alexis Ayala, Claudia Islas, Stephanie Salas, Lorena Rojas, Rafael Rojas (as the villainous scoundrel), Rodrigo Vidal and the very first actress María Victoria, who was the first to realize that among Capetillo (or ‘Guapetillo’, as women called him back then) and Biby, who played the sweet and naive Pili, sparks flew and he told his young companion that if love knocked on his door, he would not reject it.

By then, Biby had had some informal relationships with some figures in the business, such as the Reckless Gustavo Ángel (who, it is said, wrote the famous song ‘Mi vida tú’ for her) or the Spanish singer Bertín Osborne, who was 15 years older than her, but love as María Victoria predicted, happened between Eduardo and her, although they decided to keep their courtship secret for a long time.

He had a reputation as a conqueror and she was not very well seen at first by his family —at least by his mother, Carmen Vázquez, who said so in one of the YouTube capsules where she and Biby share moments in the kitchen and He apologized to her before the cameras, saying that he considered her a daughter and that he adored her, to which Biby told her mother-in-law that she was well reciprocated.

After a year of courtship in secret and much speculation, when Biby was recording ‘Dos mujeres un camino’, which was probably her most successful telenovela because it appealed a lot to the morbidity that aroused in the audience (she was the heroine and got entangled with a married man, and to complicate things, she became friends with his wife, although she did not know it), she and Eduardo discovered that they were expecting a child, so on June 25, 1994, when Biby was already seven months pregnant, the couple married in a massive wedding that was broadcast on television and that gave a lot to talk about, especially when Eduardo announced that by becoming his wife and mother of his children, Biby would leave her artistic career to be a mother and full time housewife.

The fans of the singer and actress cried out in heaven — many still haven’t forgiven Capetillo for making her retire at the height of fame — but Biby decided that her family came first. Thus, in August 1994, her firstborn was born, Eduardo (who wants to be a Mexican regional singer), in 1997 Ana Paula, who is a sensational influencer, Alejandra was born in 1999 —that same year the family moved to Spain for a long time, so that Eduardo could participate in a Televisa production in that country— and her last star appearance was in 1998 in the telenovela ‘Camila’, next to of her husband and Kuno Becker, with Adamari López as the villain. In 2008 they appeared in ‘In the name of love’ in the first chapter.

In 2014, she and Capetillo were surprised when they conceived and had twin sons —Daniel and Manuel, named in honor of their maternal and paternal grandparents— who are lively and charming and fill her time, as well as other sporadic activities she does. like his YouTube channel.

It was in theater and driving that Biby found a means of expression after she got married; Along with Eduardo, Jaime Camil and Chantal Andere, she participated in ‘Amor sin Barreras’ in 2003, then they hosted ‘La Academia’ together, she was a guest jury in ‘México Baila’ and ‘Little Giants’ and in 2019 she joined as the sensational assassin Velma Kelly in ‘Chicago’, although unfortunately the outbreak of the COVID 19 pandemic interrupted her return to the stage.

He also flirted with politics (although he did not reach a nomination) and they had a brief reality show on Univision in 2021 – which had a somewhat cold reception and has no sign of being renewed – and Juan Osorio had announced a series based on ‘The well-bred maid’ (a classic sitcom that María Victoria starred in, by the way), but this project was postponed due to the priority of ‘The Last King’.

But it doesn’t matter: whatever it is, Biby Gaytán is still valid and as loved as in the beginning, with the same simplicity and accessibility that she has always had (that makes her very loved by her fans and that rumor that she was not allowed to speak more than ten minutes with someone who was not from the family or from her close environment, was denied), demonstrating that even over the years, the one who is born to be a star, never loses her brilliance.

ON VIDEO: Niurka boasts what she inherited from her children… and it is not little

Biby Gaytán: the fabulous star who sacrificed her career for love and family