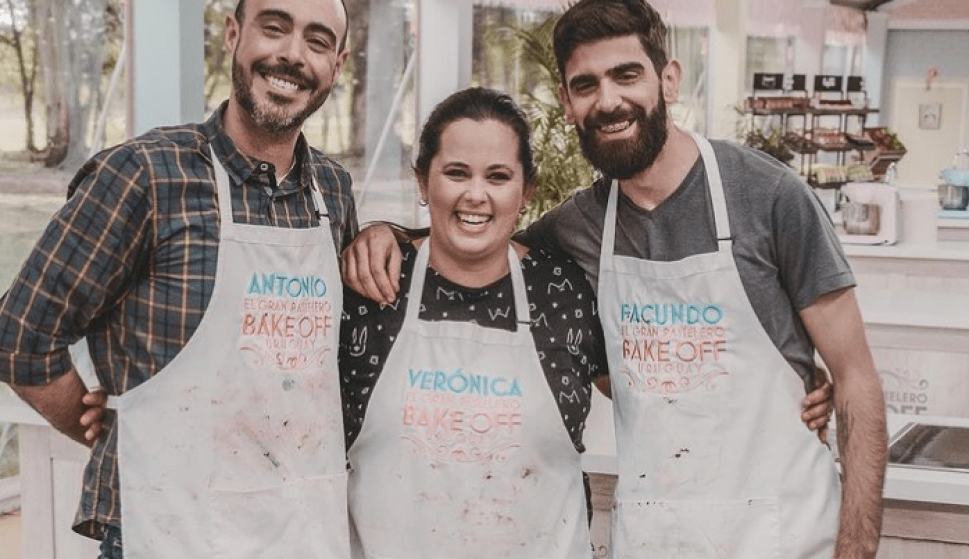 Facundo Amestoy was consecrated as the first great amateur pastry chef in Uruguay by winning the final of the local version of Bake Off. The 31-year-old pizza maker prevailed against Veronica Osorio Y Antonio Deubaldo in a definition of the most contested.

The winner’s name was revealed live from Jacksonville around midnight Thursday. Annasofía Facello was the one who put an end to the mystery by opening the envelope with the verdict of the jury composed of Stephanie Rauhut, Jean Paul Bondoux Y Sofia Muñoz.

The host announced that Facundo became the winner of the program with 53% of the points against Verónica (Antonio had been eliminated in a previous challenge) and the participant exploded with emotion.

“I have no words, I’m super excited,” he said after receiving a group hug from his former colleagues and his family, who were present in this final stretch of the broadcast. “This is a unique experience that I have for a lifetime and it marked me as a person and as a professional. It helped me discover pastry. I want to continue down this path,” he concluded.

The participant, a native of Santa Catalina (Soriano) but based in Colonia del Sacramento, won the trophy as the first amateur pastry chef, and also won 200,000 pesos in cash and another 400,000 in products from brands that sponsor the program.

Bake Off Uruguay closed with Annasofia on the verge of breaking down by thanking those who made the cycle possible and with the announcement of a new reality season in 2022, for which registrations are already open.

Applause and more applause for Facundo! 👏

He is the first great amateur pastry chef in Uruguay to win more than $ 600,000 in prizes 🤩 #BakeOffUY pic.twitter.com/KfGI9GqINU

The tests of the final

To seduce the jury in the grand final, Facundo had to overcome three challenges. The first consisted of representing a colorful support to support a dessert. He chose to make a structure in the shape of chocolate hands that held a pionono of dark chocolate and passion fruit cream. “They are the hands of my wife and my eldest son, who are my support in life and in competition,” he explained.

His rivals were not far behind: Antonio made a striking structure of semisweet chocolate and white chocolate with letters that formed “Bake Off” in tribute to his time on the program, while Verónica carried a stand with daisies and hummingbirds that remind him of his brother. Although the jury was expected to eliminate a participant in this instance, the experts were so satisfied with the preparations that they resolved that the three move on to the next challenge.

Now yes, time is running out and the 3 finalists are in the last details 🙌

This challenge is eliminatory, which will be the 2 pastry chefs that will continue in the final? 🤔⬇ #BakeOffUY pic.twitter.com/6MOyE9vbvs

In the second test things did not go so well. The participants had to make three equal dishes with a brownie ingot, almonds, lime ganache and a creamy raspberry chocolate, which in turn was a replica of one made by the Crandon Institute. This technical challenge complicated the three participants to the point that the jury concluded that their performances had been close to constituting “the worst technical test” since the beginning of the competition.

Antonio was the one who got the worst of it. “I was third!”, He exclaimed after the time to make the preparations was up. It is that the structures of his desserts had completely collapsed without him having time to correct it. “It was armed hot,” criticized Jean Paul. Sofía, meanwhile, was the toughest on the court: “There is a mess in the chocolate threads, the plate is dirty, the brownie is burnt and there are errors in the lime cream.” The speech pathologist’s prognosis was fulfilled and he was left out of the final in the second test.

🗣️ “An Antonio is leaving with a much bigger heart, with more wisdom in pastry and at a human level,” he said.

A great pastry artist who gave everything 🙌

The third and last challenge faced Facundo face to face with Verónica, and it was the one that ended up tipping the balance for the first. The slogan called for making a cake called “my summer” consisting of about three cakes that individually “tell a story.” Facundo designed one remembering his “summer in the country” with an orange and lemon sponge cake, filled with two pastry creams, pumpkin, bell pepper and carrot sweet. It was decorated with fondant figures that made reference to fishing. Verónica opted for her “summer in Montevideo”, with a poppy and orange sponge cake, filled with jam, different ganaches and chocolate. The figures in fontant gave an account of fishing and theater activities.

The jury praised both preparations, but especially distinguished Facundo’s. “All three cakes are nice on the outside and inside,” praised Stefy. Jean Paul added that it was “very good the cake and the filling.” Those of Verónica, on the other hand, had some difficulties. Sofia pointed out that the bath “was thick” and that the fillings “were heavy”. This allowed Facundo to take an advantage that was key to becoming Uruguay’s first great amateur pastry chef.

Facu’s cake was just as he imagined it 🙌

He achieved a fine bathroom, shapes in the decoration and it was beautiful both on the outside and on the inside ⬇ #BakeOffUY pic.twitter.com/BtK5EHdNYn