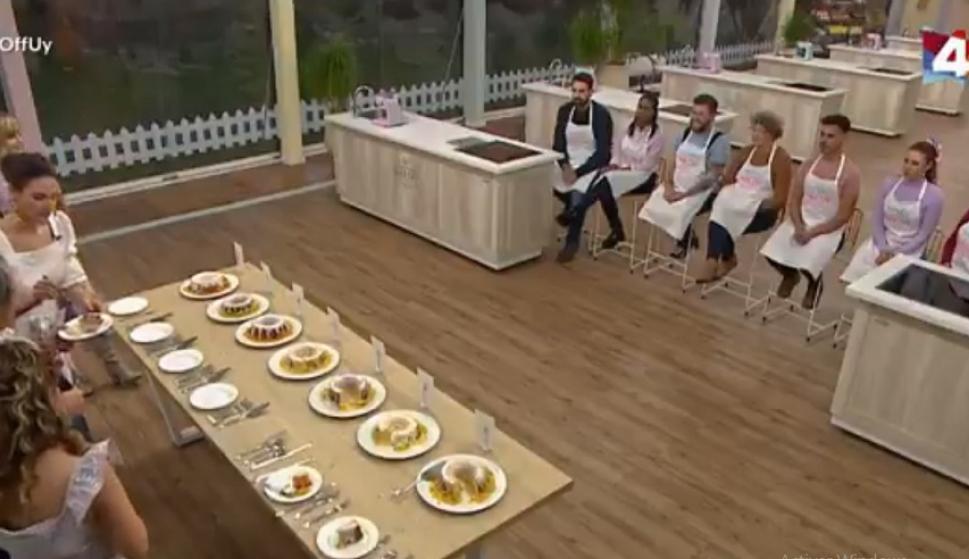 There were seconds to 9.30 when it started Bake Off Uruguay on the screen of Channel 4. The host Annasofia Facello began the program, with the presentation of the contestants of this first season of this well-known format created in England.

Of the 14 members of this season, seven appeared in this first program: Verónica, Graciela, Silvia, Guillermo, Marcos, Juan Pablo, and Micaela. The rest will be next week.

An important detail: from next week, Bake Off Uruguay will go on Wednesdays at 9:15 p.m.

The jurors Sofía Muñoz, Steffi Rauhut and Jean Paul Bondoux (who were correctly subtitled), greeted the participants before starting the first challenge.

After the initial greeting, the first test began, a technical challenge. It was not easy: replicate a cake lemon with glaze. And while the pastry chefs began to cook (they were given the recipe), the jurors in their tent explained the important details for an ideal lemon cake: good crumb, well-candied citrus and just the right acidity.

A blind tasting (the jurors don’t know who made which cake) left the trio happy because they had listened to their advice. After deliberation, the least successful cake was Silvia’s and the best was Graciela’s. “There is experience in this cake,” Muñoz told him in return.

The second challenge was a complicated creative test as it involved the affective memory, that is, those determining memories for the participants. The jurors gave him a single slogan: they had to make a cake with a base diameter of 25 centimeters and with free decoration.

“The emotion of that moment has to translate into the cake,” Rauhut said.

The slogan made many go to childhood memories, others to relatives who are no longer with them, and between excitement and cooking, time in the kitchen is over.

Once the time was up, the participants took their dishes before the judges. Micaela was the first to pass by with a cake filled with rice pudding. The jury loved it.

Guillermo continued with a cake that was a little burned. Then it was Silvia’s turn, who received mixed reviews; It lacked acidity and a “power” in the mouth to Muñoz’s taste. Marcos, as he went to the juries, tried to remember if he had added sugar to the black beer filling. “It’s a subtle cake,” Bondoux told him.

Graciela, the winner of the previous challenge, again received praise from the jury, although they asked her to play it more and get out of her comfort zone. Verónica arrived with a cake that represented the effort it took to build her house. “It is not a cake, it is like a dessert,” Rauhut told him, but added: “Very tasty.”

Juan Pablo was not satisfied; “I feel like I lacked neatness,” he said.

The cake had a pop filling as a surprise, but it was soggy and rare. “Inside the cake did not hit the key. The wet pop did not work,” was what Rauhut pointed out.

After tasting all the cakes, the jury withdrew to evaluate this first challenge and choose the winner and the first eliminated from Bake Off.

“We saw pastry chefs who knew how to comply with the order. In general very well,” said Rauhut. The remaining jurors agreed.

The best pastry chef of the day, who stood out in both tests, was Micaela. “It’s perfect, a lot of harmony and little sugar, just the way I like it,” Bondoux told him. “You work super neat and calm. And you surprised with the rice pudding in a cake. Congratulations, because with that you left us with our mouths open,” said Muñoz.

Two participants were among the worst of the day: Silvia and Juan Pablo. “Your cake was with a design that we liked, in any case it could have been worked better, especially with popcorn,” Rauhut told Juan Pablo.

“For me, the cake lacked power; it has to take you, in one bite, to many sensations,” Muñoz told Silvia. And after these returns, the jury announced that the first to be eliminated was Juan Pablo.