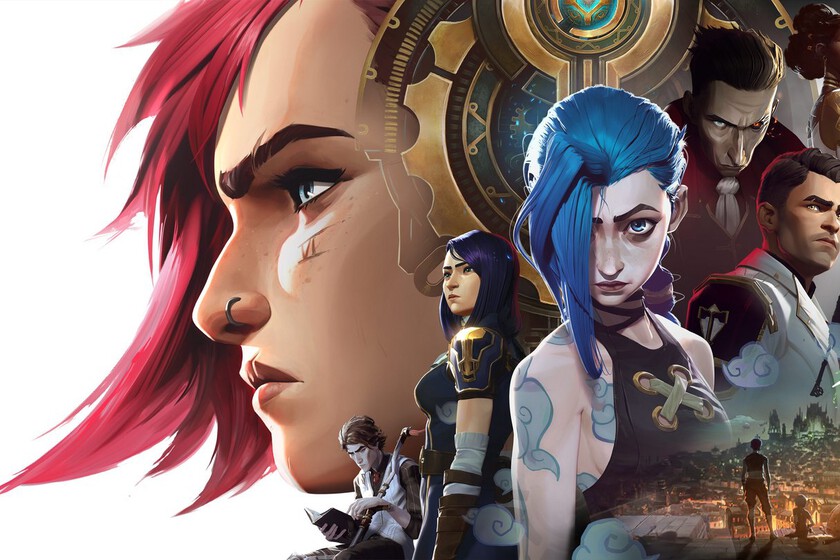 ‘Arcane’ has been revealed in just a few days as a sensation. It has become the most watched series on Netflix, dethroning ‘The Squid Game’ and reaching the first position in 38 of the countries where it has premiered, including Germany, Argentina, France and Russia. In Spain it currently occupies the fourth place, although it has reached the third place.

In addition, it has obtained an extraordinary reception from the public and critics. And Rotten Tomatoes has nothing less than 100% positive reviews, and almost 98% reviews from the public. AND en IMDB it can boast a towering 9.4 based on 12,000 user votes. But … where does the success and devotion for ‘Arcane’ come from? Is it just because it’s inspired by a successful video game like ‘League of Legends’? These are some of its keys.

Based on a massively successful video game …

More than a decade after its birth in 2009, the MOBA ‘League of Legends’ It has become the most followed game of its genre and the most famous esport in the world. With more than 120 million players per month and daily peaks of more than 10 million simultaneous, it is logical that his name is a magnet for immediate success. Its most direct competitors, such as ‘DOTA 2’, still cannot boast of comparable numbers, and the massive and immediate reception of ‘Arcane’ is good proof of this.

… that you don’t need to know in depth

Of those 120 million players per month, only a part know the full extent of the lore of the game, which you don’t need to master to enjoy Arcane. In fact, the story of ‘Arcane’ is set in the past of ‘League of Legends’, and only one of its main characters, Vi, is a recognizable character from ‘LOL’. Her little sister on the show, Powder, has sparked fan theories, that they wonder if it will not be a previous incarnation and with another name of another regular of the video game, Jinx.

Fortiche knows what it does

The French study that has been in charge of setting up Arcane He has no experience in the world of animated fiction, but he is very much into ‘League of Legends’. His are promotional clips about the aforementioned Jinx, for example (watch out for the mechanical dolls, which reinforce the theory that it is Powder, and compare it with the Imagine Dragons video that you see below), or about other characters like Ekko. They’ve also done things like video clips of the Virtual K-Pop group of avatars from ‘LOL’ K / DA Or any short for marvel.

And among the virtues of Fortiche is having injected a very particular style and aesthetic to the series, a kind of sophistication of the character introduction videos they were already doing for ‘League of Legends’. The style, between painterly strokes and computer animation, is full of aesthetic discoveries, and the coloring and design of characters, objects and settings works especially well in things like the contrast between the luminous neighborhoods of the surface where the action and the action start. An area where the protagonists take refuge in the company of the series’ father figure, Vander.

The presence of Imagine Dragons

Although they are not a dish for all tastes, the popular impact of the Las Vegas band is indisputable. They have sold more than 75 million records worldwide, were the most listened to band in 2018 on Spotify and his style is perfectly immediately recognizable. In addition, they have previous collaborations with ‘League of Legends’, such as their performance in the 2014 League of Legends World Championship finals and the release of a special album on the occasion of the event. They participate with their song ‘Enemy’ in the Arcane soundtrack, and the corresponding video that Fortiche has made, which adorns the credits of the series, is flawless as usual, combining images from the series with a virtual version, style ‘LOL’, of the band.

It is, despite everything, an animated series

Unlike so many recent animated series (and inspired by video game hits, like the prequel to ‘The Witcher’ or ‘Castlevania’), where the narrative predominates over the visual, in ‘Arcane’ we have an animated series very aware of the potential of the language it handles. Perhaps because its source is an action game, but the expressiveness, the gestures, the movements of the characters and the design of the sets is pure animation, and it aligns with the visual discoveries of top production companies like Pixar.

Netflix doesn’t want us to do binge watching

In an unusual decision for the company, Netflix is ​​not going to launch the nine episodes of the season at once, but in three runs of three episodes, with the following installments arriving on November 13 and 20, and renouncing the characteristic binge watching O binge episodes with which the platform usually launches its products. The funny thing is that this change in strategy (which is close to what competitors like HBO Max or Disney + do) has been accompanied by colossal success. Will that mean a change in strategy for some releases?

‘Arcane’ sweeps Netflix: seven reasons why it has become the biggest hit in its history