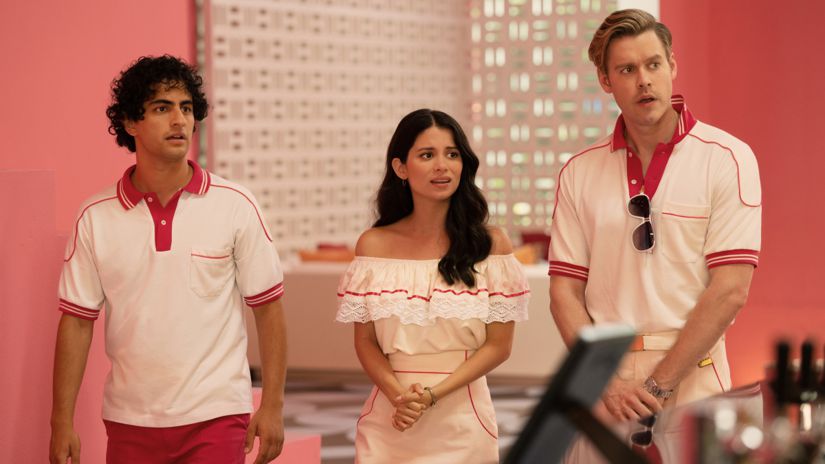 “Acapulco”, the new Apple TV + series Already available on the platform, it was not filmed in the paradisiacal Mexican resort from which it takes its name, but further north, in Puerto Vallarta. Las Colinas, the resort hotel where the plot takes place starring Máximo Gallardo (played in adulthood by Eugenio Derbez and Enrique Arrozin youth), was the set where the cast members remained locked up, recording during the pandemic.

“Those rooms are where we really stayed and where we ate, there we swam in the pool, it was not a bad place to go to work. The experience was incredible, because we really felt like we were in 1984,” he said. Jessica Collins in a meeting with the press, in which he was present RPP News. She and actor Chord Overstreet (known for his role in “Glee”) were the only non-Mexican cast members.

Being in a team where Spanish was mostly spoken was “complicated” for Chord, despite the fact that in the history of “Acapulco“Inside Las Colinas, only English is spoken. However, it also meant something” exciting “, as it had the opportunity to” do something different “.” I had never done or experienced doing another program like this, it was a great opportunity to learning. It is a great life experience and an adventure of what you think, “he said.

While Jessica Collins gave life to a difficult mother, owner of the resort where stars and guests from all over the world come, Overstreet had to incarnate her son, turned manager of a company that generates a strained relationship with his mother. But outside of fiction, the chemistry between the two interpreters was rather relaxed and of mutual respect.

“Jess is the easiest person to work with,” said the actor. And her colleague, who won an Emmy in 2016 for her role in “The Young and the Restless,” added: “I’m such a Chord fan I’m so sorry, I can’t imagine saying that to my son, Diane. [su personaje] it can be very cruel. “

Latinos make their way into the United States

I had already said it Eugenio Derbez, executive producer and star of “Acapulco”: the series may also be a reflection of the Latino struggle in the United States. But what does the outlook look like today for the new generation of Latin American actors and actresses seeking to advance a career in the American television and film industry?

According to Mexican Fernando Carsa, who plays Memo (Máximo Gallardo’s best friend) in fiction, “things are changing, but there is still too much work to do.” For him, there are interpreters, such as Eugenio Derbez or Damián Alcázar (who is also part of the cast of “Acapulco“), who” have prepared the way “for” those of us who come “.

“We are so excited to be part of this project that contributes to this movement that we are trying to create,” he said.

An impression that the Colombian Camila Pérez shared. And he added: “We want to give hope to young actors. If this Apple platform made a show like this, imagine what we are going to inspire on other platforms. This is opening other doors. Eugenio [Derbez] it opened the doors to us in the United States. (…) It’s a tremendous inspiration. “

Another inspiration for these two young actors were Damián Alcázar and Jessica Collins from whose veteran age they took notes to enrich themselves during the filming. Especially for Carsa, whose career is just beginning, as Camila Pérez already accumulates experience with her roles in series such as “Gotham” or “Blue Bloods”.

“Regina Orozco, Vanessa Bauche and Jessica CollinsI consider them my fairy godmothers on set, because they were a very great guide throughout the process, they answered questions from little acting things to topics related to the entire entertainment business, “said the Mexican actor.

We have not yet passed the trailer for the third Spider-Man movie in the Marvel Cinematic Universe, so we are amazed at all the possibilities that the multiverse opens up to us. In addition, we send ourselves to make our ranking with the Spideys of the cinema … although they already know that with us they should not expect traditional arguments.