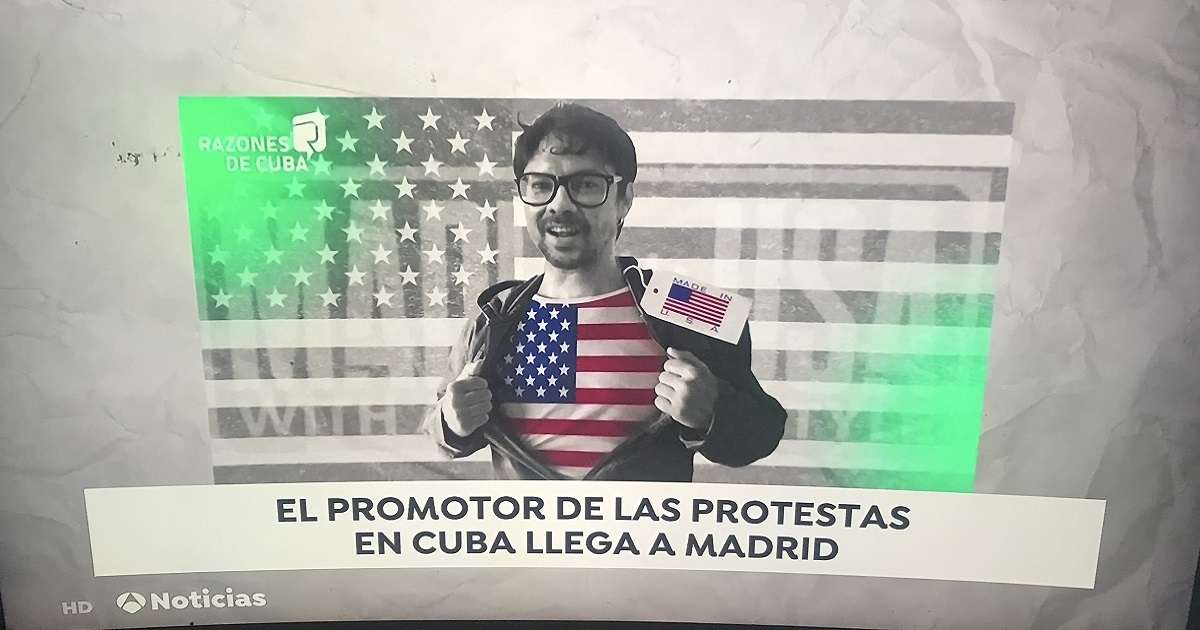 The Spanish television channel Antena 3 used a photo of Yunior García Aguilera manipulated by the Cuban government, to report this Wednesday that the playwright had arrived in Madrid.

In this way, the Spanish media echoed a montage made by the Havana regime to try to link the coordinator of the platform Archipelago with the United States government, accusing it of trying to “destabilize” the country.

The image appeared in October on the official blog Reasons of Cuba, as part of the government propaganda barrage to discredit the Civic March for Change on November 15, convened by Archipelago.

In it, García Aguilera appears uncovering his chest and showing a shirt with the US flag, with a label indicating that the garment was manufactured in the North American country and another large American flag in the background.

With such a montage, whose falsehood is obvious, the blog refers to the playwright as a “mercenary paid by the empire.” However, Antena 3 does not repeat these terms and, instead, limits itself to giving the news of the activist’s arrival in Spain, where he arrived accompanied by his wife, the producer Dayana Prieto.

It also informs that, before traveling, García Aguilera was prevented from marching on November 14, as he had proposed, because repressive groups kept his house under siege in the La Coronela neighborhood, in the Havana municipality of La Lisa.

The original image that the regime took to manipulate it corresponds to an interview that the activist gave to the independent media Neighborhood Journalism.

“That characterizes the dictatorship a little more. They are capable of anything with remaining in power. It is good that these things happen so that the world understands a little better what is happening in Cuba. They have no way to prove anything about him and they do this to him. Cowards !!! ”, said a user on social networks after learning about the montage.

“These minions are the worst. Cuban jurists do not appear, if they had dignity and love for the career they studied, something else would be achieved in the courts. There is a network of infinite complicity ”, said another.

In the early hours of this Wednesday, García Aguilera sent a brief message through social networks to his friends and followers confirming that he and his wife had arrived in Spain and were “alive, healthy and with intact ideas.”

“We have to thank many people who have made this trip possible. I have been without communication for several days and I need to update myself on the situation of other members of the Archipelago. Very soon we will tell the odyssey. A hug! ”, He added.