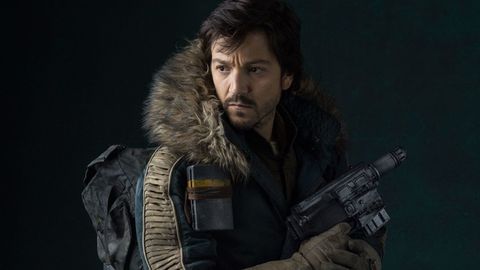 Cassian Andorthe Rebel Alliance captain who procured (along with a team of unlikely heroes) the plans for the Death Star in ‘rogue one‘, it’s back.

The new series of Disney+ of the universe of starwars does not continue the adventures of the character (for obvious reasons), but rather serves as a prequel to tell us the story of Who is it ‘Andor‘ and why he became the figure he ended up being for the Alliance.

In ‘Rogue One: A Star Wars Story‘ already left us some other clue about his past. The character played by diego moon claimed to have been fighting “since he was 6 years old”, “having lost everything” and having made “authentic atrocities in the name of the Rebellion“. The first chapters of ‘Andor’ (we have had access to the first 4) will delve more into these events.

The first 3 episodes, which premiere on September 21, are presented as an extended chapter divided into three parts. It is the presentation of the series, and they do not make sense separately. In them we see Andor as a kind of hustler through the Galaxy, risking his life to locate a person very important to him. The situation is getting out of hand, and a terrible accident causes the Empire to put him in their crosshairs.

Cassian returns to his home in search of refuge, and it is there that we will first meet the sense of community, solidarity, sacrifice and union of the people against the established order that will characterize the series.

Cassian’s home is a working-class city, with metallurgical factories and scrap collectors, where its inhabitants survive as best they can dealing with merchandise of dubious origin and where the police are not well received. You could say that It’s the Birmingham of the ‘Peaky Blinders‘ transferred to the George Lucas universe.

In this city we will meet Bix (Adria Arjona)a resolute scavenger who will act as Cassian’s love interest and as his champion against Luthen Rael (Stellan Skarsgård)a mysterious buyer of material stolen from the Empire who will be Cassian’s entry point into the Alliance.

Yes ‘The Mandalorian‘ and ‘The Book of Bobba Fett’ were futuristic westerns, it seems ‘Andor’ will bet on action, thriller and adventuregetting closer to Ron Howard’s ‘Han Solo’ than to ‘Obi-Wan Kenobi‘ played by Ewan McGregor.

After this introduction of three chapters, the fourth will present us the true objective of Cassian during this first season (the series is already renewed for a second) and will bring us back the odd familiar face and various references to the galactic franchise. But we will talk about them in due course.

Disney+ will premiere the first 3 chapters of ‘Andor’ on September 21and later it will reveal a new chapter a week every Wednesday.

Star Wars gifts that are from another galaxy

Frank Boy
In addition to movies, comedy, and horror, Fran is also passionate about basketball, sleeping, and searching the internet for crazy theories for her show Los Conspiranoicos.

‘Andor’ review: New Star Wars series has the Force on its side