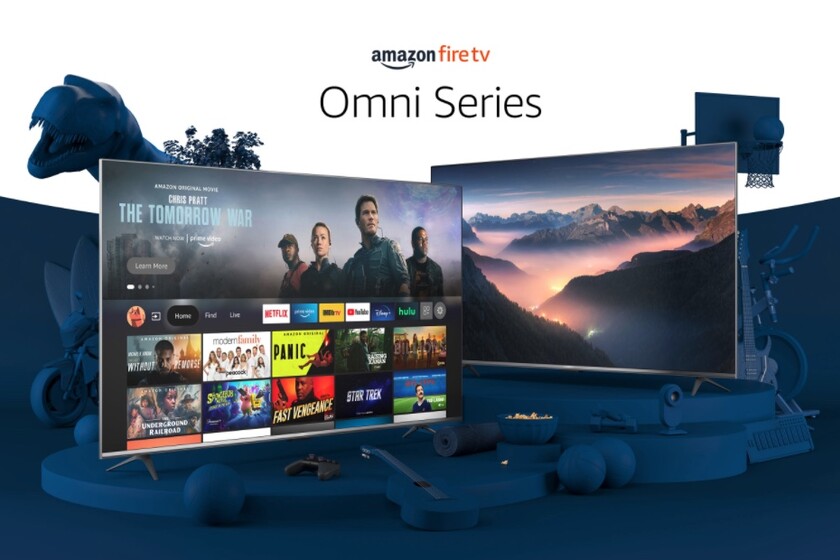 He had to arrive sooner or later: Amazon launches its own TVs. After several years selling the players Fire TV Stick, now the company presents two new series of its own televisions, integrated with Alexa and available in different sizes from 43 inches to 75 inches, as previously rumored.

Months after teach us various basic models, Amazon brings two new series: Amazon Fire TV 4 and Amazon Fire TV Omni, with more sizes, higher image quality and hands-free with Alexa so you can control the TV with your voice without using the remote control.

The most basic series, the Fire TV 4, starts at 43 inches, with higher models of 50 and 55 inches. Meanwhile, the Amazon Fire TV Omni will reach up to 65 and 75 inches, offering just these two sizes a breakthrough in image quality with the addition of support for Dolby Vision.

All Amazon television models offer 4K Ultra HD resolution, which is widespread today. TVs come with a panel Direct LED de 60 Hz no backlight. This is; They are entry-level televisions. However, they do offer some of the most striking features for being models with such a reasonable price.

Fire TV televisions offer support for HDR10 and HLG and in the sound section they arrive with 8W dual speaker. At the connectivity level, all models offer three HDMI 2.0 ports and an HDMI 2.1 port is incorporated that also has eARC connectivity. It is not specified that it incorporates support for VRR or ALLM, which is usually reserved for higher-end televisions at the moment.

The difference between the Fire TV 4 and Fire TV Omni models is in the hands-free management of Alexa. In the basic models we can talk to the Amazon assistant through the remote control, equivalent to the Fire TV Stick. In the meantime, in the Omni TV we can speak directly to the television, as in the Fire TV Cube.

To protect privacy, Amazon Fire TV Omni televisions will have a physical button to electronically disable long-range microphones built-in for voice capture. From the Alexa application you can also access the voice record and delete these saved files.

Fire TV OS is the operating system that we will find inside these televisions. The same system that Amazon already offers in its players and with access to applications such as Netflix, Prime Video, Youtube, Disney + or HBO Max, in EE.UU.

Among the options offered by the integration with Alexa is the wireless management of Amazon Echo devices, as well as new functions offered for the occasion. Fire TV televisions will allow you to perform commands such as “Alexa, what can I watch?”, To find recommendations or “Alexa, play something from Netflix”, to start playing content on Netflix. A feature that will arrive this fall and to date was only available for Prime Video from its operating system.

Two other commands are “Alexa, play TikTok”, where you will access the recommended content of the social network or “Alexa, who is this actor?” works on Prime Video and allows you to ask about the content that is playing.

Fire TV Omni models also include a Picture in Picture (PiP) feature so you can view information from connected devices such as Ring security cameras, without actually stopping the TV broadcast.

As of the end of the year, the Zoom app is also coming to Fire TV Omni TVs, allowing you to start a video call after connecting an external webcam.

New Amazon TVs are available to buy in United States, through Amazon.com itself and the Best Buy store. These are the official prices in dollars for each of the models. We will update if Amazon decides to expand these products to more markets.