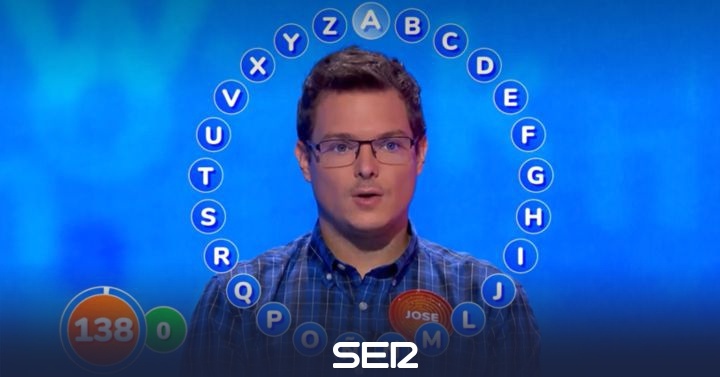 José Antonio Valdés arrived on September 28 at Pass word with the aim of continuing the path marked by other historical contestants of the program such as Pablo Díaz or Sofía Álvarez de Eulate, who was done just a day before with a jackpot valued at 466,000 euros. And the truth is that his career in the program presented by Roberto Leal it didn’t start out bad at all. He passed the first acid test and was summoned to participate in the next program.

This would be followed by a second program, a third and a fourth in which he would end up being eliminated by Orestes Barbero, one of the most beloved contestants in the history of the contest. Several days after leaving the program, the journalist and pharmacist has denounced through social networks the harassment he has suffered through platforms such as Twitter while he was participating in the Antena 3 contest: “Now that the vortex of Pasapalabra has passed , I’m going to for a moment to reflect on the phenomenon hater“.

From the first day I appeared in Pasapalabra (and there were only three, four if we count the one I left!) A wave of hatred emerged in networks that made many people feel the need to insult me, even quoting me, so that I know well that they hated me!

José Antonio Valdés has announced that he suffered a wave of hatred in networks from the first day he appeared on the program. Despite the fact that he only spent three days, four counting on the day he was expelled from the program, the contestant assures that the networks were primed with him, uttering all kinds of insults: “From the first day I appeared in Pasapalabra, a wave of hate in networks that made many people feel the need to insult me ​​”.

The insults, in order of frequency, were “fag”, “repellent”, “pedantic” and “unbearable”, with which we can conclude that more than insults they were descriptions, because all these words strictly conform to reality. pic.twitter.com/B0ptv9Y6Tb

The one who was a contestant on the program recognizes that anyone can write what they want on social networks. In fact, they even accept being insulted if that is what is right for them. What he does not understand is that they summon him through social networks to see all the insults that have been left to him after passing through the Antena 3 program: “Would that be what the insulter would do if he found me on the street ? “

Actually, my reflection goes another way: after generating so much #hate to need to write it in a more or less aggressive tweet (and even, sometimes, quote me), what does the author of the tweet do? Is an infusion prepared? Do you do your math homework? Going out for a walk?

“All these words strictly conform to reality”

After ensuring through a Twitter thread that he was insulted day in and day out, José Antonio Valdés has explained that these people referred to him as “fag”, “repellent”, “pedantic” and “unbearable”. However, despite the fact that each of these insults were uttered with the aim of hurting him, the Pasapalabra contestant preferred to reappropriate each of them and turn them into a description: “We can conclude that more than insults were descriptions, because all these words strictly conform to reality. “

But, in this case … how do you channel the hatred generated by a thug who has participated in Pasapalabra, whom you do not know at all, but who generates that anger in many tweeters and instagrammers? And, better still: what happens to this 21st century that makes these hatreds arise?

In fact, Valdés assures that “fag” cannot be considered even an insult because it is nothing more than a word that is used to describe a man who falls in love with men. By way of reflection, the one who was a contestant on the program wonders about the reasons that lead to a hater to utter insults without rhyme or reason: “How do you channel the hatred generated by a thug who has participated in Pasapalabra, whom you do not know at all? “Fortunately, the contestant recognizes that most of the messages he has received are very kind and full of affection and that he stays with each one of them.

By the way, all this does not make it seem that in the #networks everyone is the same: of course most of the messages I have received have been very kind and loving messages. I have tried to answer everyone. Sorry if I left someone! 😄😄😄