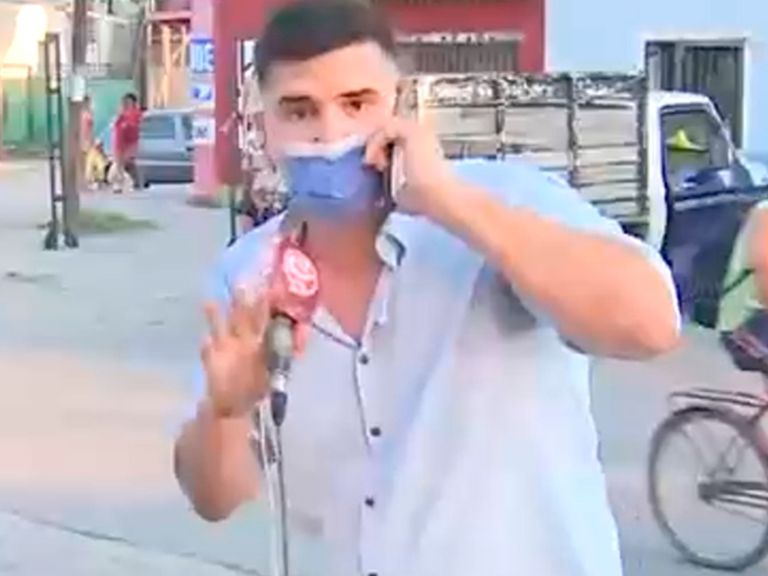 A mobile from Crónica HD covered in Florencia Varela the disappearance of Lucho, a dog who was lost on August 24 and whom his family has been searching desperately since then. However, the news ended up being different: in the middle of the mobile, the journalist Alejandro Pueblas He received a call on his cell phone that forced him to leave the scene.

“You see me? They just broke into my house to rob me. They tell me they broke my window. I have to get off my cell phone. Excuse me. I have people inside my house, they are dismantling it for me. Bye”. And while the driver took his head, the chronicler had to turn around and headed for his car.

True to the style of Crónica, the camera began to follow him. “Give the address for private that we do something”, asked, from the study, Esteban Trebucq, the driver of Always News. And then, Puebla turned around and looking at the camera again revealed the address of his home and asked for an urgent police cell phone. “I’m going home. I go live from there. I apologize for the dog “, said goodbye.

From the study, then, they asked the Third Police Station of Los Hornos, in La Plata, that a patrolman be present in the place. “I am also from La Plata. Los Hornos, together with Villa Elvira, are the neighborhoods with the most inhabitants in the city. More than 100,000 people live in Los Hornos. Do you know how many police stations there are? A. Do you know since when it works? For 20 years. All the governments passed and it remains the same. There are more people and there is more insecurity, because there is more ‘choreo’. The neighborhood is larger than many cities in the interior of the country. Bersisso, which is smaller, has three police stations. Ensenada, which has fewer inhabitants than Los Hornos, also has three, “said Trebucq.

From that moment, on the floor, the different journalists began to discuss the issue, they said that they had communicated with the police and that two patrol cars had indeed already made their way to their home. “He is a kid who has won everyone’s heart. He was chosen the best companion of Crónica. We love him very much. He recently entered, he was made from below. They are people who deserve to do well, but in Argentina good people often do badly”, Revealed the driver, enraged.

“The Third Police Station is seven or eight blocks from the house in Pueblas, in the center of Los Hornos. There, at this time [pasadas las 19.30] With the businesses open, it is an anthill of people ”, the driver continued explaining. And referring to the issue of insecurity, he said: “Sorry, it’s New Year. To the authorities, I know that you do not like this and I apologize. I am full of discussions and debate. No more debate is necessary! Action must be taken! I voted for someone to solve my problems. It is called ‘deliberative democracy’. I voted for them, because I know they are better than us; who know more. So, figure it out. “

And he concluded: “Don’t be asking me all the time what I think. Do it. They have a majority, a minority, the laws that they want to remove, they remove. (…) Begin to resolve the issues, if you have to lower the age of accountability, do so. If you have to put more vigilance, do it. If you have to raise the penalties, do it. Start doing it because if you don’t, we’re not going anywhere ”.

After 8 p.m., from the door of his house, Pueblas spoke about what happened. “I never imagined this. I always screw around with the fact that I’m going to narrate my own news. This happens to a lot of Argentines: they arrive at their houses and do this to them at 12:15 pm ”, the journalist began by expressing himself as he pointed to the window blind of his destroyed house.

“This is my house. When I arrived I found her like this, with the upper window also violated. It is a humble house. I am not a person who has a lot of money, “he continued. Once inside the home, he showed the camera that they had left all his belongings in a mess. “They tore up the television, they took furniture, my daughter’s things were upset … They took money, things that were in the refrigerator (…) But we must continue. I’m not the only one. Every day we cover this kind of thing. If you saw how the bedroom was … It is as if a bomb had fallen, “said the movilero, on the verge of tears.

The driver, then, asked his permission to commit an infringement: “I’m going to tell it myself. For Pueblas, who is a worker, they worked hard for his life savings, which is not a lot of money, but they represent the sacrifice and hard work of many years ”. Later, he confirmed that they had filmed the thief, who was from the area. “There is a witness who saw everything and a security camera that found the one who entered your house,” he informed his partner.

Pueblas, meanwhile, said that at the time the events occurred, her daughter was not at home. “I was with the mother, luckily. I appreciate the affection of the people. When they told me I felt violated, and to come and find this is even worse. All of us who are laburantes know what it costs. What could not be taken, he broke it ”, closed the journalist.

A journalist learned on the air that his house was being robbed: “I have to leave my cell phone”