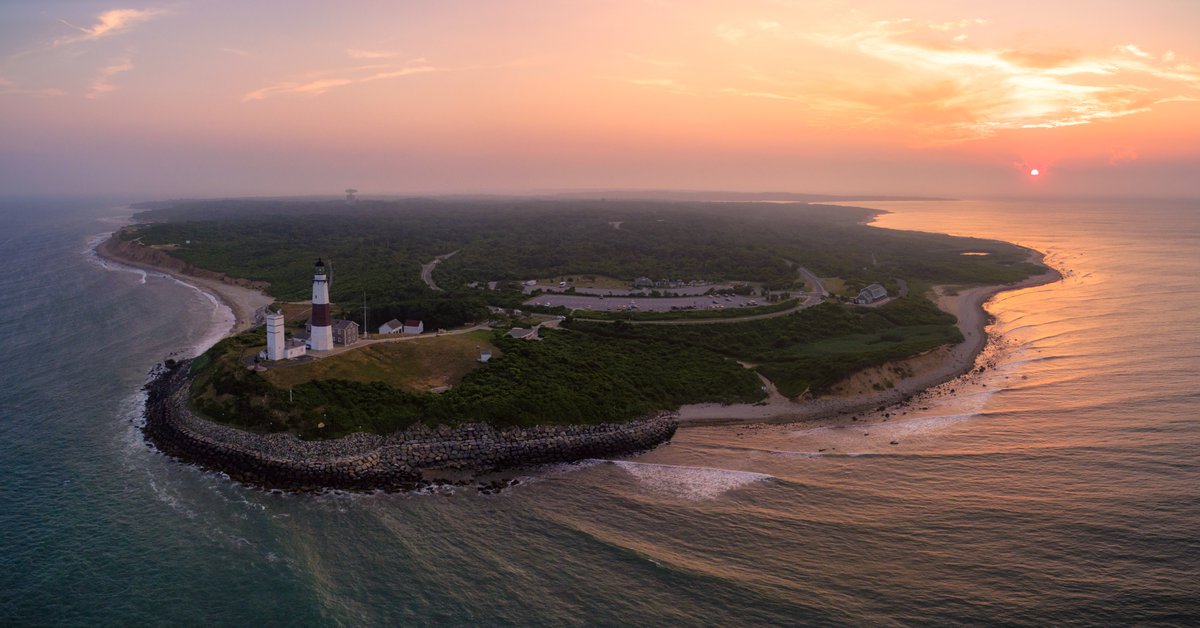 Fans of Netflix have surely seen an extraordinary series that mixes mystery, romance and human relations that it’s called The Affair, created by Sarah Treem y Haggai Levi and that was released 7 years ago, in October 2014.

Noah is a high school teacher in New York and a student at Williams College He has published a novel and is beginning work on his second book. He is happily married with four children, but resents his financial dependence on his father-in-law, a successful writer.

Alison is a young waitress trying to rebuild her life and her marriage after the death of his son. The Solloways make a stop on their way to Noah’s in-laws for a bite to eat at The Lobster Roll restaurant where Allison works and that’s where it all begins.

The Montauk Lighthouse, a typical postcard of the area (Getty Images)

The story of the affair is told separately, with different memory biases, from the perspectives of Noah and Alison. Each chapter is viewed from each other’s perspective.

In the second season, the narrative is expanded to include the perspectives of her first spouses, Helen Solloway (Maura Tierney) y Cole Lockhart (Joshua Jackson) as they move through their separations and all that goes with it.

The Affair explores the emotional effects of an extramarital affair after the two meet in the Long Island resort town of Montauk.

The subsequent death of the brother of Cole, Scott (Colin Donnell), and the ensuing police investigation and criminal trial, are explored with brief future scenes at the end of most episodes.

The Affair gives us the foot to propose a tour from NYC to Montauk. It is a trip across Long Island of just over 3 hours (almost 200 km). The trip can also be done by train, which is a good option. The Long Island Railroad (LIRR) offers a train route from New York to Montauk. In New York, the LIRR stops at Penn Station, the train station in Midtown West that runs from 30th to 34th streets. The main entrance is on the 7th avenue and 34th street, making it a convenient route from New York to Montauk.

Another alternative is the Hampton Jitney. You may recognize it by Sex & the City– The Hampton Jitney is a bus route that takes eager New Yorkers to all the major locations throughout along the Atlantic side of Long Island. To Montauk it costs $ 51 round trip, and it takes just under three hours.

The point is that once in the town of Montauk it is better to have a car. A bike works too, there are several bike rental shops in Montauk, but the most popular is Montauk Bike Shop. As with many popular places in the summer, be sure to arrive early each day to rent your bike, but honestly, the distances between the main sights in Montauk are enough for the car to be a major advantage.

After a murder that occurs in their affluent Upper West Side apartment building, The Arconia, the three neighbors decide to start their own show covering their murder investigation.

Because If you opt for the train or the bus, you can rent a car in town for a weekend.

Montauk is a combination of tourist town and hideaway for New Yorkers. As such, they have a quirky combination of eating and drinking venues that offer acceptable food with great views and hidden gems that will blow your mind. Don’t forget to keep an eye out for local microbrews, such as Montauk Brewing Company and Blue Point Brewing Company, available in most venues.

Montauk it’s perfect for a weekend trip because there are so many ways to spend your time, but not so many that you feel like you missed them if you couldn’t see them. There will also be things that you enjoy so much that you will want to come back in the future.

The village is surrounded by the Long Island Sound and the Atlantic Ocean. Want to go on a sunset cruise? Mon Tiki can do that for you. Are you a fan of fishing? Go to the beach for the best fishing tours with Double D Charters. It can also be done paddle surf con Sunset Surf Shack.

While not a great activity, it is certainly worth exploring Montauk Harbor. Tuna tails can be seen pinned along many of the pylons on successful fishing days, and seagulls can be seen harassing the fisherman as they clean up the day’s catch. You can walk to the inlet to see the various boats coming and going throughout the day.

The Arconia exists in reality. Not by that name, but the property is a unique, high-end building in NYC. His real name is The Belnord

Another must-see is the Montauk Point State Park. There you can look out over the Atlantic from the tip of Montauk Point. You will also have the opportunity to see the Montauk Point lighthouse, dating from 1796 and whose construction was authorized by the president George Washington.

There’s a reason New Yorkers flock to the Hamptons and Montauk all summer long: beaches.

Going to the beach is a wonderful way to spend the day, especially in the heart of summer when the water warms up and you can enjoy swimming in the sea. You can also surf taking advantage of the waves near the beach of Ditch Point and investigate many other fun opportunities on the rest of the beach, where the resorts are closer to the waterline.

Only Murders in the Building:

Only Murders in the Building, known in some Spanish-speaking countries as Only murders in the building is an American mystery comedy television series created by Steve Martin y John Hoffman. The first season of ten episodes premiered on Hulu on August 31, 2021 and can be seen in Argentina on Star+.

It’s the story of three strangers (played by Martin, Martin Short, and Selena Gomez) who share an obsession with a true crime podcast. After a murder that occurs in their affluent Upper West Side apartment building, The Arconia, the three neighbors decide to start their own show covering their murder investigation.

The series has received critical acclaim, with particular emphasis on its comedic approach to crime fiction and the performances of the lead actors.

The series has received critical acclaim, with particular emphasis on his comedic approach to crime fiction and the performances of the main actors. In September 2021, the series was renewed for a second season.

The point is that The Arconia exists in reality. Not with that name, but the property is an exclusive, high-end building in NYC. Your real name is The Belnord and it has been registered in the National Register of Historic Places since April 23, 1980.

It was designed in 1908 by the architecture studio of Hiss and Weekes. It is 13 stories high and features Italian Renaissance-style decorative elements. It has two huge two-story arches that provide entrance to an interior courtyard with landscaped gardens and an original fountain that was restored according to how it looked in the early 1900s.

The Belnord is one of the few full-block apartment buildings in New York. Like other full-block buildings, like The Apthorp, the Belnord is built around a large landscaped inner courtyard. Belnord’s courtyard is among the largest in the city.

The building was acquired by Extell Development Company in 1994 for $ 15 million. In March 2015, the residential part of the building was sold to HFZ Capital Group for US $ 575 million. HFZ hired architect Robert AM Stern to renovate 95 of the building’s apartments, which were sold as condominiums for a total value of more than $ 1.35 billion.

Building It has 175 apartments (with Louis XV style decoration and mahogany finishes) and access to common areas with amenities such as a two-story sports court, a gym prepared for yoga, a kid’s corner, a games room for adults and a common entertainment room that includes the possibility of receiving catering.

The apartments cost between $ 2 million and $ 12 million and stand out for their tall ceilings, white oak floors, wood-burning fireplaces and Gaggenau appliances.

We hope that on your next trip to New York you can enjoy these two options and recreate in your mind the scenes you saw on TV.

The 7 must-see beaches of Punta del Este
Sustainable travel: 12 ways to imitate and be a better tourist
The 9 most expensive vacations on the planet: places where a short stay is around $ 200,000

A fishing village and a luxury building: two places made famous in New York by television