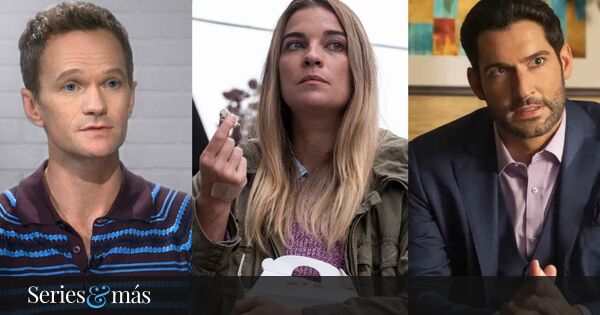 Like every weekend, this one from September 10 to 12 in SERIES & MÁS we bring you three recommended series to watch on streaming platforms: one for premiere, another to get hooked on a marathon and, finally, a gem to discover . With proposals for all tastes and audiences, we suggest a premiere dramatic comedy, a popular series of cases that comes to an end, and a necessary and demanding documentary. All of them can be found available in the on-demand catalogs of Netflix, AMC and Apple TV+.

The premiere you should not miss: ‘Fuck you, Kevin’ (AMC)

Allison McRoberts is pretty and has a sense of humor, although she is often the subject of many of the jokes. Also, she is married to a man who appears to have won the lottery as far as marriage is concerned. But what happens when we follow Allison beyond her husband’s sphere? What happens when you finally realize and rebel against the injustices in your life?

As fans of Schitt’s Creek that we have not yet passed the end of the Canadian series that helped quarantine millions of viewers around the world, we could not miss the first project of Annie Murphy after winning an Emmy for her role as Alexis Rose. The new AMC drama is also an original television exercise that goes beyond the clichés of sitcoms traditional to wonder how those “women trophies” that we have seen so many times on television see the world. Despite the fact that the relationship between the two formats of production (sitcom multi-camera and drama in a realistic key) is sometimes irregular, the experiment ends up being fascinating.

Bored and unhappy as the Lord of Hell, Lucifer resigns from his throne and leaves his kingdom to move to the city of Los Angeles and open a luxurious piano-bar called Lux. Once there, he will help the police to punish the most dangerous criminals in the city.

In 2018, Netflix rescued from cancellation a charming procedural starring Tom Ellis (the heartthrob of British comedy Miranda) in the skin of the dreaded personification of the Devil. The procedural created by Joe Henderson joined the group of series like You, The Money Heist and Manifest, failures in their chains of origin that turned into bombings in their jump to the platforms. Today the sixth and final season of Lucifer, an inconsequential and addictive diversion that could guarantee hours and hours for the next few months. When you’re done with them, rest assured: Henderson will continue to be linked to Netflix with a live-action adaptation of Pokemon.


What is it about

Visibility: LGTBI on television studies the importance of television as a close medium that has shaped the American mentality and the changes it has undergone thanks to the LGBTQ movement. This documentary series, which combines archive images with interviews with key people from the collective and the entertainment world, is narrated by Janet Mock, Margaret Cho, Asia Kate Dillon, Neil Patrick Harris and Lena Waithe. The episodes deal with topics such as lack of visibility, homophobia, the evolution of the collective’s characters and the act of coming out of the closet in the entertainment sector.

“Necessary” is an adjective that is often used indiscriminately when talking about cultural products. After the last months that the LGTB + collective has spent in Spain, this is not the case with the extraordinary documentary series that Apple TV + premiered in February 2020. Today more than ever it is advisable to see the exciting, educational and vindictive review of the rainbow movement in United States what the director does Ryan White while exploring the five phases television has gone through since its inception. Its impressive archive and its spectacular gallery of interviewees (Ellen DeGeneres, Oprah Winfrey, Billy Crystal, Michael Douglas, Billie Jean King, Ryan Phillippe, Raven-Symoné, Greg Berlanti or Norman Lear are some of them) finishes off an inspiring and exciting documentary that let you want to see a Spanish version.

• ‘Fuck you, Kevin’ deconstructs the stereotype of the “protagonist’s wife” from sitcoms