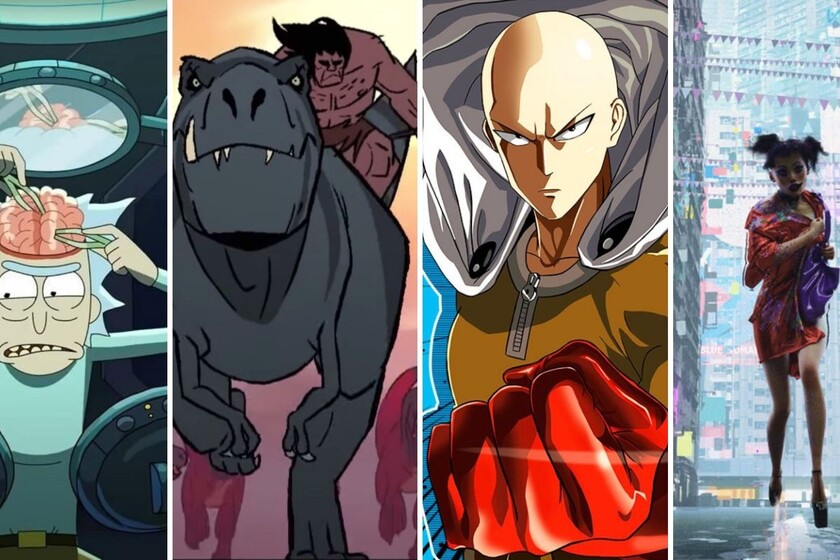 The streaming offer is so high that you can just watch animated series. Among them, we have selected a few that adults can enjoy thanks to their approaches and themes. Not all of them are “only for adults”, but they are all interesting for an audience looking for experimentation, tricky subjects and risky aesthetics.

One of the best productions of Adult Swim is this jewel without dialogue that sends us to a prehistoric era as indeterminate as it is unreal: Humans coexist with dinosaurs here and there are little touches of magic, although essentially it all boils down to insane brutality. Somehow, Tartakovsky (responsible for 2003’s ‘Star Wars: Clone Wars’) manages to inject a credible and essential emotionality into this atrocious world, in what is ultimately a story of a unique friendship between a man and a saurian.

The current animated series for adults par excellence is a salad of science fiction, satire and pure hooliganism that continues to dazzle with the imaginativeness of its scripts, its constant nods to the genre and its unique aesthetic. A fantastic walk through the conventions of transdimensional travel and the trope of the mad doctor and his wacky assistants who, at the moment, does not seem to have reached a ceiling when it comes to his wit. Not even now that it is on the verge of becoming a mainstream product.

The satirical sci-fi series par excellence, a true classic of round characters and pure comedy situations that has not aged the least. The charisma of its trio of protagonists and countless supporting characters rivals similar finds from ‘The Simpsons’, and the best part is that it also serves as a genuine space adventure series and planetary science fiction.

Posed as continuation of the two live-action films, but above all as an aesthetic and plot accompaniment to the second. Unfortunately, the planned continuity of the franchise was frustrated and the thing was in a single season of 19 episodes, but that they have no waste. We will know the cogs of the resistance against the dictator of the network, and all with an aesthetic halfway between the retro-nostalgic and the updating of visual ideas.

An anime classic that does not go out of style thanks to its multitude of overlapping layers of meanings ranging from delusional metaphysics to religious readings (to the Japanese) going through the pure and simple fun of the mecha stories (but passed through the mixer of transhumanism). A series that continues to generate debate and that is worth reviewing so as not to lose perspective of why it has become a mandatory stop for every lover of science fiction.

Tim Miller (Deadpool) and David Fincher (Mindhunter) are the coordinators of this science fiction anthology series that displays multiple aesthetics and styles thanks to the fact that each episode is directed by a different creator. A wide variety of tones, from sci-fi tragedy to futuristic satire, come together in a patchy series out of necessity, but with countless finds in almost every episode. Its two seasons are a must to look at the current adult animation scene.

We could list in this list literally dozens of modern fantasy and science fiction anime series, but if there is one that would be indisputably on this list, it is this marvel that follows Saitama, a superhero who can defeat any enemy with a single punch, which has made him a creature as omnipotent as he is apathetic. Excellent action and fantasy anime as well as a hilarious parody of the genre, it has a breed of priceless monsters and tremendous hyperbolic fighting sequences. At the moment in streaming in Spain we only have the first season (of two) on Netflix and Prime Video. For the second you have to go to Crunchyroll.

A marvel unlike any other series on this list. Made with rotoscope technique (that is, drawings made on images, with which you can recognize Rosa Salazar, Bob Odenkirk and the rest of the cast) tells how a young woman, after an accident, is able to perceive time in a different way than usual. Cast is reflected with hallucinogenic and fascinating effects, in a series that went unfairly unnoticed, but that it is a visual spectacle with a transcendent point.

An anime that assumes the not very frequent codes of the murder mistery with anthropomorphic animals, which in a rather clever twist the series uses as a metaphor. Here, the predators have reached a pact with the rest of the animals not to devour itYes, but one day a brutally murdered alpaca appears, turning this world full of meanings about power relations and their sinister implications upside down.

A vision of very violent Greek mythology, with aesthetics raised to eleven and full of monsters and nightmare creatures. In it, a young man who discovers that he is the son of Zeus must battle against an army of monsters while he crosses paths with the main gods of mythology and engages in battles reminiscent of the aesthetic excesses of ‘300’, but also with a point from the classic films of mythological chimeras.

The fact that after so many years we can finally have Adult Swim in an orderly way and at our disposal (hopefully things like ‘The Venture Bros.’ will be arriving) is a luxury, and few more iconic series within its grid (more even than ‘Rick and Morty’) than ‘Robot Chicken’. This marvel of wild humor made with action figures is already an icon of audiovisual hooliganism, and there are several special episodes dedicated to icons such as DC heroes or Star Wars.

And if we talk about ‘Robot Chicken’ we cannot fail to refer to what its creators, Stoopid Buddy Stoodios, are now perpetrating for Hulu: ‘MODOK‘, a series more or less imbued in the Marvel universe and that recently took the honor of crowning our top of the best television adaptations of the superheroes of the house. Here we have buzzing humor, gorgeous designs and wacky ‘Rick and Morty’ science plots, in a series that is overflowing with as much devotion to the Marvel Universe as it is wanting to blow up its tricks.

A splendid comedy at the expense of ‘Star Trek’ (and official series within the canon, too) that, like the great parodies, it also doubles as a monumental love letter to the franchise. His idea is pure genius (what happens on the lower decks of ships like the Enterprise, where the officers of lower ranks are), and his development, a constant catalog of situations and iconic creatures of the saga, but seen from a deliciously side.