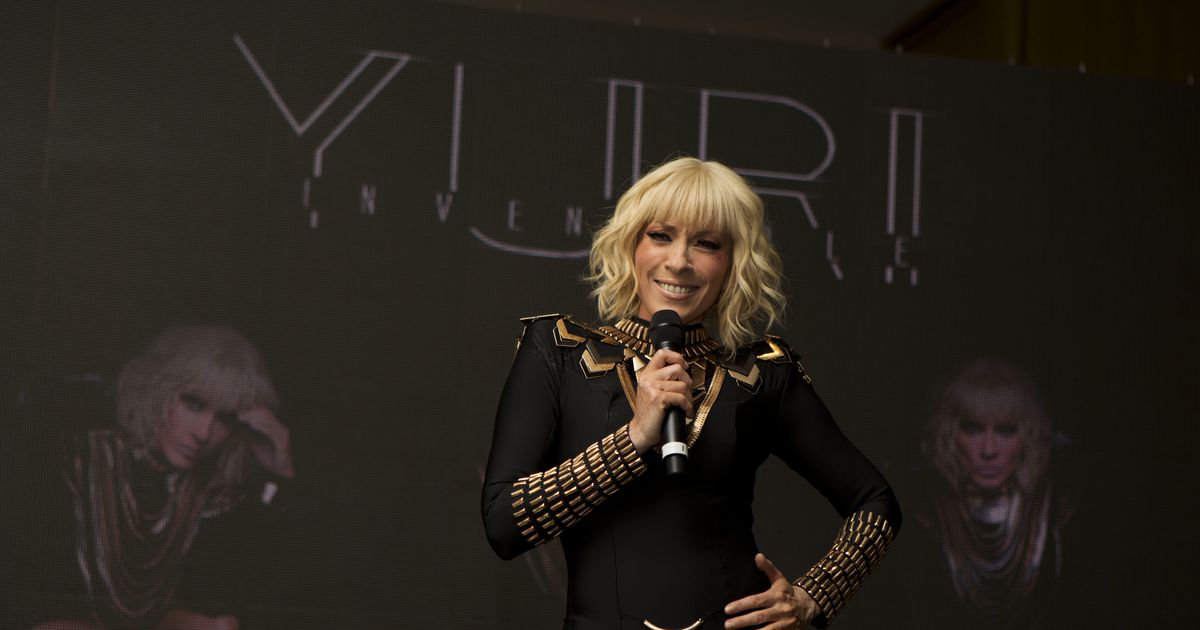 Mexico City — Yuri She has been for 45 years, as she says, “moving the fan” in show business and, to celebrate it, she invited Lucero, Cristian castro, The blue Angels, Marco Antonio Solis and others to record a live album, “Celebrating a Legend,” released on Friday.

Read also: In March 2022 the biographical series about Yuri will be released

But not everything has been rosy in the almost five decades of career of the Mexican star known for hits like “Amiga mía”, “Again,” and “What happens to you.” In an extensive interview with The Associated Press, the Mexican star opened up about her tough beginnings as a teenager and her views on the LGBT community after being criticized for comments deemed homophobic.

“There wasn’t, if we could barely eat once a day,” Yuri said in a recent video call from Mexico City. “My mother would go and steal from the supermarkets, she would put the steaks here in her bra to be able to eat because in the hotel where we were we slept on a little bed.”

“I think we were very sorry to the manager (of the hotel), because he did happen to us to a small room that was a bed, my mother and I slept in a bed back to back,” he added. His mother, Dulce María Canseco, passed away in 2015.

Yuri, who was born in the port of Veracruz in 1964, debuted in 1978 with the album “Tú iluminas mi vida” and obtained greater recognition after participating in the OTI Festival in 1980. Songs like “Esperanzas” and “Maldita primavera” positioned her as one of the most popular singers in Mexico and Latin America the following decade.

In “Celebrating a legend”, recorded last July live at the Juárez Theater in Guanajuato, he chose to sing the pieces of others. With Mijares and Emmanuel he performs “Para amarnos más” and “Toda la vida”, respectively. With Cristian Castro the bolero “Vuélveme a quer”, and with Gilberto Santa Rosa and La Única Internacional Sonora Santanera “Conteo regressive”, one of the songs that cost him the most.

The pop singer explained that for her this salsa was a tongue twister, and said that she “couldn’t sleep” thinking about how she would do that duet.

Read also: Yuri confesses that he once tried to commit suicide

She also sings for the first time in a duet with Lucero, accompanied by Mariachi Gama Mil in Lucero’s classic “Llorar”, and for the occasion she dressed in a traditional charra costume that can be seen in the video for this song, released together with the album.

One of the surprises among the guests is Dr. Shenka from Panteón Rococó with the Sonora Dinamita for the animated “El viejo del sombrerón”, in a mixture that Yuri described as “guacamole with mango”. Whereas “Delivery of love” by Los Ángeles Azules, with whom I had already recorded “Me necessita tú” and their hit “Detrás de mi ventana”, was a challenge because it was not made for a voice like hers.

“The one from Los Ángeles Azules has always been sung by men and obviously it wasn’t in my tone,” Yuri pointed out. “When a song is not in your tone, it is harder for you to sing it.”

Yuri said he was happy to be able to present an album just over a year after having suffered covid-19 along with other people from the production team of the reality show “Who is the mask?”, In which he was part of the jury. He noted that the sequelae, including dizziness, weight loss and problems with the gallbladder (which ended up removing him along with the appendix), were stronger than the symptoms during the disease. It also had effects on a mood level.

“The covid hit me quite hard in terms of emotions,” he said. “There comes a point where you say ‘I’m already tired’, you become very emotional, you become very sensitive … But look my love, as we say there, God squeezes but does not hang, and I know that I am a warrior” .

He recently participated in another reality show, El Gran Pastelero – Bake Off: Celebrity México, where the aftermath of the covid was added a sharp fall in full filming days after she was operated on her gallbladder.

“The doctors scolded me,” he said. “I had a bit of a bad time, I still have consequences from that.”

But as she says, she is a “workaholic” (addicted to work) and not even falls and ailments stop her.

During the interview, Yuri was accompanied by her husband Rodrigo Espinoza, who helped her remember song titles and data. With Espinoza she became a mother by adoption of her daughter Camila in 2009. “It is a privilege to adopt and it is a beautiful thing,” said the singer.

Years later, in 2017, he caused controversy by saying that he considered that gay couples should not adopt, arguing that their children could be harassed. Yuri has been a fervent Christian for years and this has led to some people calling her homophobic.

In October she was invited by the producers of “La más draga” to participate as a jury in the Mexican contest of drag queens, and this rekindled criticism. The reality is that she herself has been imitated by dragons for decades and on a personal level she rejects the label of homophobic.

“I have people from the community in my family, in my family … I have two nieces, a nephew and when I go to Veracruz they look for me,” he said. “We all need love, so if I profess that love and that Christ that I say so much, how am I going to judge?”

In the same way, she stressed that there are LGBT people in her work team, from her makeup artist to her dancers and that she is very grateful for the drag queens who imitate her to the point that sometimes she comes across videos on social media and thinks it’s about herself.

“As I can’t see from afar because of my age, I say (to my husband), ‘where did this show go?’ I open the phone and it is not me, it is the child who imitates me ”.

As for how it has managed to stay in force for almost half a century despite difficulties and criticism, he says the key is “perseverance.”

Yuri celebrates 45 years as a singer with a live album