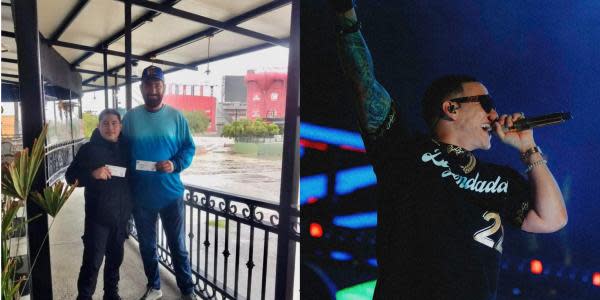 The iconic singer of the reggaeton musical genre, Daddy Yankee, will come to Tijuana as part of “La Última Vuelta World Tour” this Monday, November 21 at the Caliente Stadium, it is not surprising that the pre-sale of his tickets was made months in advance, causing huge lines at the point of sale, however, a Tijuana resident who had lost hope, went through another method to see if he could get a place.
“JM Lara”, as it appears on his Facebook account, was the young man who decided to take a risk and send a message to Jorge Hank Rhon asking him to get him a ticket since he assured that he did not have the money to pay for it, it should be noted that this had started as a game so he posted a screenshot of his message to Facebook, however, a response from Juan Carlos Hank, son of the former president of Tijuana, took him by surprise.

San Diego Red was talking exclusively with Lara to learn about her experience and today she let us know that she had already collected a couple of tickets that were granted to her, in addition to assuring that Hank Rhon’s son was very kind throughout the process.

I arrived and I was very nervous because apart from that I would meet Mr. Juan Carlos in person but the truth is that he received me very well… We were grabbing Cura on the tiger bath
JM added that Juan Carlos’s intention was to give him the tickets at the stadium, however, due to the weather conditions, this could not be done; He commented that he arranged to contact one of his collaborators on Friday to meet with the alderman.

He told us that he is excited to attend the “Big Boss” concert, he hopes to get to know Daddy Yankee and that among his favorite songs are the titles of “Gasolina”, “Somos de Barrio” and “Llamada de Emergencia” .
The sale of tickets for this concert began in August 2022 and they ran out like hot cakes at the physical point, the tickets that were awarded to Lara are located in the North Zone of the Caliente Stadium, so it will have a great view of what will become of Daddy Yankee’s last presentations on stage.

Yes, it did!: Jorge Hank’s son gives tickets for Daddy Yankee’s concert to a Tijuana resident