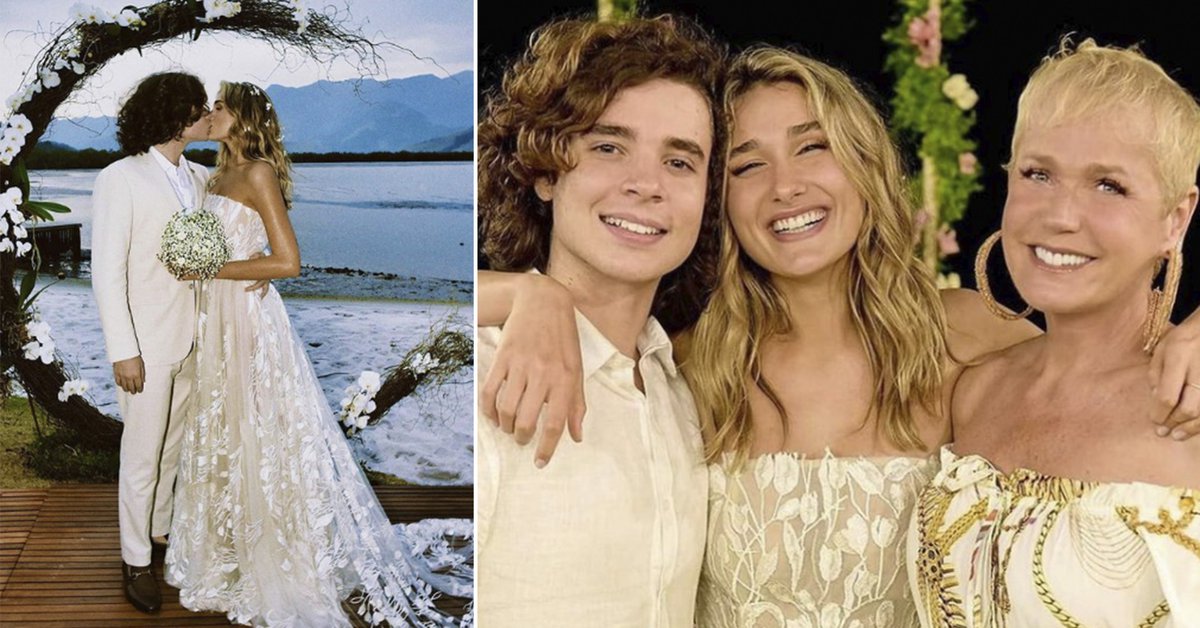 On the beaches of the Brazilian town of Angra dos Reis, 150 kilometers from Rio de Janeiro, Sasha Meneghel, the only daughter of Xuxa, got married with João Figueiredo, a gospel singer. At 22 years old, she -who is a model- and he, 21, celebrated their union with a ceremony by the sea, after getting engaged in November 2020. And both the “queen of the short ones”, as well as her father, the actor Luciano Szafir, they took her to the altar.

Installed in the United States and dating since the beginning of 2019, the newly married couple moved to São Paulo, where João is from. It was after going through the civil registry on May 14 in the Brazilian metropolis. “I married my best friend. I will spend the rest of my life smiling next to you. I promise to love and care for you forever. Sasha Meneghel Szafir Figueiredo“The model wrote that day in a post on her social networks.

“Your happiness is mine. May God give you more and more moments of happiness, I love you infinitely “, wrote Xuxa, who shares her life with the actor and singer Junno andrade since 2012, to congratulate his daughter who before being a model was a volleyball player for the club Flamengo from Rio de Janeiro. The young woman is the result of a brief relationship between Xuxa and the popular actor Luciano Szafir. “It will always be my baby”The cheerleader once assured in relation to the girl she raised practically alone.

His link with our country? “There is always something that connects me with Argentina, thank God. I always say that, although many do not believe me, Argentina was a gift for me. Did you see when one works hard and wins rewards in life? This is a trophy that I will wear for my whole life. I didn’t know it was going to be like this because nine years passed since I finished the program until I returned to Argentina. And when I came back, I told my whole team to forget everything, that we weren’t going to need security or anything. I was surprised to receive a lot of love. It was incredible. Then I understood that my story here will never end ”, Xuxa assured in 2018, in a talk with Teleshow, when Definit came to open, an innovative permanent hair removal center.

And in relation to his daughter, on that occasion he had added: “Sasha is the most beautiful thing in the world, inside and out. She is studying fashion in New York and is doing very well. He is now in the second year and a half of his career at Parsons University, the second largest design college in the world. He likes what he does too much. The first year they invited her to make a collection, the second to do jewelry design. You know very well what you want. I don’t know if she’s going to be a great designer, unless she loves it very much. From a very young age I knew that this path It was not what she wanted. And if she does not want it, I less. I want to see her happy. Now, if one day he changes his mind, I will do whatever it takes to make him succeed ”.

And about how Sasha had lived being the daughter of such a popular figure, she had said: “She went through different stages. When I was very little she did not know well, so it was a lot of fun. Then he was a bit embarrassed because everyone was watching what he was doing. Now he is going through a phase where: “Well, I like that they talk about me, I like that they watch.” He went through all the phases but he always referred to me with great pride. There was never a phase where she denied being my daughter. That was going to worry me more than anything else ”.

Dalma Maradona, six months after Diego’s death: “Every day it hurts more”
What Rocío Oliva said about the absence of Diego Maradona, the possibility of having children and the desire to return to Dubai
Débora Plager debuted at La Academia after her rib fissure: “I’m more nervous than arguing with Brancatelli and Vilouta together”