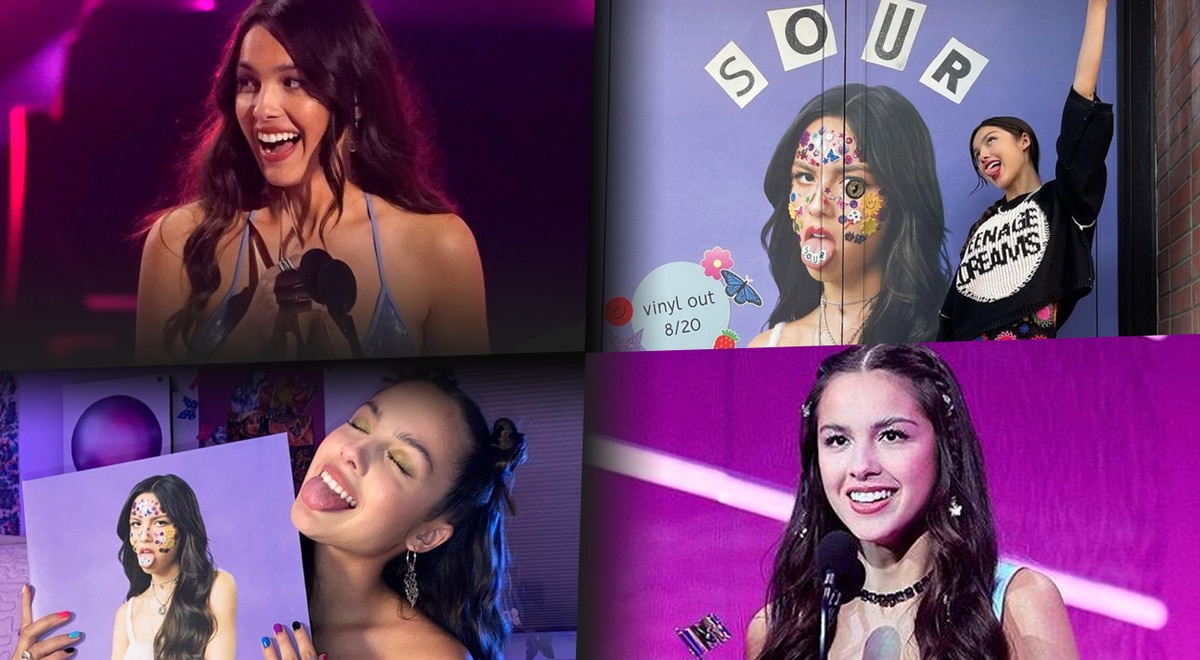 Currently the music industry is targeting Olivia Rodrigo, the talented American singer who has managed to captivate millions of fans, who managed to identify with each of the lyrics of the songs on her first album titled Sour, which includes 11 songs. At just 18 years old, the former Disney girl has become direct competition from other great pop singers with years of experience such as Taylor Swift O Dua Lipa.

The road to his rapidly rising career success began when he released his first single. “drivers licence” in January of this year, which managed to be number 1 of reproductions in Spotify for eight weeks. What’s more, several of his songs have been in the top 10 of the Billboard Hot 100, led by “good 4 you”.

Also, yesterday, shone in the American Music Awards 2021for winning in the category as new artist of the year.

YOU CAN SEE: Olivia Rodrigo reveals the unusual gift Joe Biden gave her at the White House

Who is Olivia Rodrigo and how did she dethrone artists like Taylor Swift?

Currently, Olivia Rodrigo’s name has been ringing out loud. His more than 19 million fans yearn for new content to continue enjoying his music and connecting with their experiences. However, who is this young musical promise?

Her name is Olivia Isabel Rodrigo and she was born in the hot state of California in 2003. After participating in several castings without having any success, at the beginning of 2016, Disney gave her her first big opportunity where she participated in the series Bizaardvark until 2019.

Later, she jumped on the Disney + streaming platform to become one of the protagonists of High School Musical. There she began to develop as a composer by writing and performing part of the soundtrack, as did other great celebrities such as Hillary Duff, Miley Cirus or Selena Gomez.

YOU CAN SEE: Olivia Rodrigo: one of the big winners of the MTV VMAs 2021

“Drivers License”: the heartbreak story that catapulted her to fame

“I got my driver’s license last week, just like we always talked about”, begins by singing Olivia in the first verse of the song that touched the hearts of millions of fans. The story was inspired by Joshua Bassett, whom he met on the High School Musical series and began a relationship that lasted into his early forties.

“And you’re probably with that blonde girl who always made me doubt, she’s so much older than me, she’s everything I’m insecure about”, sings in another verse of the second verse.

Composing sad songs is one of his favorite activities, as he declared for an American medium. “When I wrote ‘Drivers license’ I was going through a breakdown that was very confusing and very multifaceted. Putting all those feelings in a song made everything simpler and clearer, at the end of the day I think that’s the real goal of writing. There is nothing like sitting at the piano in my room and writing a really sad song. It’s my favorite thing in the world. “.

From the beginning, the 18-year-old artist has been a staunch fan of the powerful Taylor Swift. When his first single began to sound on all musical platforms, he also managed to position himself behind Taylor’s songs and even surpassed them.

According to Billboard, Rodrigo placed eight songs from the album Sour in the Top 10 in the United States, breaking the record of the singer of “All too well”, becoming the female artist with the most number of songs on that list simultaneously.

Given this, Taylor published the following message on his social networks: “I say that you are my baby and that I am very proud of you”.

YOU CAN SEE: AMAs 2021 and BTS: winners and the complete summary of the awards

In July 2021, it was shown that Olivia Rodrigo is more than just a passing artist having been needed by the Biden administration. The artist who achieved that his single “good 4 you” has been the most listened song in the whole planet with almost 600 million reproductions, was requested by Joe Biden himself.

It turns out that the White House opted for her to carry out a campaign that sought to encourage Americans to get vaccinated against COVID-19. He met with the president and the government’s chief epidemiologist, Anthony Fauci, to learn more and then create a series of videos inviting Generation Z to get inoculated.

As a detail for the gesture, Joe Biden showed his appreciation through a series of curious gifts to the singer and actress.

YOU CAN SEE: BTS and AMAs 2021: winners list and performance of “My universe” and “Butter”

“He gave me (aviator sunglasses), he gave me some M & M’s and he also gave me a shoehorn, which was weird (…) Seriously. It had the presidential emblem. This is my house. I didn’t see it when he gave it to me. It was in a bag. I opened it (later) and was like ‘oh that’s great,’ ”he revealed.

The musical future of the new queen of pop

Now, the young singer, Olivia Rodrigo, who could win a Grammy in 2022, is working on new material and his fans can no longer wait. Meanwhile, Cosmopolitan magazine has been commenting that the artist would be preparing her second album, which could be called Sweet.

According to his fans, the biggest spoilers come through merchandise he sent to various celebrities like Kim Kardashian. It is about some candies with the motto “sour then sweet”. Fans say that after having released bitter and sad songs, he now plays sweet songs.

Who is Olivia Rodrigo, the 18-year-old singer who dazzled at the American Music Awards?