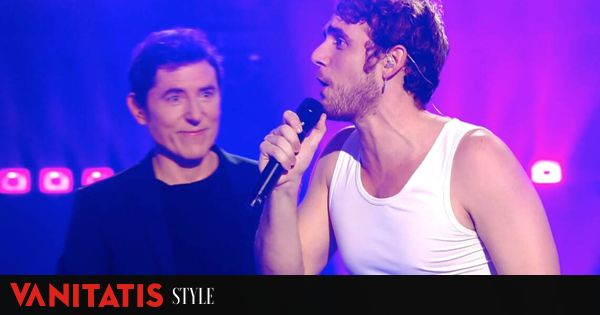 Very few viewers of the second program of the guessing musical show ‘I see how you sing’ recognized in the Lumberjack, one of the nine mysterious singers, someone whose voice says more about him than his face. Neither did one of the judges, Lolita Flowers, who requested not to eliminate the contestant more for enjoying his physical presence than for thinking that he sang well. “I should have a separate appointment with the woodcutter to see if he sings or not.”said the artist then.

But when Manu Pilas He began to demonstrate his vocal skills by interpreting the ‘Nessun dorma’, in the program everyone was impressed with his jet of voice. “I’m dying, I just fell in love”, He said Ruth Lorenzo while Lolita did not know where to go and ended up lying on the ground.

We’re still freaking out with last night’s performance of @Manu_Pilas, original voice of the famous version of ‘Bella Ciao’ in #LaCasaDePapel 💥 # I See How You Sing pic.twitter.com/GEoPl30W4y

It was the presenter of the space, Manel Fuentes, the one that revealed that Manu was the one gave voice to the now mythical song ‘Bella ciao’ How well do the followers of the series know ‘The Money Heist’, of which he sang a fragment before saying goodbye to the contestant with a “sorry for singing well”. This popular Italian song that was adopted as an antifascist resistance anthem has also become an anthem for Netflix’s most famous robbers.

“Nobody expected the great repercussion that it is having, in Latin America, in Europe … it is impressive. I found out because one day a friend told me ‘Hey, is this you?’ and he sent me a YouTube video with more than 11 million visits “, explained Manu about the tremendous success that had her vocal appearance on the series during an interview with ‘El País’ in 2018.

The music is in the blood of this tenor that we have enjoyed in musicals such as ‘The Miserables’ or voicing adult Simba in songs from the movie by ‘The Lion King’– Your parents can boast of a long and brilliant career in the world of music.

His mother, Sun Batteries, has been a showgirl for artists like Miguel Bosé O Isabel Pantoja and has gone to Eurovision accompanying Anabel Conde and Mikel Herzog. He has also lent his voice to numerous cartoon television stations and even to the playbacks they made the famous Mamachicho.

For his part, his father is a bass player with a broad career in television shows such as ‘The semaphore’ or ‘The game of the goose’, and that now alternates participations in ‘La Voz’ with the copla program ‘A tu vera’ on regional television in Castilla-La Mancha.

Along with him, Manu is about to release his debut album, ‘In the name of the Father’. It is an album that he has financed through crowdfunding and that is based on old compositions by his father. A job that is the fruit of five years of effort.

“For me it has been the challenge of my life”, assured in an interview with ‘El arcón de Natalia’ the musician who will also participate in the talent show ‘Sing me how it happened’ de La 1. “Professionally it has been the most difficult thing about working with my father, and singing the songs as he knows they have to be sung, with the exact tempo. It has been an impressive challenge. Working with my father doing things well and knowing how to do them, it is the most difficult thing that I have faced in my life. three or four days to put your voice in and make it perfect, that nobody can say that this is not swing “.

In his social networks, which have increased in followers since his time on ‘I see how you sing’ and to which he has just added an account on TikTok, he informs his fans of his latest musical news, such as the tour he has just carried out together to Melendi. We also see him perform duets with his partner, the also singer Judith Tobella.