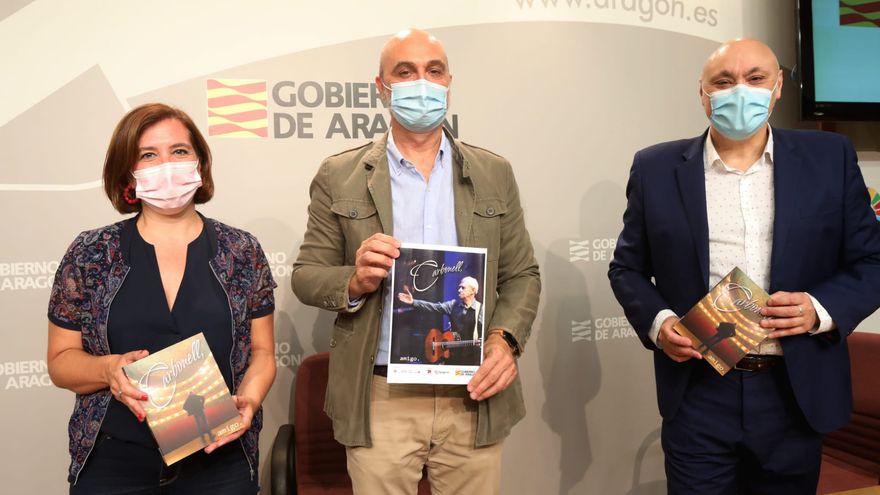 Sara Fernández, Víctor Lucea and Gabriel Sopeña, this Monday at the presentation of the tribute at the DGA.
ANDREEA VORNICU

Everything is ready for the Mozart room of the Zaragoza Auditorium to host the tribute concert in memory of Joaquín Carbonell on September 21, died a year ago as a result of covid. The act, which will start at 7:00 p.m.It should have been held in January, but the pandemic prevented it. The change of date, however, has not prevented maintaining the large roster of artists, including names such as Joan Manuel Serrat, Loquillo, Ismael Serrano and Javier Ruibal. Only two have fallen from the poster due to scheduling reasons (and much to their regret): the rapper Kase.O and the actress Laura Gómez-Lacueva, who was going to present the gala with José Luis Esteban (Yolanda Blanco will replace her).

Few lucky ones, only 934 people, you will be able to see this cast of artists singing and covering the most emblematic songs of the singer-songwriter from Alloza. In January, some 400 tickets had already been sold, but now the capacity limitations are less restrictive, so anyone who wants to attend can still do so. Tickets will go on sale this Tuesday from 1:00 p.m. at a price of 10 euros both at the Auditorium ticket offices and on its website.

The DGA, promoter of the tribute in collaboration with the Zaragoza City Council and Aragón TV, has put all the meat on the grill to put together a show of the first order. Under the artistic direction of Gabriel Sopeña, music (how could it be otherwise) will be the backbone of the gala, which aims to be “agile” and not exceed two hours in duration. The presenters will string together each of the performances, which will include videos and projections. “Its three stages will be covered: the rural one, the ‘afranchutada’ as he called it and the more cosmopolitan and urban one that he ended up with, but it will not be in chronological order,” he explained this Monday at the presentation of the Sopeña tribute, which has pointed out that The Canal Band will be in charge of entertaining the entrance of the audience to the Auditorium.

A band with ‘its’ musicians

They will all be accompanied by an exceptional band (the majority of musicians who accompanied Carbonell in his last stages): Richi Martínez, who is the musical director of the gala, will be in charge of the piano and keyboards, José Luis Arrazola of the electric guitar, Roberto Artigas of the banjo and ukulele, Chabi Benedé on acoustic guitar, Quique Casanova on drums, Kalina Fernández on violin, Miguel Isac on percussion, Satur Rodríguez on bass and Silvia Solans on backing vocals.

«Now we are going to be able to pay the tribute that Joaquín deserves», has highlighted the general director of Culture of the Government of Aragon, Víctor Lucea, who recalled that the tribute began to be forged together with the singer-songwriter family already in the burning chapel that took place in the Pablo Serrano museum.

This tribute will be added to the one that Alloza, his hometown, gave him this past SundayWhen a bust was discovered, two singer-songwriters performed several of his songs.

In addition to the Auditorium concert, the tribute promoted by the DGA includes the edition of a book with the testimonies of 40 friends and colleagues of Carbonell (many of them prominent personalities from the world of culture). The publication, which has already been published, will not go on sale and will be delivered to attendees at the recital on the 21st. However, as Lucea commented, the book will be posted on the Cultural Heritage of Aragón website.

The commemoration will be completed with the making a documentary which will include testimonies and interviews with various protagonists and in which the assembly of the gala and the previous rehearsals will be collected.