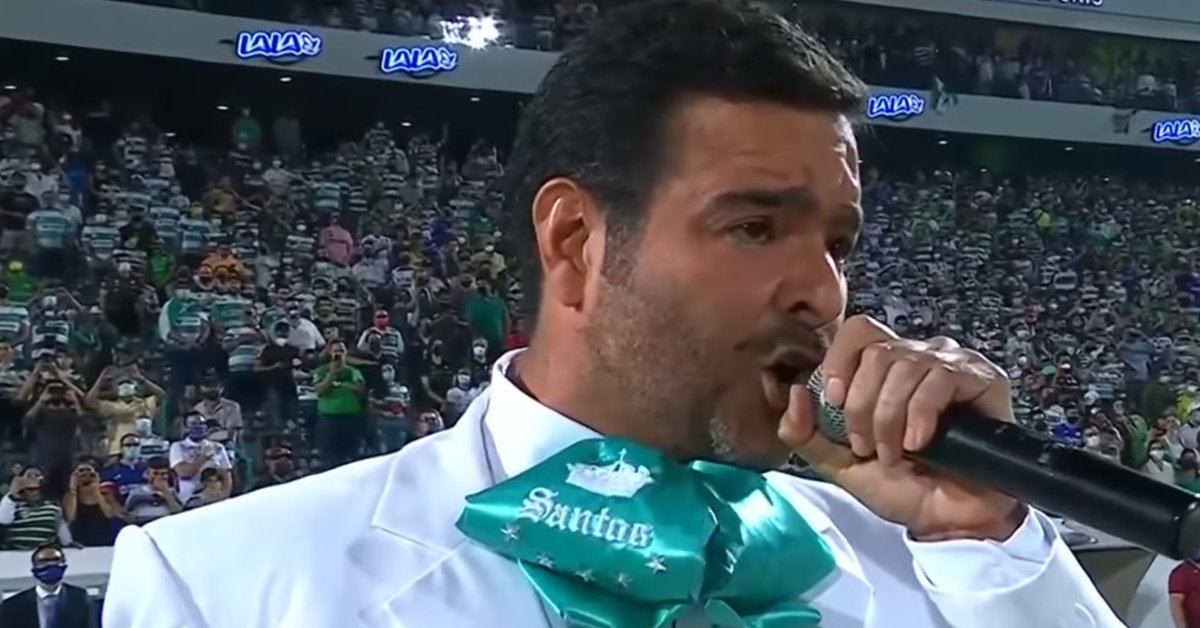 On the night of May 27, before the game of Santos and Cruz Azul from the final of the tournament Guard1anes 2021, during the civic ceremony in which the National Anthem was sung in front of the Flag of Mexico, the singer Pablo Montero made a mistake in the lyrics of the homeland and could be fined.

The singer completely changed the last words of one of the stanzas of the Hymn, singing “Ciña oh Patria! you feel olive, of peace the divine archangel, that on the finger your eternal destiny, summons us to deal with courage“, Instead of” Ciña oh Patria! your olive temples, the divine archangel of peace, that in heaven your eternal destiny, by the finger of God was written”.

Previously, after the time change that Angela Aguilar made to the Hymn when he sang it before the fight of the “Canelo” Álvarez vs. Joe Saunders three weeks ago, SEGOB made public that Pepe Aguilar’s daughter would not be fined as established in the article 38 and 39 of the Law on the National Shield, Flag and Anthem, because “The interpretation had no alteration in the lyrics”, was read in the tweet published by the secretariat.

Pablo Montero could even go to jail for changing the lyrics of the Anthem (Photo: Screenshot Fox Sports)

It was also indicated that because the execution was a cappella, the mistakes that the 17-year-old singer had made were understood, as she did not have any sound support.

While article 38 establishes that “the singing, execution, reproduction and circulation of the National Anthem, they will stick to the letter and music of the version established in the present Law. The interpretation of the Hymn will always be done in a respectful way and in an environment that allow due solemnity to be observed”.

Because the Montero did modify the lyrics at the Corona Stadium according to Federal penal code, set the articles 191 and 192 that the singer could be applied between six months to four years in prison or a fine of up to 3,000 pesos, as ruled by a judge.

During the ceremony, Pablo Montero did not react in any way (Photo: Screenshot Fox Sports)

The Ministry of the Interior So far it has not issued any statement about the error of the singer or about any possible fine.

On the other hand, the native of Torreón has made comments about his interpretation of the national flag, but he did hint that he was aware of social networks, where memes immediately came out and accusations against him.

Through their stories On Instagram, Montero shared that he was watching his presentation from a television and wrote “with all my heart”, but without giving any statement.

Pablo Montero has not given any statement about his mistake (Photo: Instagram @pablomoficial)

In addition to the criticism he received from Internet users, in the program Come the joy, the presenters of the morning assured that the singer should be fined for not having performed the Hymn with respect during its presentation and for not having prepared enough.

“It is truly shameful for Pablo Montero who was interpreting the National Anthem, which is an honor for any Mexican, he did not study, he did not rehearse, he did not prepare, that deserves a fine“, He said Flor Rubio.

“They can’t beat his nerves, it’s Pablo Montero, this man has sung everywhere, it has to be legislated in another way”, Seconded Ricardo Casares.