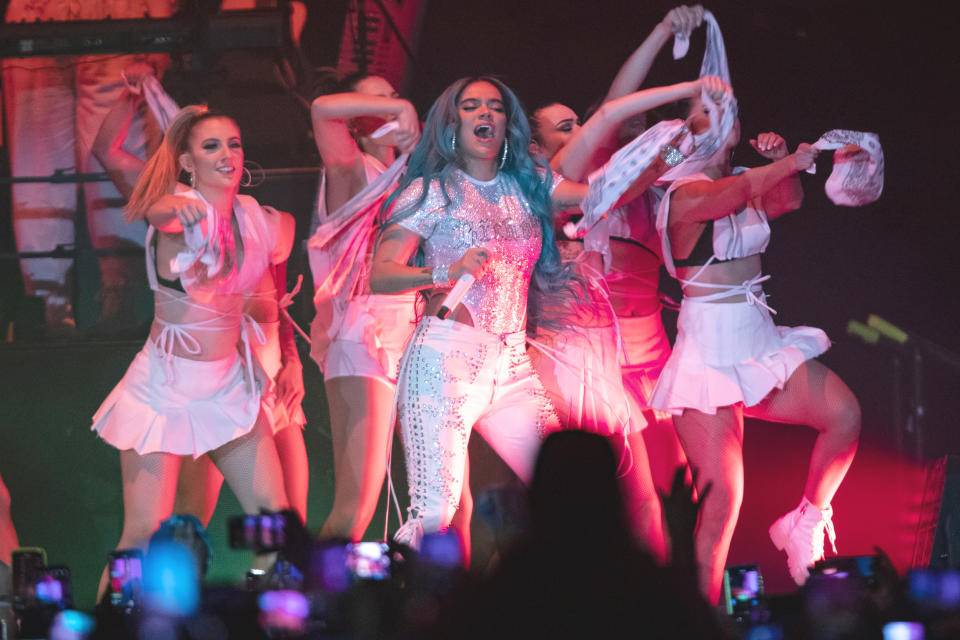 The meeting between Karol G and Anahí represented the union of two worlds. Or the best of both worlds, to be more precise. The Colombian singer appeared before 40,000 people at the Mexico City Arena and gave her fans an impressive surprise. In one of the most emotional moments remembered in recent times, Anahí reappeared on stage after eleven years of absence.

It was Karol G herself who was in charge of presenting her special guest. She had no qualms about mentioning how much she admires her and highlighted all the influence that the Mexican had on her, especially when she was a child. “Yes I’m still crying… although it was a moment of everyone and for everyone, that moment was mine too. It was incredible to see how despite the years of absence you still shine so brightly, 11 years off the stage, 11 years of invitations that you rejected because you had other ideals and you accepted mine, MINE! You accepted me and I felt so great and so special”

One of the most outstanding aspects of this particular collaboration was that genuine admiration that the Colombian showed for Anahí at all times. Precisely the fans made mention on several occasions of the humility of Karol G. Although Anahí had not sung for an audience for more than a decade, the joint performance of Save me he stole the hearts of the people of the capital.

The song had a special symbolism, as it represented the crossing of generations: two singers who marked an era in their respective golden years. Like Karol G, many of her fans grew up with RBD as a musical reference and, over time, found new tastes in the urban genre. On the other hand, it is also true that the songs of RBD, which at the time were criticized and received the label of fleeting success, have remained in force thanks to the hint of nostalgia that their listeners have attributed to the band formed in 2004. Everything It has changed quite a bit since then.

There is no doubt that Youtube completely revolutionized the music industry. That’s why today it seems normal to us to see a meeting between fan and idol. While Anahí was already a consolidated artist, with fame throughout Latin America, first, and then throughout the world, Karol G had just begun to enter the world of music, without any guarantee that her abilities would be enough to occupy a place of privilege in the industry, because the only certainty until that moment was that, to succeed, the media and promotional impulse of the record companies and radio stations was needed.

As of the last decade, with each album or single, Karol G has positioned herself as one of the main artists of the urban genre. The passage of time has led her to collaborate with Daddy Yankee, Bad Bunny, Ozuna and many more. Her relationship with fellow singer Anuel was one of the most recognized in the field, but, once it ended last year, Karol’s success has been more convincing than that of her ex-boyfriend, which confirms that she has always had her own brilliance.

Consequently, today it can be said that Karol G is the most influential reggaeton singer and enjoys worldwide fame. Of course, she also highlights the aspect of her making it in an industry dominated by men. She has been in charge of breaking paradigms in this aspect and, as she demonstrated in her presentations in Mexico, is not closed to making all kinds of collaborations because it also sang Are of Cafe Tacuba.

Anahí’s irruption in the musical world found a key point in 2004, with her participation in the teen telenovela Rebelde. She decided by her will to actively withdraw from music, although her songs with RBD continue to sound at the rate of millions of reproductions. Her stellar return with Karol G meant the unique fusion of two worlds that have made entire generations vibrate.

No one can take away his triumph at Coachella.

Anahí reveals the great professional advice that Juan Gabriel gave her before he died
Serrat does not rule out new concerts with Sabina, Miguel Ríos and Ana and Víctor
VIDEO: Eduin Caz from Grupo Firme ended his concert in Las Vegas very upset