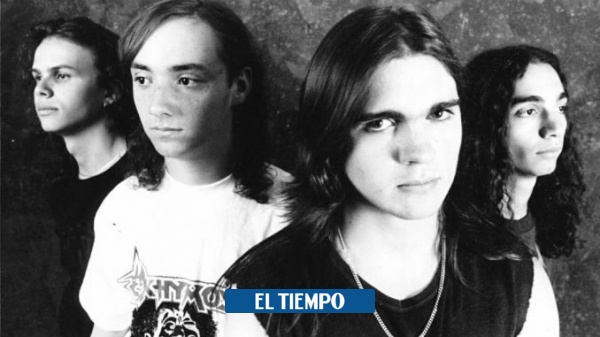 Juanes He was 15 when, in 1987, he met the bassist Andres Garcia, in an establishment where they met in search of someone who could repair their guitars. They saw that there was musical chemistry, that they could play together, put together a band and they did.

They enrolled in the trash metal -then they would go to rock in Spanish and many years later to flirt with pop.

His first single before the public was From above it is different.

From the time of Juanes -when he was known as Juan Esteban Aristizábal- in the band, the group’s first national success was Only, a song from ’95. From there came the hits, the turns towards more commercial sounds in albums like Ekhymosis, in 97, from which the success came The earth, more pop with a marked influence on local music.

The group did not end its history with the departure of Juanes, seeking to build a solo career. Leadered by Andres Garcia, the band continued, despite the fact that at times its members followed personal projects. He had years of rest and a few returns. The most recent of these returns to the music scene was in early 2021, after four years off, to present not just a new song: Condemned, in addition to a new training.

When talking about this new song, García affirmed that its theme had to do with the double standards of humanity. And in interviews he reported that persistence of Ekhymosis It was because the rebellion was still the same. “It has not changed,” he said in interviews, “because one as a musician is sometimes eternally dissatisfied, which pushes one to the limits.”

Thus, García continues to lead the Ekhymosis. The band that, without Juanes, returned to its origins in the trash and in the heaviest rock. He continued to fuel the cult band halo with his productions. Now it has Dani Zapata as a singer.

The musicians that make it up have been rotating over the years. Even one of them, Jose Uribe who was part of the band in 94 – already retired from the group and dedicated to teaching music in Spain – died in 2015.

When Juanes interpreted My land (and he also played guitar and piano), the Ekhymosis line-up included José David Lopera on drums and percussion, Andrés García on bass and Fernando Tobón, on second guitar and backing vocals.

Currently, the band is made up of García, on bass; Zapata, as lead vocals, Felipe Manrique (lead guitar), James Agudelo (rhythm guitar) and Mauricio Estrada (Drums).