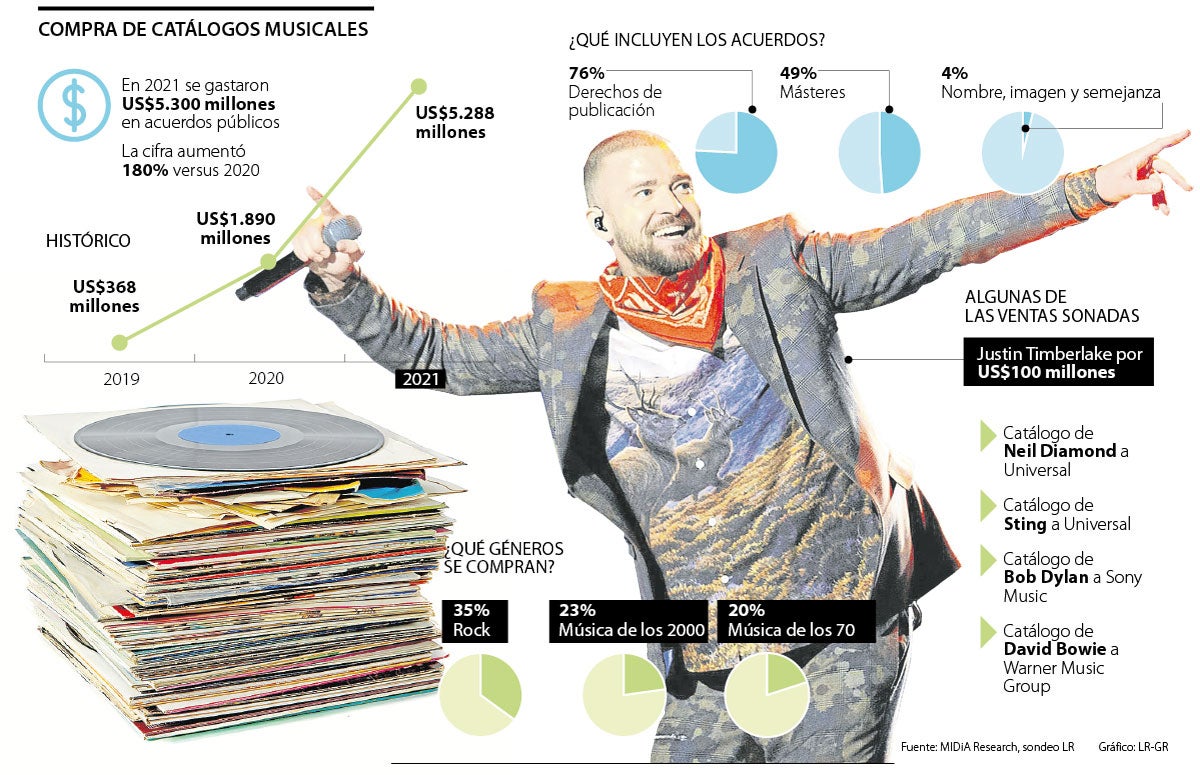 The music industry is constantly growing and reinventing itself, so it would not be an exaggeration to say that every day – at least – one new song enters the global playlists.

To get a local idea, in Colombia, during the first quarter of 2021 alone, some 4,567 musical works were registered with the National Copyright Department, 20% of the total 22,615 registered literary and artistic works.

But in this creative sea, some songs are always more successful and more attractive, both in sound and economic terms, and those that promise better profitability become juicy prey that drives record companies to buy catalogues.

Catalina Solórzano, managing partner of Crea Abogados, explains that once the artist sells his musical catalog there is a transfer of rights,” which can be done both for a fixed amount, in which he would no longer receive royalties or participation for exploitation of the catalog or for a variable figure in which he would receive participation”.

Among the notorious cases is the sale of Justin Timberlake’s catalog for US$100 million to Hipgnosis Songs Capital or that of classics like David Bowie to Warner Music, Bob Dylan to Sony Music or Neil Diamond to Universal.

But on the artist’s side, what benefits are there in selling their songs? Richard Conlon, a partner at Catch Point explains that the funds allow him a quick capitalization that can be used to invest in other projects or to continue promoting his musical career.

“A catalog sale allows you to receive a payment of approximately 10 years of royalties in advance and this allows you to generate significant liquidity for the artist. Normally when a music catalog is acquired, the buyer, whether it is a record label or a fund, projects the natural growth that this catalog may have”, says Conlon.

MIDia Research explains that in 2021 US$5.3 billion were spent on public agreements for the purchase of catalogs, the figure would have increased 180% versus 2020 and more than 1,300% compared to 2019.

For his part, José María Bernal, partner of the Mantyx label, maintains that behind the purchase of a catalog there is always a “mathematical equation” in which the numbers of the artist and their musical products must be evaluated.

“There are many evaluations that are made in the process and what weighs the most is the financial issue. When an artist is offered the purchase of his catalog it is because something is happening with his numbers. With this, the importance of the artist is contrasted, the projection of him, the moment of him, ”says the producer.

The trend for 2021 would put rock as the genre most desired by record companies for the purchase of catalogues, with 35% of sales. The figure is supported by the case of Sting, known for his glory days as a singer and bassist for The Police; 23% music from the 2000s; 20% music from the 70s and the remaining 22% various artists.

In the case of Colombia, as a multicultural and musically rich country, Conlon points out that the most important thing for its artists (if they want to enter the catalog boom) is to strengthen knowledge of copyright registration and royalty collection to avoid obstacles. legal in the process.

What are the reasons behind the boom in music catalog sales?