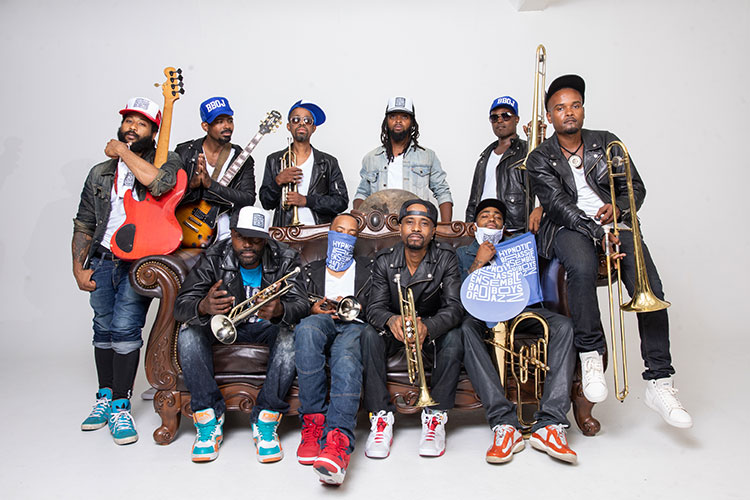 Hypnotic Brass Ensemble It is one of the most iconic jazz bands on the American and world scene. With more than twenty years behind him, it is inevitable to look back at his thirteen albums and some of his collaborations with artists of the stature of Prince Y Gorillaz. And all this being a group formed by brothers around the figure of their father, Phil Cohran –Who also served as musical teacher and mentor–, from whom they obtained all the support to form a band that has performed on five continents by the hand of the greatest.

An impressive resume that has made them a respected band from all musical genres. At MondoSonoro we have been able to talk with them about their career, but also about the situation of the jazz scene in the United States and how they are experiencing the latest events on the other side of the pond. Last year they published their latest work to date, “Bad Boys Of Jazz” (Pheelco Records, 20), and they just released a single, “Soon It Will Be Fire,” with the guest vocals of Moses Sumney.

More than twenty years on the stages of half the world, more than a dozen albums. How do you do it to maintain the illusion? Have you never considered leaving everything?
Well attitude is one of the hallmarks of the Hypnotic Brass Ensemble. One of the things that differentiates us the most from other bands is having a very hip-hop staging. We have a collective personality that is born from our music. But, answering your question, we have thought about it. [risas]. We have thought and talked for years about leaving the stage, touring the world is expensive and very exhausting, but we have never done it. It is our legacy and what our children will inherit. That is what keeps us going.

“Bad Boys Of Jazz” as an album title sounds great. But it doesn’t seem very difficult to be the bad boy in a genre like jazz, does it? Are there more bad guys?
I find it funny that you tell me that because jazz began as a form of artistic expression of those bad boys, those boys with problems who did not conform and who struggled to get out of the box. But now jazz is just conformism, a formula and linear thinking. So no, it’s not hard to be a bad boy in jazz these days, it’s very easy to be because they’ve fired the real bad guys from the industry. Before it was common for a jazz group to tell you that it was difficult to work with them, that they only wanted to play their music because they were aware of what they were worth, but that has nothing to do with jazz today. It is now taught in universities and many of the favorite jazz artists come from there. So HBE is known as the bad guys of jazz because we can’t help but embody those traits today. There are also a lot of bad boys in all musical genres and we work with them on that basis. If you look at the list of our collaborations, Prince was our top and we were able to work with him on the condition of being who we were.

“Before it was common for a jazz group to tell you that it was difficult to work with them, that they only wanted to play their music because they were aware of their value, but that has nothing to do with jazz today. Now it is taught in universities and many of the favorite jazz artists come from there “

The figure of your father, Phil, is very important to understand the history of Hypnotic Brass Ensemble. How did his figure influence you to form the group?
Our father’s philosophy of life is the one we have inherited and the one that has led us to what is now the band. Values ​​such as being in control of our destiny, both social and financial, of being a family and a community and overcoming obstacles together. We learned all this from a young age and it helped us to survive on the streets of Chicago first and to form a band later. The act of writing and performing our own music, or focusing our concerts on the most energetic melodies… We learned all these advances and adjustments from our legendary father and teacher Phil Cohran. So yeah, he influenced us a lot in what the band is today, beyond being our first music teacher. You could say that the Hypnotic Brass Ensemble is version 2.0 of the Phil Cohran’s Artistic Heritage Ensemble, the young version.

Despite being defined as a jazz band. What other genres influence your music?
That is a very important aspect of the Hypnotic Brass Ensemble. Our philosophy is that all the creativity of soul is jazz, so it is easy for us to look towards hip hop (our greatest musical influence), but also reggae and rock and roll. We grew up learning with classical music (Bach and Beethoven) and also great jazz bands (Duke ellington, Count basie), but when we could we would listen to soul and R&B (Isley Bros, Stevie Wonder, Michael Jackson, Earth Wind And Fire) and later we continued rapping with the cassettes of others like NWA and A Tribe Called Quest. Also as children we had a time when we listened to rock from the eighties and early nineties and Hypnotic ended up including all those influences in our performances. House music too, in a way, was another influence because it was what it sounded like at parties in Chicago. The DJ did not play the music from the radio, but he did it with his own mixes for people to dance, and that is why we include him in our shows whenever we can. African music is another influence that many fans may not have appreciated, ranging from the earliest African percussions to modern performances through the work of Fela kuti Y Tony allen.

“There are artists and movements that are now presented as the origin of this culture to assert some kind of authenticity, but the artists who really continue that movement do so within the underground or at a local level”

Somehow, you too come from that hip hop culture of the eighties that boiled in the big cities in the United States. What remains of that culture, of that boom that revolutionized music?
What remains of that era are a few hip hop MCs and house DJs who, along with veteran activists, maintain a close-knit community to support the movement. However, it is difficult to find them from the outside because they have been invaded by the most mainstream pop and have been redefined by major labels. So, well, there are artists and movements that now present themselves as the origin of this culture to assert some kind of authenticity, but the artists who really continue that movement do so within the underground or on a local level.

Besides jazz, what other genres do you listen to? Is there a group that you listen to in particular?
Each of us has our own musical tastes ranging from modern artists such as J. Cole Y Tupac shakur even more classic ones like Sam Cooke or Bobby Womack. Lately I’ve been listening to Lee Fields & The Expressions (one of the best soul records of the 2000s) and Nas’s latest album. The Californian Aankha Neal has something that makes her original. Skyzoo is a JayZ-like MC from Brooklyn that we also really like. Masta Ace’s latest work is amazing and Anderson .Paak has been releasing some really cool music. And I can’t forget Kamasi Washington. Everything it takes out we put it in a loop.

There is a phrase in Spanish that says “tell me who you’re with and I’ll tell you who you are.” You really have worked with the best of each genre: Snoop dog, Prince or Gorillaz. What is it like to work with people of this stature and so different from each other?
It’s very rewarding for us to work with so many music icons. I mean, we went to high school listening to Snoop Dogg and now we have songs with him is surreal. We loved the Wu-Tang Clan and having done a couple of songs with them and opening their London show was a dream come true. We have worked hard to earn our place and that legends like that ask us to work with them lets us know that we will be doing something right, that all the hard times have been worth it and that there is nowhere our music cannot take us. We listen to the radio, watch movies, and being able to recognize people you’ve worked with is very rewarding.

In 2018 you visited Spain on a tour that took you through seven cities. How was the reception?
We have performed in Spain since 2009 and it has always been like an explosion because, really, jazz is not a very popular genre among young audiences, but we as a band can say that we have filled the venues where we have played. In fact, the Spanish public has a reputation for being tough among musicians and that if you are bad, they will let you know. Furthermore, in Spain there is a kind of rebellion against the establishment that fits very well with the philosophy of the Hypnotic Brass Ensemble in the sense that we also make rebellious music. Our first video clip, “War”, was shot in Barcelona and, even to this day, it still works very well there.

You have given massive concerts and yet now it is impossible to hold events of this kind. How are you living it?
When the pandemic hit, our band was in a transition phase where we slowed down and focused on our publishing house while restructuring our record label. So we had been on a concert break for six months when this year’s extra cancellations were added. At first it was devastating, our industry has been one of the most damaged and, at the same time, one of the most ignored by the government and the general public. At the moment we have released our new album “Bad Boys Of Jazz” and it seems that things are moving in the right direction, but we miss the love of the people who enjoyed our music, the same way that a flower misses the rain.