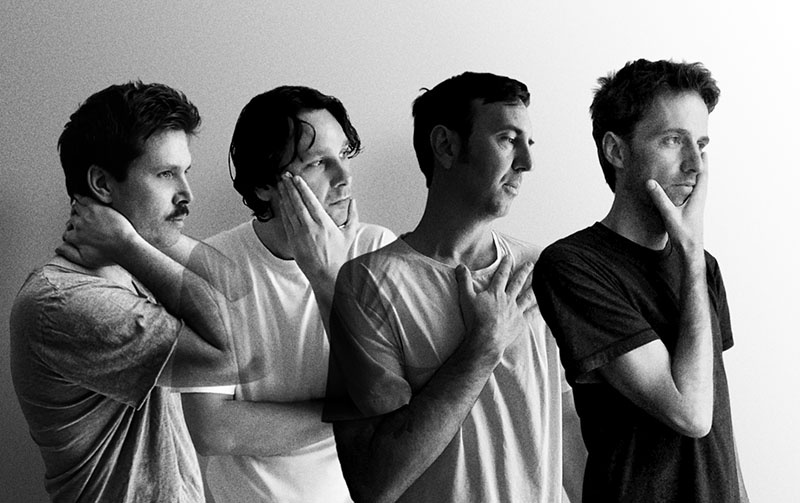 We interview Cut Copy, the Australian indie dance band that will soon perform in Barcelona, ​​Valencia and Madrid

While for many bands the hiatus due to the pandemic was an ideal moment to create, the Australians Cut Copy took it as a time of rest, retrospective and reflection. Just before confinement they finished their latest album “Freeze, Melt”, with which they logically couldn’t tour due to the situation.

Now the band is in full tour of California, Australia and Europe (Barcelona Nov 1, Valencia Nov 2 and Madrid Nov 3) and promoting the release of Collected Works 2001-2011, a compilation pack in which Dan Whitford, Ben Browning, Mitchell Scott and Tim Hoey review their history as a band to gain momentum and continue offering the best indie dance on the international electronic scene. 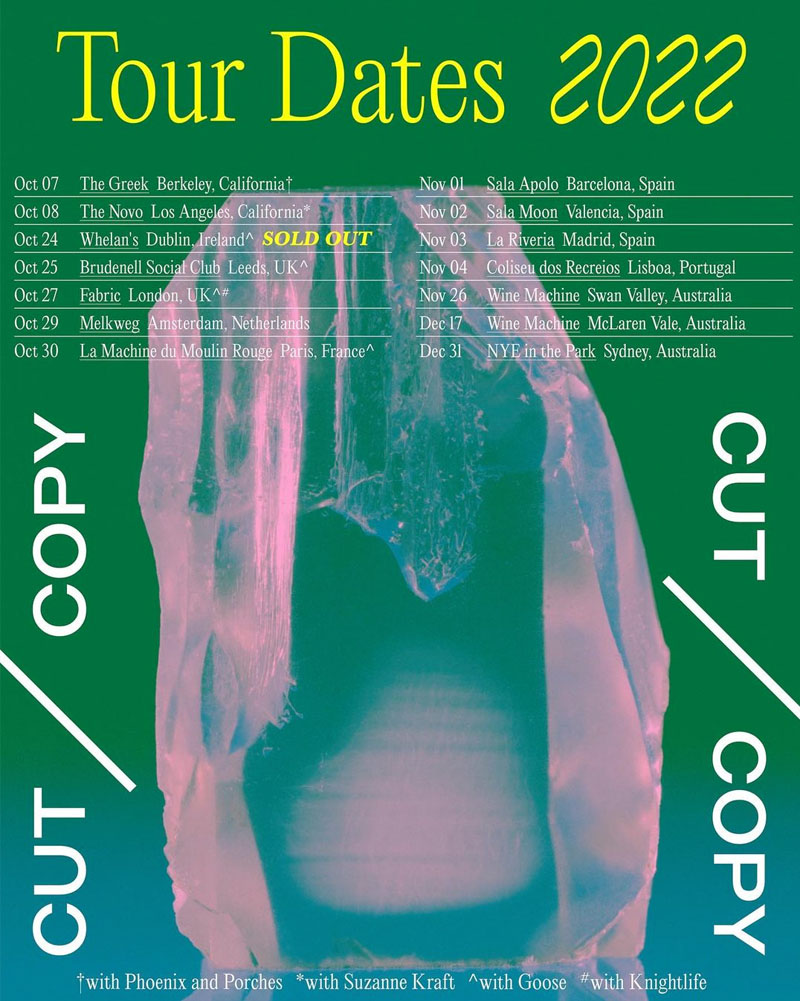 Where is Cut Copy currently as a band? Well, we’re still a band, so that’s good news. We were able to go on our first tour in April. It was the first time in two years since we saw each other. We feel very blessed to be back in action. The truth is that there was not a single moment in which we thought that we would not do it again.

How did you do to continue rehearsing and composing in the situation of restriction and isolation? To be honest, we didn’t. We had just finished the record (Freeze, Melt) and were about to release it and go on tour. The world was going through a lot of turmoil and I think it was quite difficult for all of us to concentrate on the music.

Do you all live in Australia now? What is Cut Copy’s habitual residence? Dan and Mitchell live in Melbourne. I am in New York and Ben is in San Francisco. I think this was also a contributing factor to us not working on our music for the first two years of the pandemic. Sharing music through a computer screen miles away didn’t seem inspiring at all. Even so, we continue to maintain a lot of contact.

You are related to musical genres such as Synthpop, dance, electropop or indie electronics, but I would like you to give me a definition of Cut Copy’s musical style. Our music is “something for everyone”. I think it probably reflects our musical interests. We all listen to a lot of different genres and I think they find their way into our sound. For every album, we always try to broaden our horizons in terms of style or the types of sounds we want to incorporate.

Due to the pandemic you were unable to tour your album “Freeze, Melt”, but now you are back two years later presenting the limited edition vinyl box set Collected Works 2001-2011 with which you recapitulate the first 10 years as a band, Will you also take the opportunity to tour “Freeze, melt”? We will focus 100% on the “Freeze, Melt” songs at the shows. Naturally, we’ll also play a lot of our old songs, including some songs that we’ve never played before. We are very excited to perform these new songs live as they are quite sonically different from the previous material. It’s much more sparse and perhaps more melancholy, so we were excited to find a way for the new material to sit alongside older, more upbeat songs. It required us to build more of an arc into the set instead of setting the energy to 10 from the start.

Although we have already been able to listen and analyze it during these two years, I would like you to give us a brief summary/explanation about this latest long work by Cut Copy. Ironically, this album has a lot to do with isolation. Dan was living in Copenhagen at the time, practically holed up indoors during a particularly brutal winter. I think he was looking out the window at nothing and this started to play a role in the kind of music he was writing. Previous Cut Copy records are pretty dense, so we had the idea to create a song or record with just a handful of different sounds or instruments. We all got together in Melbourne to finish Freeze, Melt in 2019 and put a lot of focus on stripping back more of the songs and incorporating a lot of improvisation, which was a new and exciting way of working for us. This record took on a different meaning to people when we released it during the pandemic. We were happy to hear that you helped people during this period of so much uncertainty. We are very excited about this album as it has felt like a big creative step forward for us.

And why have you decided now to release your compilation album “Collected Works 2001-2011”? We hate looking back at the past and want to continually move forward, but the pandemic gave us time to pause and reflect. Since we couldn’t be in the same room together working on new music, we thought it might be a good time to look back on what we had done in the first 10 years. Not only the music, but also visually. It was great going through all the old photo archives (we had forgotten so much!). Also, many of these records are long out of print. ‘I think Of Numbers’ had never been released on vinyl before. I don’t think people knew about the 1981 release (it was only available in a 7-inch limited edition and I think there was a video on YouTube). So it was great to put all of that together in this beautiful package. Dan did an amazing job with the art and packaging. It’s definitely something very special for the fans and I think there are plans to do more re-releases.

Do you prefer to perform at home or outside? We all live in different parts of the world, so we don’t get the chance to perform as much in our home country. We really want to go home.

On this tour you do various stops in Spain… How have your experiences been acting in our country? We love Spain. The first country I visited outside of Australia It was Spain, so it’s always special to come back. Although it took us a while to adjust to the schedules when it comes to playing in your part of the world. We just played in Mallorca and our set time was 3am we are used to playing around 9pm or maybe we are getting old lol.

Doing a little retrospective to your beginnings, in what do you see that Cut Copy’s sound has evolved the most? And what would you say is still completely intact? The early years of CC were purely sample based when it was just Dan. Then it became a hybrid of live and electronic music when we formed the band. The middle albums focused entirely on the “live band”, while the last two releases were more purely electronic. We are in constant change, but there is always something that unites the records. Maybe it’s Dan’s voice. I think there’s always an emotional attachment to our music that runs through every record.

Has it been difficult to adapt to new audiences and new musical trends over the years? We maintain that if you are honest with what you do and do not force things, you will always have your audience. We change styles/sounds from album to album, so I think we find that people will always react differently to each release. It’s good to challenge the public.

“If you are honest with what you do and don’t force things, you will always have your audience.“

How do you see that the consumption of music by the new generations has changed compared to those who listened to you at the beginning? Everything seems to revolve around streaming, right? Many people still buy our records (vinyl), which we believe is still the best way to consume our music. Music doesn’t seem to get a chance to breathe and it can be hard to get people to invest in albums when it’s more focused on playlists. The life cycle of an album is much shorter than it used to be and more geared towards releasing music more often, which we like. But there has to be quality control on what you’re doing.

Have you considered experimenting with other genres? We are open to any kind of experimentation if it makes sense and sounds interesting.

If you could talk to your “I” from when you started with the band, what advice would you give yourself? Be careful what you sign… maybe you’ll buy those vintage synths and drum machines from 20 years ago.

What do you want your fans to experience when they press play on a song of yours? Pure euphoria.

If you had to agree, what would you say is your favorite Cut Copy album and why? It’s always next.

And leaving aside the number of reproductions and the charts… What do you think has been the album or single that has been best received by the public? I think it’s pretty clear that ‘In Ghost Colours’ is that record, although ‘Zonoscope’ was probably more critically and commercially successful in a way. I hope that our themes have longevity and that they can still be played years later. That’s probably the most important thing.

Having been in the music industry for more than 20 years, does Cut Copy still have energy left to continue making music? Always stay inspired. If not, there’s not much point in doing it. We feel quite energized being in a room together again and playing songs for people.

What can you tell us about the next release of Cut Copy? We just started talking about this issue as we are physically together again. These tours will give us the opportunity to be in the same place and work together on our music. I don’t think we have decided exactly what to do and maybe we are open to all kinds of possibilities. Maybe we’ll make a record, maybe we’ll just release songs, maybe we’ll make another ambient album like “January Tape” or put out a more dance-oriented 12-inch or maybe all of the above? Either way we will try to release music next 2023 at some point.

Yotuel Romero talks by phone with J Balvin after controversy over Latin Grammy: Thank you brother
The Sacred Music Festival of Bogotá celebrates 10 years with love as its theme
Los Tigres del Norte: the song they are forbidden to play