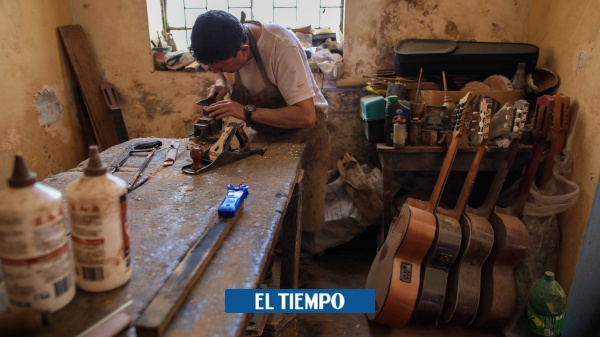 Milton Norato has been making string instruments for 45 years: guitars, trebles, requintos, bandolas. Locked up in his workshop in Chiquinquirá, he honors the heritage that has resonated with his family since the last century, since his grandfather, Tomás Norato, was one of the first luthiers in the country.

(See background: This is how the first virtual concert of the Philharmonic and EL TIEMPO was held, with Juanes, ‘Volverte a ver’)

Milton and his family echo the phrase that identifies the new project of the Bogotá Philharmonic Orchestra (OFB) and EL TIEMPO: We are music.

The sounds generated by Milton’s hands are as indigenous, they say as much about us, as those of the llaneras harps or the chonta marimbas of the Pacific. And these musical waves star from today, and until December 18, a series of six ‘disconnected’: musical presentations from various regions of Colombia, with the arrangements of that orchestra and the images collected by the Video Unit of EL TIEMPO.

“This project arose as a result of the beautiful experience we had with the concert ‘Volverte a ver’ with Juanes,” reveals David García, general director of the OFB. In the hardest moment of the quarantine, when there was enormous uncertainty and we were all locked up, we realized that we had stopped seeing each other and seeing the country, we stopped traveling. Perhaps the greatest inspiration for this project was to remember what Colombia is like, what the regions are like (…). It was an emotional need to bring that musical country “.

This Saturday, November 13, from 1 pm and after more than twelve months of work, the first ‘disconnected’ will be seen: the strength of the songs of the Rolling Ruanas, the arrangements and the elegance of the winds of the Philharmonic Band Juvenile and the warmth of the images that EL TIEMPO recorded on video traveling to Boyacá to tell their stories.

They are stories like that of Milton Norato and his trebles made with solid woods, taken from demolished old buildings. Or that of Rosa María Jerez, a potter from Ráquira, whose hands mold the virgins Otilias, who have crossed borders. Or that of Pedro Sierra, owner of the La Foguera restaurant in Sutamarchán, who prides himself on selling the best sausage in the country.

(See another background: Virtual concert of the Philharmonic and EL TIEMPO with Monsieur Periné)

Music from the region

We are music It will have six episodes that will be broadcast on the platforms of EL TIEMPO, its YouTube channel and its social networks, as well as those of the Philharmonic Orchestra of Bogotá.

It is intended as a gift at this final time of year and becomes a declaration of resilience, following the worst pandemic in more than a century. The first ‘disconnected’ will be seen today and with that same format the following deliveries will be made, with their respective guests:

“The project has had a very long duration –adds the director García–, because of how expensive it is: behind each one of these videos there is an enormous effort in the way of producing the music; Many times we had to record the instruments in isolation and each image that EL TIEMPO has put up required trips to different places. A song can pass in four minutes, but behind it there are months of work ”.

Indeed, the musical pieces that are presented today had the recording of a track with arrangements by the maestro Francisco Cristancho, who belongs to a family with a long artistic tradition. Despite sanitary restrictions, a kind of jazz big band was arranged, with 15 wind instrument players, who joined the four members of the Rolling Ruanas at the Jorge Eliécer Gaitán Theater, plus the audiovisual production of Canal Capital.

“Wind instrumentalists were the most affected by the biosecurity measures we had in the pandemic. To record the sound, each one of them was placed in plexiglass capsules, which is a kind of acrylic that avoided any health risk due to the air expelled by the instruments ”, explains Antonio Suárez, OFB’s symphonic conductor.

On this sound base are the video stories recorded in Ráquira, Chiquinquirá, Sutamarchán and other municipalities of Boyacá, with the support of drones, cameras fitted in vehicles and the work of videographers César Melgarejo, Angélica Castellanos and Édgar Sebastián López, from EL WEATHER.

“You can’t tell in the video,” says López, “but there are several hours of distance between each of the destinations. We had to go all over the region, which is huge and visually very beautiful ”.

Another challenge was the assembly of the different instruments, particularly in recordings such as those of the Pacificar Power and Alejandro Palacios, which developed during the third peak of the coronavirus, with all the restrictions that isolation brought to the artists.

In this regard, Suárez recalls: “The musicians of the Philharmonic recorded at home and sent the tracks from their cell phone, with the same metric. A group of arrangers was preparing the works, according to the sensitivity of each rhythm and each region. For a second of music, we had to mix up to 200 channels, an immense recording process, which we had already experienced with the virtual concerts of Juanes and Monsieur Periné, last year ”.

The explanation of how Somos Música was made will be seen today, following the ‘disconnected’, with a virtual talk in which Jorge Mario Vinasco, a typist of the Rolling Ruanas; the video directors Angélica Castellanos and Édgar Sebastián López, and the general director of the OFB, David García.

“We are music It comes at a time of great hope, the country is reactivated and we want to transmit a message of great identity ”, concludes García.

We are Music, a journey of six scales in a philharmonic tone