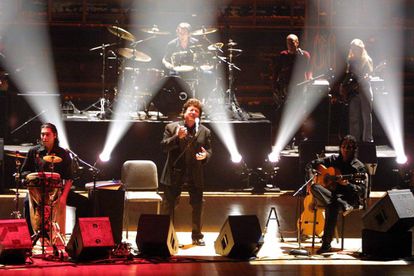 The rise of the Taliban to power in Afghanistan, the Russian invasion of Ukraine and the information management of the pandemic have been the waypoints that have marked the freedom of information agenda in recent months. Like every May 3, coinciding with World Press Freedom Day, Reporters Without Borders (RSF) submits its annual report. This year, in addition, the organization celebrates its 25th anniversary of activity in Spain, which it will celebrate with the benefit concert Voices against silence. The event, which will take place tomorrow, Tuesday, in the Galileo Galilei room, will feature performances by Lagartija Nick, Freedonia and Valeria Castro.

Ebbaba Hameida, a member of RSF’s board of directors, says that the party, initially planned for 2020, had to be canceled due to the pandemic until it could be held this year: “We have always done radio programs with an audience or some other activity, but, although there is still more to claim than to celebrate, as we were celebrating our 25th anniversary in Spain, we wanted to do something more festive to publicize our work”.

Between the musical vindication and its message, they have found the balance in the artists that make up the poster. “We had thought of Lizard Nick because they have the record of the crestfallen skies (2019) which we believe very much represents RSF’s mission. The lyrics of each of the songs has a message, it talks about a conflict, a situation, wars… So we felt very reflected with their lyrics”, details Hameida. They also found it “interesting” to have Freedonia, soul band that “it also represents this voice, since our cause speaks from many corners of the world and we defend journalists from all over the world”. Finally, the Canarian artist Valeria Castro has joined, according to the RSF spokesperson “a voice that she also claims, a feminist voice.” “We wanted all kinds of people and all ages to come,” she adds.

From the people from Granada Lagartija Nick, his bassist and voice Antonio Arias He emphasizes over the phone that “one of the great attractions of this job is to give voice to these causes, and serve as a loudspeaker”. The singer of the group, active since 1991, considers that his profession as musicians “has a projection that is as a social act.” “A lot of people approach us as artists as if we know top-down politicians, but this is bottom-up action,” he adds. His last album the skies crestfallen, is a symphonic poem by Antonio’s brother, Jesús Arias, who died in 2015, who was one of the pioneers of the Granada music scene with his band TNT “In 2020 we had to postpone the concert, but our position has always been the same: the war is always there, it’s like a pain, or like a ghost member of society”, expresses the bassist.

Other stars of the night will be the 10 members of the Madrid soul band Freedonia. His guitarist Ángel Pastor says that he offered them the possibility of collaborating in this act and they were clear from the first moment: “Like us, among other topics that we touch on in our songs, we talk about freedom of expression, or other times the pressure that it is done from certain sectors of politics towards what is communicated and how it is communicated, it seemed quite interesting to us to collaborate in this act and in what is claimed, among other things because the lack of that freedom of expression, the power to transmit things from a point of view with freedom, without any type of pressure, of concealment, which we think is one of the evils that can stalk society today”.

The health of the press

The Russian offensive in Ukraine it is one of the conflicts that most worries RSF at the moment. From the organization, they have focused on supporting journalists who cover the war since it broke out more than 60 days ago. “It is a conflict that has claimed the lives of a dozen journalists who have been killed in this war. And we are also very concerned about everything that freedom of the press entails, which has been even more stifled in Russia, we see how the regime of Vladimir Putin with this war he is persecuting the independent media, for example”, says Hameida. One of the main consequences is suffered by the independent Russian media, which are branded as foreign spies: “They cannot finance themselves with advertising and only have subscribers, who now with the sanctions cannot contribute to these media.” The member herself hopes that, after this war, the media will see “the importance of investing money for security and not falling for propaganda.”

The press freedom report will also delve into Afghanistan, since since the Taliban came to power Last year, one of the first measures was to control the media, either through disqualification or domination: “Of course we are also very concerned about the situation in Latin America. The persecutions, murders, arbitrary detentions of journalists there continue to be a tragedy. In Mexico, five or six comrades have been murdered for exercising journalism and the map of the world that we are going to draw on May 3 is unfortunate for the press.” A day that will serve to vindicate the value of the press, denounces Hameida, “until we breathe air of absolute freedom.”

‘Voices against silence’, a concert to claim freedom of the press