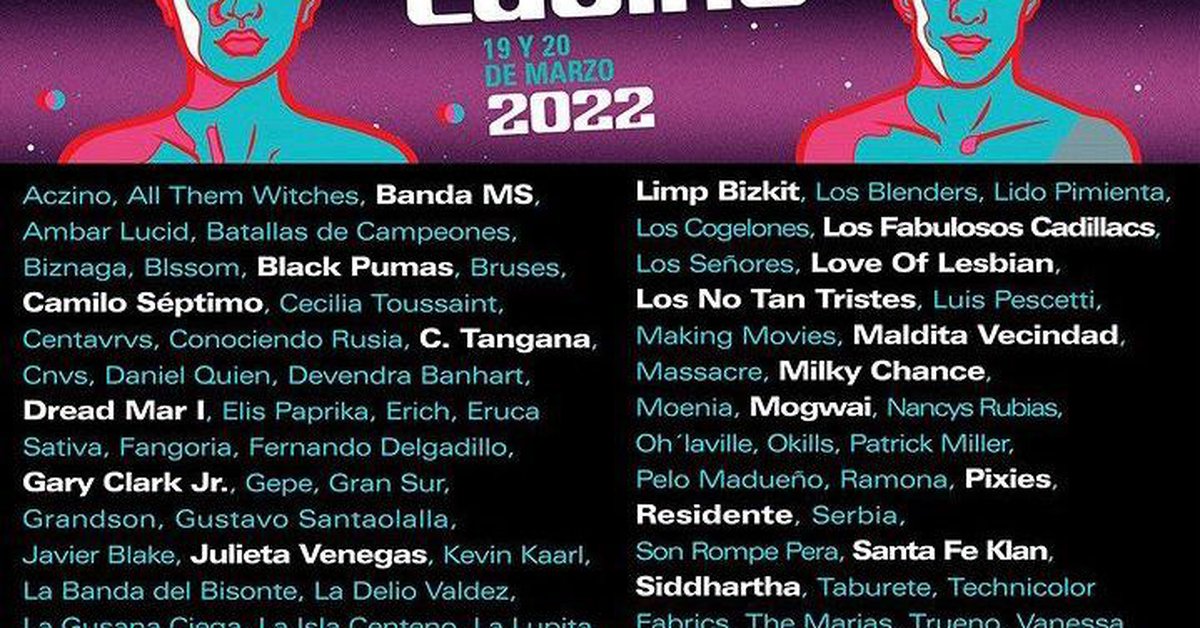 The official poster of the Live Latino 2022 It was revealed this morning. Artists such as La Banda Ms, Siddharta, Residente, Julieta Venegas, Limp Bizkit, Los Fabulosos Cadillacs, among others, will be in charge of lighting the stages of the Ibero-American Festival of Musical Culture.

For a few days, Vive Latino had shown clues about its poster, posting small psychedelic videos with music from different artists in the background.

The festival will take place on March 19 and 20 and the pre-sale of tickets will begin on October 13 and 14 and the subscription for the two days will cost $ 1900 pesos.

The Mexican festival began to raise expectations a few days ago by giving the first clues about the artists that would be part of its poster in its March 2022 edition, nicknamed “Revive.” The artists were presented individually in an auditory puzzle that wanted festival fans to decipher the artists who will be performing next year at the festival.

The first revelations pointed out that Camilo Séptimo, La Banda MS, Black Pumas, Pixies, Residente C. Tangana and Love of Lesbian would appear in the show, however the lovers and followers of the music festival did not lose hope of having their artists favorites headlining the festival.

The last edition of Vive Latino was held in March 2020, a few days before the quarantine for the Covid-19 pandemic became official. In 2021, the festival gave no indication of wanting to make a virtual edition, so the expectation for the Ibero-American Cultural Musical Festival of 2022 created a lot of expectations in the poster and the expected return of the artists to the stage.

The 21st edition of Vive Latino, in 2020, was the last music festival to be held in Mexico. In the midst of controversy, cancellations by artists and badas and misinformation from its attendees, the event started in March 2020 over 40,000 attendees to see bands like Zoé, The Cardigans and Guns N ‘Roses. Fortunately, no massive contagion of Covid-19 was recorded within the festival.

Musical diversity has always been something in which the festival stood out, it also managed to position Vive Latino as one of the most important music festivals in Latin America and one of the most anticipated by the Mexican public since it will be one of the first macro events to return in person.

La Banda Ms has been one of the most outstanding surprises on the bill, however, the festival was always characterized by the musical diversity within its stages. In 2020, Los Tucanes de Tijuana also surprised the public by performing on the main stage of the festival, however the attendees were in charge of giving them a warm welcome and danced with the group to the rhythm of La Chona.

Los Tucanes de Tijuana also surprised the public by appearing on the main stage of the festival, however the attendees were in charge of giving them a warm welcome and danced with the group to the rhythm of La Chona. PHOTO: DIEGO SIMÓN SÁNCHEZ /CUARTOSCURO.COM

This year, the festival decided to pay tribute to the Prince of Song, a few days before its anniversary, where artists such as Emmanuel del Real, Mon Laferte, Andrés Calamaro, Dr. Shenka from Panteón Rococó, Carla Morrison, Ely Guerra, Ximena Sariñana, Alemán, Pato Machete, among other artists. The event was broadcast for free on the festival’s official YouTube and Tik Tok channel and was the festival’s first interaction with the public since 2020.

On social media, festival fans commented that this year’s poster has been one of the best the festival has presented and they noted their excitement for the event.

The first artists confirmed for Vive Latino 2022
Vive latino: Los Ángeles Azules and other criticized bands that were a resounding success
Mexican festival Vive Latino announces its 2022 edition with a varied lineup