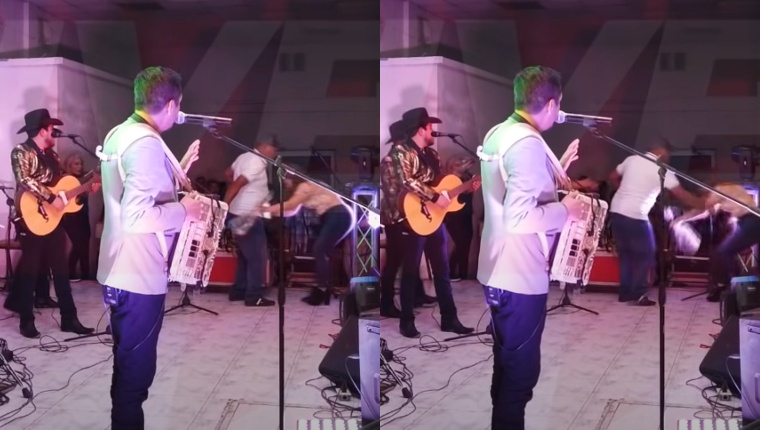 Mexico witnessed a violent event again this weekend after in the middle of a concert by Paco Barrón y sus Norteños Clan, a woman was stabbed in an alleged scene of jealousy.

The incident started when a woman climbed onto the stage where the Mexican regional music performer and his band were performing, and unexpectedly She was attacked by a man, who was allegedly her ex-partner.

According to local media reports, the brutal attack took place during the early hours of April 16 when Ana Patricia Pérez Cuellar, a 43-year-old woman, went on stage to receive a rose from the singer.

In that instant, her alleged ex-partnera 42-year-old man later identified as Heriberto, came out after the woman and he stabbed her repeatedly on stage before the eyes of all those present in the Lions Club, located in the State of Nuevo León.

Also read: Video: armed confrontation between hit men from the CJNG and the Gulf Cartel terrorize the population of Mexico

The assailant pulled out a knife and he managed to stab the woman several times in the abdomenwho in his eagerness to avoid the attack and due to his injuries he fell from the stage.

To the astonishment of all those present, the singer Paco Barrón asked for immediate attention for the woman and requested that the police be called to stop the man responsible for the brutal attack.

Read more: Profiles in dating apps and a digital footprint: The day Martina fell, “the black widow” who chose her victims to drug and rob them

Security personnel and several of the attendees at the concert subdued the aggressor so that he would not run away and later he was handed over to local authorities to stand trial for his crimes.

For your partthe injured woman was transferred to the general hospital of Montemorelos and after receiving medical attention his life it was reported that his life was not in danger.

It may interest you: The videos that show the devastating floods in South Africa that left more than 300 dead

However, the doctors assure that his wounds are very deep and It will take approximately 15 days to heal and begin your recovery process.

Video: the shocking moment in which a woman is stabbed on stage after receiving a rose from a singer