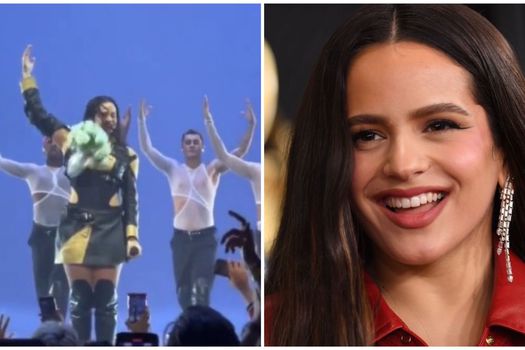 Rosalía was giving a concert in San Diego, United States, when she was hit in the face with a bouquet of flowers.

Spanish singer-songwriter Rosalía was in San Diego, United States this weekend as part of her “Motomami World Tour”; Performing Sunday night at Cal Coast Credit Union Amphitheater, the singer was hit in the face by a fan who threw a bouquet of flowers.

(Also read: The ‘Gorda’ Fabiola suffered a fall that was recorded on video)

Despite the fact that the Catalan is very surprised in the video, she takes this incident in the best way and makes a sign with her hands as if she were shooting an arrow at the person who threw the bouquet, and then continue with the concert.

Hours later, through the social network Twitter, Rosalía spoke about what happened at the concert: “Please, do not throw things on stage, and if you are so mommies that you throw them anyway, then throw them on the opposite side to where I am”.

(We recommend: Video: At Daddy Yankee’s concert the roof caught fire and they had to stop it)

Some fans responded to the trill asking for a little more care with the singer and outraged by what happened. “A motomami would never throw anything at another motomami”, “I respect the artist above all else” and “Throwing things on stage is very dangerous because she or the dancers can slip or hurt them. Many artists have already said no regardless of what happened here”, were some of the comments.

PLEASE DON’T THROW THINGS ONTO THE STAGE AND IF YOU ARE SO MOTOMAMIS THAT YOU THROW THEM THE SAME, THEN THROW THEM ON THE OPPOSITE SIDE TO THE ONE I AM ON🤍🙂🙂🙂
Thank you

Let us remember that Rosalía was passing through Colombia on August 31 with her “Motomami World Tour” at the Movistar Arena, where she received a bag of pandebonos, wore the ‘vueltiao’ hat, a poncho and mentioned Shakira as one of her great referents in music. In addition to visiting Monserrate and the Plaza de Bolívar.

What made Rosalía famous?

Rosalía, who just turned 30, has been in the music industry since she was 15 and performed on the Spanish talent show, “Tú si que vales” where she was not admitted.

Even so, the artist continued and achieved world stardom thanks to her album “El Mal Querer”, from which songs such as “Malamente”, “I think of you look” and “Bagdad” come off. With this album, she was also the winner of her first Grammy in 2020 for Best Latin Rock or Alternative Album.

Video: Rosalía is hit in the face with an object at a concert, this is how she reacted