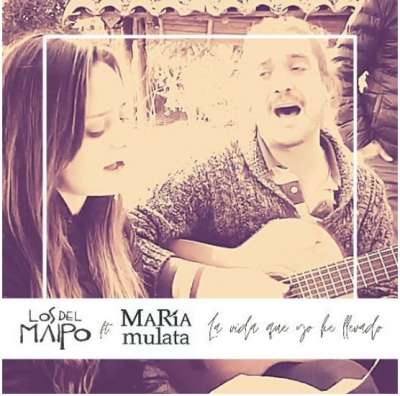 The Chilean band from New Root Music native of Cajon del Maipo premieres her most recent song, which has the special participation of the renowned Colombian singer, songwriter and researcher Maria Mulata.

“The life that I have led “ the new single is titled “Los del Maipo“, a vallenato which has been the second advance of his next studio album. The Caribbean sound and the fusion of this song I could not count on a more precise collaboration to interpret it than that of Maria Mulata, one of the most relevant continental figures of root music folkloric, with whom Los del Maipo They have a long friendship and have been working for years on some projects together.

“The life that I have led “ was composed by Alfonso Ureta, vocalist of the band, in whose lyrics there is a look of internal recognition on the part of the author. The single will be available on all digital platforms as of June 4, its release is accompanied by a video clip in a studio recorded remotely between Santiago and Bogotá, and is already rotating in different media outlets. Chile, Colombia Y Latin America.

Maria Mulata Y Los del Maipo they met in 2013 during the promotional tour of the first album “Son Pa’l Mundo”Of the latter by Colombia and, later, they worked together in the production of the tour that the Colombian did for Chile in 2018, sharing the stage in some of their presentations. Maria Mulata was the winner of the Viña del Mar Festival Folkloric Competition in 2007 and since then he has had a close relationship with our country. She has been nominated twice for the Grammy Latinos (2013 and 2018) and has traveled much of the continent and Europe with successful presentations.

Los del Maipo have stood out for their activism in environmental causes, they have been winners twice of the Margot Loyola Root Music Award (2018 and 2020), have been nominated for their albums for the Altazor 2014 and Pulsar 2017 awards, they have been presented live by Chile, Colombia and Argentina and they have made interesting musical collaborations among which stand out, in addition to the Maria Mulata, the with José Seves by Inti Illimani Histórico for the song “Shadow and silenceo ”(2016) and with Francisco “Pancho” Sazo from Congress Group for the song “The things that I lack”(2020). They are currently promoting this new single and preparing what will be their third studio album which will be titled “Estate”.