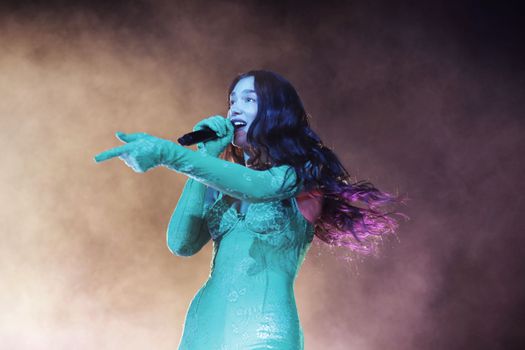 Dua Lipa performed this Sunday for the first time in Colombia as part of her “Future Nostalgia” world tour. EFE/Carlos Ortega

This past Sunday, September 18, Dua Lipa appeared for the first time in Colombian lands, because, with her “Future Nostalgia Tour”, she came to delight her followers with her hits: “Physical”, “New rules”, “Love again ”, “Cool”, “Pretty please” and “Levitating”.

The staging by the artist exceeded expectations, because, with her choreographies, the light shows and the four acts that she had prepared for the show, it managed to be one of the most outstanding concerts of this 2022.

In the same way, due to the logistics and the place where the interpreter appeared, many followers of the Londoner pointed out that: “from outside the Dua Lipa concert it looks better than inside.”

Videos and memes on social networks pointed out that there was a lack of organization on the part of the organizers of the concert and that, in addition, the establishment should no longer be considered as a stage for future artists.

On Tik Tok, users Sebastián Ramírez (@sebxxsdav) and Ka Lozano (@kalozanomalpik), uploaded videos where they were outside the Salitre Mágico park, on 63rd Street, and they can be seen on the screens, and even on top of the trees, Dua Lipa giving her show.

(We recommend: Dua Lipa: the expression and forcefulness of a modern pop diva)

Dua Lipa arrived in the city of Bogotá on September 17 and had the opportunity to attend the second date of the Coldplay concert at the El Campín Stadium, where she was seen sharing with Camila Cabello, opening act for this section of the group’s tour. .

“Future Nostalgia Tour” will be visiting more than 30 countries; It began on February 9 in Miami, United States, and will end on November 16 in Perth, Australia.