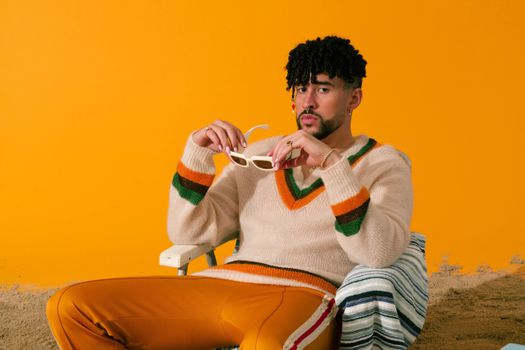 “You do know”: This is how Anahí reacted to the video of Bad Bunny singing “Sálvame” by RBD. EFE/Eric Rojas

International artists continue to show their love for classic television series and groups that marked more than a generation and that, to this day, continue to be a trend thanks to social networks and even concerts that pay tribute to Latin pop culture.

(You may be interested: David Warner, British actor of “Titanic” and “The Iron Cross” has died)

Now, it was the turn of the Puerto Rican artist, Bad Bunny, who through a TikTok video, showed his love for the Mexican band, performing one of RBD’s most recognized songs, “Sálvame”.

The video, which was published this Sunday, already has more than 35.2 million views and 7.7 million likes within the application and more than 90 thousand comments from fans of the singer, and also, of the main interpreter of this success of the 2000s, Anahí.

The comments you received for the video

After a couple of hours of publication of the video, the reactions were immediate and, in addition to their fans and, of course, the fans of Anahí and RBD, the same singer was the one who starred in another part of the viral video.

(You can also read: Jennifer Lopez turned 53 and says she feels half her current age)

Through a duet on TikTok, Anahí commented “You do know” and tagged the bad bunny while he performs the verses of one of the most famous songs of the Mexican band.

Other artists who have enjoyed the successes of RBD

In addition to Bad Bunny, who put “Today I want to drink” in his singing video, other artists have recently highlighted the talent of Anahí, who became known thanks to her leading role in the soap opera ‘Rebelde’ and in the music group RBD.

Karol G was the one who again brought to the stage, after several years without being on stage, the famous Anahí, who, during the concert of ‘la Bichota’ in Mexico, climbed up to sing this success in front of her fans.

Now, and thanks to Karol G and the video that Bad Bunny made public, many fans expect Anahí to be their next concert guest. Even the official account of MTV Latin America commented on the duet that the singer did and said: “Request for Anahí to come out at Benito’s concert.”