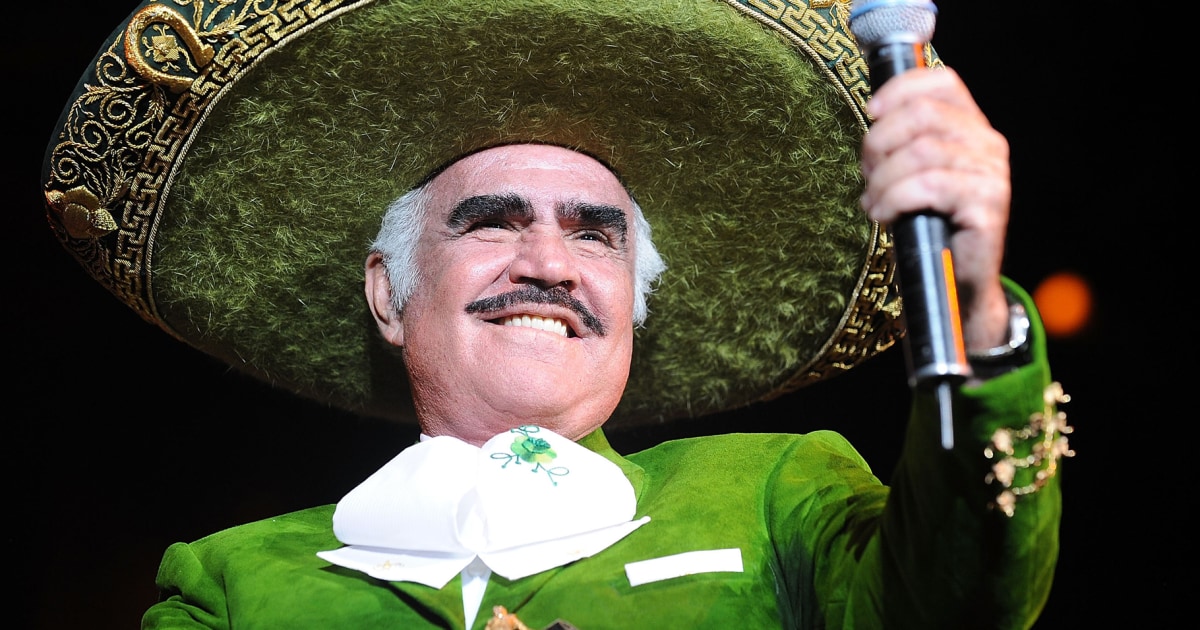 Vicente Fernández died. The idol of ranchera music died in a hospital in Guadalajara, in his native state of Jalisco. He was 81 years old.

“Rest in Peace Mr. Vicente Fernández. We regret to inform you of his death on Sunday, December 12 at 6:15 am ”, his family confirmed in a message on his Instagram account.

The famous Mexican singer had been admitted to the Country 2000 Hospital for more than four months, after suffering a fall on his ranch The 3 Foals on August 6, in which he injured his cervical vertebrae when he hit the bureau in his room.

They underwent surgery to treat the spinal cord trauma caused by the accident and He was admitted to the intensive care ward of the hospital until the beginning of October. Then, it came out presenting a slight improvement, but they had to re-enter him after suffering a relapse at the end of November for which she required respiratory support.

He is a famous singer-songwriter and performer of ranchera music you had already had several health problems before your accident. On July 7, he was hospitalized for a severe urinary infection. and in recent years he had suffered from low blood pressure.

He survived prostate cancer in 2002; ten years later they removed a tumor in his liver; a thrombosis in 2013 affected his voice; and in 2015 he underwent surgery to remove three abdominal hernias.

His son Vicente Fernández Jr. said on Friday that his father was “delicate and at a critical moment”, in an interview he offered to the media outside the hospital to deny rumors that he had already died, when there was speculation about his state of health .

The legend of Vicente Fernández

Vicente Fernández Gómez was born in Huentitán El Alto, Jalisco, in 1940, the son of the rancher Ramón Fernández Barba and of Paula Gomez, who dedicated himself to housework. In interviews he used to tell that the moment that defined his vocation happened at the age of 8 when he was given a guitar and, without receiving lessons, he quickly learned to play it.

Six years later, in 1954, he debuted in a competition amateur in Guadalajara where he won first place. From that moment he did not stop singing in restaurants, weddings and baptisms, while perfecting his art. He was also a bricklayer, painter, innkeeper and bartender to help his family living in poverty after a series of financial setbacks. Chente began his more formal artistic career in 1960, when he acted in ‘La calandria musical’, a very successful television program that was broadcast in Guadalajara. Shortly after he moved to Mexico City where he achieved consecration in the 1960s.

But not all was easy. At the beginning of 1963 his mother, Paula Gómez de Fernández, died of cancer, and that same year he married Maria del Refugio Cuquita Covers Villaseñor, her neighbor in Guadalajara. The couple had four children: Vicente, Gerardo, Alejandro Y Alejandra.

I have recorded over 300 songs that have yet to be released. My vice is singing “

“I never thought of failing, I always thought of reaching higher, the only thing that hurts me is that my mother died with the illusion of a home of her own and my father with the idea of ​​having a lot of livestock and I couldn’t give it to her. Now when I see this house and this ranch I can’t stand it, my eyes get wet, “he said in an interview with the magazine ‘Who’ in 2016.

Although Fernández began to have moderate success, because he played with the best-known mariachi groups in Mexico, such as the Mariachi Amanecer by Pepe Mendoza, and the Mariachi by José Luís AguilarHe continued to sing in restaurants and record labels would not hire him.

However, everything changed in April 1966, with the death of Javier Solis, another ranchero music star who orphaned all his fans. It was the right moment for the birth of another star, so that year Fernández signed his contract with CBS Mexico.

In the summer of 1966 he recorded his first hits as Your way and mine, Forgive me Y Neighborhood canteen. And in the following years he released a series of albums with major sales such as I am from below, Not in self defense Y King’s word.

On stage, after the climax of his long presentations, he liked to repeat: “As long as you don’t stop clapping, your Chente he does not stop singing ”.

In parallel, he began to cultivate a prolific acting career which started in 1972 with Charcoal tacos and that led him to participate in more than 30 films, among which stand out Your way and mine, Law of the hill Y The gambler, among many others.

Fernández was devoted to his childhood idols such as Pedro Infante Y Jorge Negrete, singers and actors who forged the stereotype of the gallants of ranchera music. So he fervently wanted to achieve a great success that would immortalize him internationally.

That moment came in 1976, when he recorded Return Return, of the composer Fernando Z. Maldonado, a song that became an anthem that broke all sales records and played on all radio stations in Latin America.

“I have always said that there are no great composers, but great songs,” said the interpreter in a interview from its official website. “And I have never said that I am a composer. It is a very difficult job, however, some ideas and inspirations have come to me and when that happens, I run to pick up a pen and write a few sentences, “he added.

He recorded more than 100 albums and 300 songs. Among them classics of Mexican popular music such as Here between us, Divine women Y By your damn love.

He also won two Grammy Awards, in 2010 and 2015; four Latin Grammys after 2002 and six Billboard Awards, in addition to earning a star with his name on the Hollywood Walk of Fame. The specialized critic came to compare it with Frank Sinatra for his exceptional vocal gifts.

“I have more than 100 albums on the market and I have recorded more than 300 songs that have not yet been released. My vice is singing, “he acknowledged in a statement collected on his official website, where it is ensured that the star recorded at least 20 albums with unreleased material that will be released in the future.

Despite having achieved stardom, his career was not without controversy. In 2013 he was investigated in Spain for accusations of money laundering from Colombian drug trafficking, although his involvement was never proven.

He also made homophobic comments, such as that he would refuse to receive a liver transplant if the donor was a homosexual person, and he had a complicated relationship with alcohol. In 2016, at his farewell concert in Mexico, he even told more than 100,000 people that, if he were to Donald Trump, he would spit in his face “and I’m going to tell him the mother.”

In january of this year a 2017 video was released in which he appeared touching the breast of a fanatic with whom he was taking a photo, which unleashed a wave of indignation that led him to apologize, while crying in an interview.

His musical and artistic legacy make him the last exponent of a line of singers who forged the collective memory of Mexico and much of Latin America with songs of heartbreak, betrayals and raptures that are chanted by millions of people.

“I would like to die where God wants to pick me up, na ‘more than give me a chance to repent,” he said in one of his last interviews.

Vicente Fernández, the idol of Mexican rancheras, dies at 81