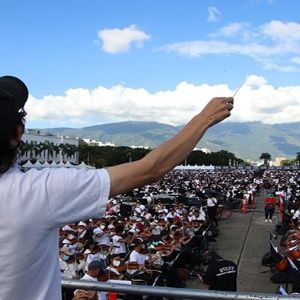 The National System of Youth and Children’s Orchestras and Choirs of Venezuela held a concert this Saturday in which it seeks a Guinness record as the largest orchestra in the world gathered in a presentation with 12,000 musicians.

So far, this record is held by an orchestra from the Gazprom Oil Company Social Initiatives Fund, which with 8,097 musicians established the achievement in Saint Petersburg, Russia.

The orchestra interprets the Slavic March, by Piotr Ilich Tchaikovsky, among other musical pieces from the South American nation, under strict compliance with biosafety measures in the honor yard of the Military Academy in Caracas (capital).

According to the Ministry for Communication and Information of Venezuela, the young people, from the age of 12, had the direction of Naileth Castro, Urielis Arroyo, María Gabriela Hernández, Andrés David Ascanio, Enluis Montes and Diego Luzardo.

For his part, the director of the System of Children and Youth Orchestras of Venezuela, Eduardo Méndez, explained at the time that the challenge consisted in “executing a symphonic work from the universal repertoire that lasts more than five minutes.”

The event was broadcast through social networks, as well as national media and the information multiplatform teleSUR, after the rehearsals carried out on Friday.

The activity featured 300 independent supervisors accredited by Guinness World Records, as well as two specialist witnesses from the music industry.