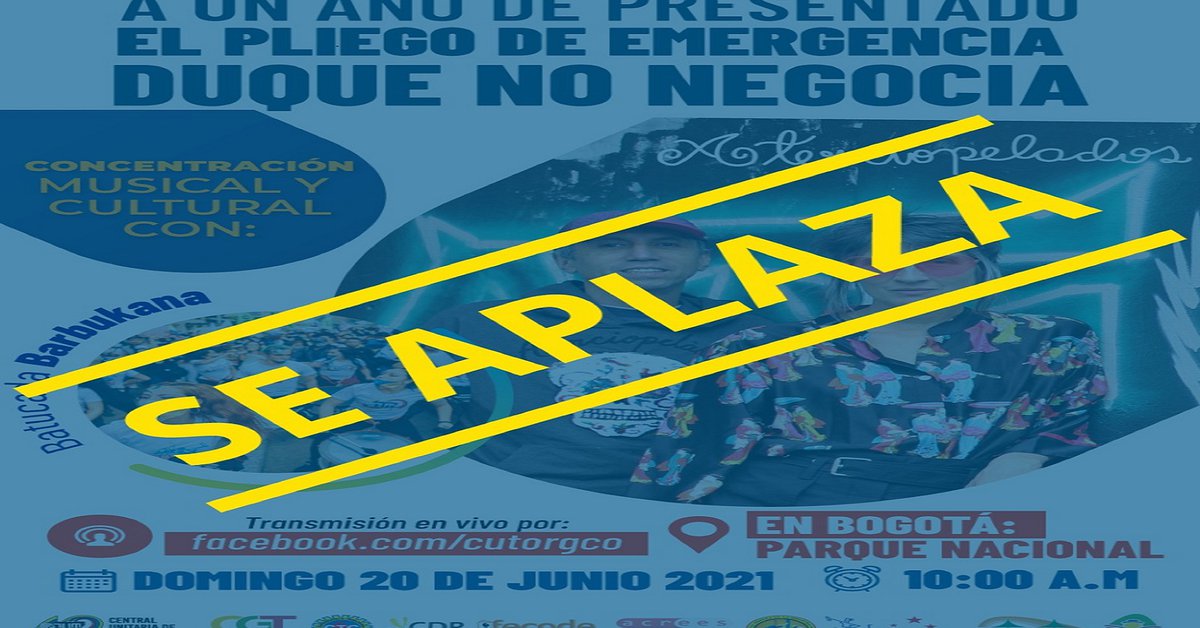 By unanimous decision, the concert with which the workers’ centrals would “celebrate” the first anniversary of the delivery of the emergency document to the Government was postponed., base of the protests that Colombia experienced during April and May 2021.

The headliners would be the emblematic Aterciopelados, who would share a stage with batucada groups and alternative cultural expressions in the National Park starting at 10:00 am on June 20.

The concert sought to remind the national government that the proposals expressed in the emergency specifications are pending negotiation: basic income for Colombians, the non-criminalization of protest, among others.

But the crisis situation caused by the extensive peak of the covid-19 ruined what was intended to be a cultural celebration that had been announced the previous Friday by the Unemployment Committee.

At the time, the prosecutor of the Central Unitaria de Trabajadores, (CUT) Fabio Arias, had stated that “we are going to carry out cultural and artistic activities in all the towns of Bogotá, and in particular in the National Park we are going to do a concert”.

The leader recognized the coincidence of dates so he was clear about the political intention of the cultural event:

The presence of Aterciopelados, according to Arias would put the rhythm to “This protest activity that the members of the Unemployment Committee will be carrying out”, accompanied by drums and other cultural manifestations.

50 days and counting: what’s next in the National Strike


Although the Committee commented that the daily mobilizations and the concentrations will not follow on Wednesdays, Due to the fact that so far no guarantees have been given for the protest and human rights violations are announced daily, in addition, as a way to help cope with the deaths from Covid-19.

“Taking into account that the CNP called for a national strike for April 28, It is decided within the framework of the same, to temporarily interrupt the periodic actions, that does not mean that the social mobilization stops in Colombia“, One of the representatives of the Committee pointed out and added” This decision It occurs with the intention of saving the lives of the protesters in two ways, one due to the lack of guarantees for the protest and the other due to the current situation in the health system.”.

In this same line, The Committee insisted that it condemns violence, insists on peaceful mobilization and demands that the damage to public and private property cease, as well as the vandalism of the public force and individuals.

Although the demonstration will be interrupted, the group acknowledged that thanks to the protest, the fall of the tax reform, the former Minister of Finance, Alberto Carrasquilla, the health reform and others took place.

Despite this announcement, large forums, meetings, talks, candles, cultural and artistic activities will be held in the largest number of municipalities. For example, On June 20, one year after the presentation of the national emergency document to President Iván Duque, a concert will be held.

Furthermore, one of the actions they execute, sIt will be the direct dialogue that the members of the group of negotiators would have, with different sectors of society, academia, businessmen, mayors and governors.

“Whatever happens, I will be proud of Millionaires”: Alberto Gamero – Infobae
Anthony Zambrano beat the Olympic champion in 400 meters – Infobae