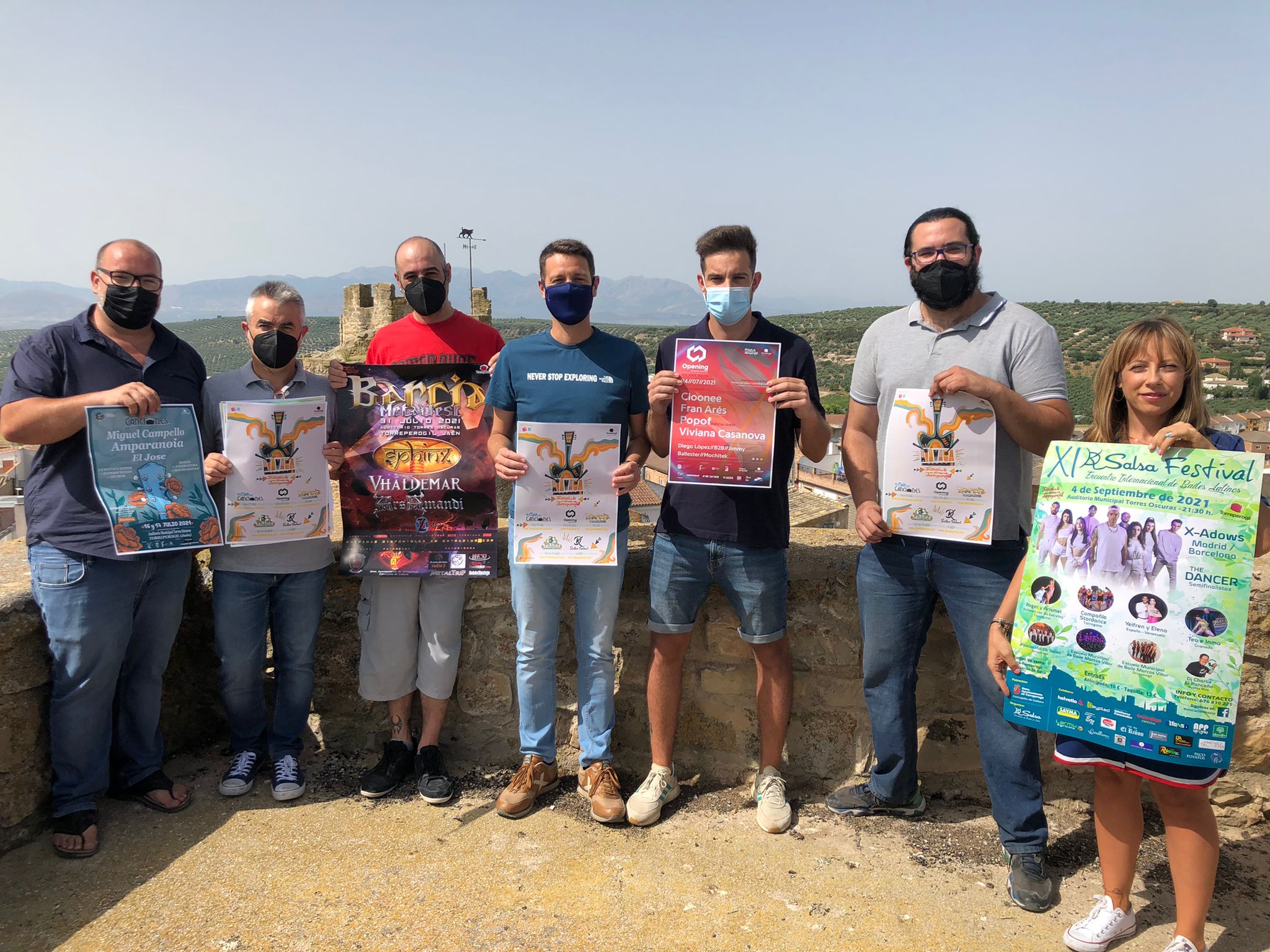 CULTURE.- The promotional action ‘Torreperogil Festivals’ includes five festivals that are held in the town of La Loma in the months of July and August with genres such as Rock & Blues, Metal, Songwriter, Electronic and Latin Dances.

The presentation was held today in an iconic place for festivals, the Torres Oscuras Auditorium which is located inside the old Pero Gil castle and which becomes the epicenter of culture in Torreperogil summer after summer.

The mayor of Torreperogil José Ruiz has highlighted the interest of these cultural events, organized by non-profit groups and that manage to attract the best of each genre and a very loyal audience to our municipality.

The City Council thus supports “all those cultural initiatives that provide added value to our town and tourism, knowing Torreperogil is knowing its people, supporting our businesses and betting on our people.”

DK SALSA FESTIVAL
This year we resumed our DKSalsa Festival with the 11th edition. There will be Latin dance shows, so as not to lose our essence, and urban dance. Artists with a long career as dancers and choreographers will be with us. Artists like Nito with his group X-Adows and Roger & Arismel, both currently have participated in THE DANCER program, remaining semifinalists.

The STARDANCE company will make us enjoy their “Latino” music, as well as other established artists and with the collaboration of dancers from the Marcos Villar Municipal School and members of the DKSalsa association.

XXII FRANK ROCK&BLUES FESTIVAL
August 13, 14 and 15 are the dates on which, despite the difficulties, the dream continues. A dream that, after 22 years, has become a reality and confirms Frank as one of the longest-running festivals and that continues to remain faithful to its original principles, having as a cornerstone the closeness between the public and the musicians, whether they are national. or come from the other side of the ocean. For this edition and considering the circumstances, we have chosen to contribute our grain of sand by betting only on national bands, so that within our modest possibilities, we can throw them a cable that is so much needed.

The first night of August 13 and following our philosophy of promoting artists from the land, the Hobo Nata festival will open with its primordial blues, the music of roots of the deep and swampy Mississippi, the one made by those homeless hustlers who were wandering from town after town looking for life. Next we will have Lomoken Hoboken, a band that oozes blues from all four sides and four are the components of this formation that seem to live at the crossroads, in the kingdom of the twelve bars and everything that comes from them. They will close the first night Mississippi Queen & the Wet Dogs, the great national revelation under the umbrella of so-called black music, which will bring us the best soul and rhythm & blues so that, hopefully, people can dance to their own compositions and adaptations. On the night of Saturday 14, we will start it with another band from the land, Alice Soul, a formation in which black music in all its aspects is the point of union of its components, highlighting in its compositions touches of blues, jazz, swing, soul …

Next, The Riff Truckers will take the stage, an authentic bomb of guitar and rock & roll riffs, without forgetting the blues, with one of the most impressive live shows that have passed through the stage of the Auditorium Torres Oscuras. To close the second night we will have one of the most prestigious bands both inside and outside of Spain such as Travellin ‘Brothers, winners of the European Blues Challenge 2015 in Brussels and being finalists that same year in the International Blues Challenge in Memphis (8 best bands of the world). Little more to say with such a curriculum. We do not renounce to have any more surprises during the weekend, as long as the authorities allow us, therefore, stay tuned, so that when next August we open the doors and light the lamps, you are all prepared to enjoy the magic that year after year surrounds the Frank.

BARCIA METAL FEST
On the 31st the fifteenth edition of the Barcia Metalfest will take place in Torreperogil, a reference festival in its style and with a very loyal audience that comes from many parts of Andalusia and outside the Community.

A 15th anniversary is always usually a special edition for any event or festival, this year will not be less, the most special and different thing about doing a festival is to continue doing it due to the situation that we all know, with certain restrictions and rules that make it so rare as different a rock or metal festival as is the case of “Barcia” as the festival of a small town in Jaén is already known.

While all the major festivals have decided to postpone their events for one more year, we want to continue betting that music does not decline in these times that we need to forget the bad moments so much, even for a day. Very few have also been the festivals in the province that continue, since last year we were the only association that did a concert with two groups and this year we did not want to have to suspend the festival again, although always respecting the situation at all times. and the one that we have to live come the day of the festival.

The biggest change of the festival without forgetting the aforementioned is that we will not have international bands this year, something that we have been doing for five years now, but that is not why the festival did not have enough quality to make the lineup continue to be attractive Proof of this has been the reaction in the advance sale of tickets that advances at a rate that we had not seen before and that also makes us see the desire to see live music again despite not doing it in conditions « normal »

The fifteenth edition will be formed by the Sphinx bands that had already been announced for last year after hearing the news of their return to the stage, Vhäldhemar who is one of the most beloved bands in recent years, Ars Amandi one of the Rock legends Nacional and Levedad Zero, the new band that this year we wanted to give the opportunity to debut with great bands on the same stage. A mixture of the best of the National scene that is not exhausted and we always take into account. Tickets can be purchased through the online sales platform entradium.

OPENNING SUMMER FESTIVAL
Opening Summer Festival returns to Torreperogil to celebrate what will be its sixth edition. As a novelty, this year the festival changes its location and adds one more day to its programming, taking place on Friday 23 and Saturday 24 July. On Saturday, the Jaén festival will once again bring together some of the most important international and national artists on the electronic scene, such as the young DJ and producer Cloonee from the United Kingdom, the Parisian artist Popof, Viviana Casanova from Chile or the Madrid artist Fran Arés with several of the most fit artists in the province.

For its part, on Friday and for the first time, the festival will have an urban stage, where we can enjoy the performances of two of the most important national artists of this genre, such as the Dj and producer Jose de las Heras and Del Puerto with Dj Buko and Oscar Herrera.

Both days will begin at 8:00 p.m. in a new venue located on the esplanade of the Torreperogil football field, with a smaller capacity than in recent years and with a distribution according to and in compliance with the legal and health measures in force in the moment of its celebration.

General tickets for the day on Saturday are sold out, those on Friday can be purchased through the website www.wegow.com and at the association’s usual points of sale.

A SEA OF SONGS
«A Sea of ​​Songs includes a diverse program for two very intense days at a tourist-cultural level, designed with activities for all types of audiences such as storytelling, exhibitions, humor, magic and literature, all around author music, which is the hallmark of this festival and of which it is a national reference, making an incision in the economic and tourist impact that the festival has on the municipality and the region of La Loma thanks to the strategic location of Torreperogil, «in the center of the province of Jaén, which makes it easier for you to complete your offer with other tourist resources already consolidated such as Úbeda and Baeza and the Natural Park of the Sierras de Cazorla Segura and Las Villas ».

The organization of Un Sea of ​​Songs has opted to carry out the festival, which last year had to be canceled due to the pandemic, although for this it has had to change the format «to a much smaller one than usual, with shows to match to the current health situation “, as reported by the director of the festival. This year this event will focus on «artists who have started from the street and have grown as musicians on the sidewalks of cities such as Granada, Madrid, Murcia or Alcalá la Real -as is the case of Amparo Sánchez- and today they are in the highest of music, “said Rosillo.

Thus, Un Mar de Songs will begin with the concert of the Granada-born singer-songwriter El Jose, in which he will play songs from his two albums, the last one published thanks to the collaboration of his fans through crowdfunding. The music will continue the weekend with Amparanoia, a musical project by Amparo Sánchez, who will present the show in which he commemorates the 20th anniversary of his first album. The musical section of the festival is completed by the singer of «El Bicho», Miguel Campello, who opens his solo career with «Chatarrero» after 10 years and 4 albums with the flamenco-rock group, in what will be his only concert in the province.

This edition is the nineteenth of this festival that such prominent singer-songwriters on the national music scene have passed through in recent years, such as Rozalén, Vanessa Martín, Ismael Serrano or Pablo Milanés, among others. The tickets for these concerts are sold out, but the organization will put on sale some last minute tickets after a restructuring of the venue.