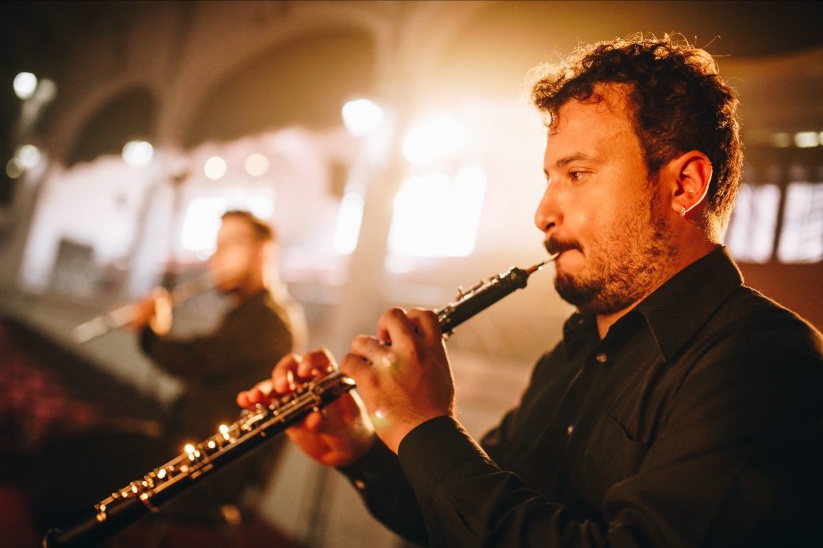 Brazilian conductor Tobias Volkmann returns to Chile to conduct the Usach Classical Orchestra in a program that includes music by his compatriot Heitor Villa-Lobos, Symphony No. 38 prague by Mozart and the Oboe Concerto by Richard Strauss.

Always with free admission, the concert will take place this Wednesday, April 13 at the Aula Magna Usach Theater (Víctor Jara 3659) and will be repeated on Tuesday 19 at 6:00 p.m. at the José Miguel Carrera Lyceum (José Francisco Vergara 292, Quilicura ) and on Wednesday 20 at 7:30 p.m. at the Municipal Theater of La Pintana (Avenida Santa Rosa 12975).

Before becoming a famous composer, Heitor Villa-Lobos (1887 – 1959) knew the streets and the night of Rio de Janeiro. He learned to improvise on the guitar, soaked up the street sound and also traveled to other regions of Brazil. Although he studied music formally, he preferred to make a living playing the cello in cafes and cinemas and made the intersection between traditions part of his identity: the Bachianas brasileiras, a series of nine compositions that combine the influence of Johann Sebastian Bach with folklore. Brazilian, are his most famous creations.

The last of the Brazilian Bachianas, composed in 1945 for string orchestra, will kick off the concerts that the Usach Classical Orchestra will offer in three districts of Santiago starting next week, under the direction of the Brazilian Tobias Volkmann: the first will be held this Wednesday, April 13, at at 7:30 p.m., at the Aula Magna Usach Theater, with free admission. Then, as part of his usual tour of communes in the Metropolitan Region, he will repeat the program at the Liceo José Miguel Carrera de Quilicura (Tuesday 19, 6:00 p.m.) and the Municipal Theater of La Pintana (Wednesday 20, 7:30 p.m. ). Registration at Extension.usach.cl.

After the Brazilian Bachianas No. 9 for string orchestra, the concerts will continue with the Concerto for oboe and small orchestra in D major, Op. 144, TrV 292, by the German Richard Strauss (1864 – 1949), with Diego Agusto as soloist; and will end with Symphony No. 38 in D major K. 504, pragueone of the emblematic compositions of Wolfgang Amadeus Mozart (1756 – 1791).

“My memories of the Usach Classical Orchestra are the best possible”, says Tobias Volkmann, who made his debut leading the group in 2017. Born in Porto Alegre and based in Rio de Janeiro, he has a versatile career, in which he has tackled symphonic repertoire, opera and ballet. He has been in front of more than 30 orchestras in Europe, the United States and South America and has been head of the Rio de Janeiro Municipal Theater Symphony Orchestra, as well as being principal guest conductor of the UFF National Symphony Orchestra. With the latter he focused above all on the contemporary repertoire and recorded three discs of Brazilian music.

“I am one of the Brazilian directors who directs more Brazilian music”, he affirms about a tour in which Villa-Lobos has been a capital figure: “I have reviewed editions of scores in recent years and I have made his works in Brazil, of course, but also in the Czech Republic, Germany, Argentina, Chile, Peru. He is my favorite Brazilian composer, without a doubt, and he is ‘the’ national composer. A genius,” he explains.

As for Symphony No. 38 in D major K. 504, pragueTobias Volkmann emphasizes that it is a piece conceived for a group of the size and “expressive language” of the Usach Classical Orchestra.

The work was premiered in 1787, during Wolfgang Amadeus Mozart’s successful first visit to that city, and part of that spirit is the one that aims to recover the interpretation that can be heard next week: “The Usach Classical Orchestra knows this repertoire and understands very quickly when one proposes a vision close to a historically informed interpretation, which considers elements such as phrasing and tuning. What we are looking for is the sound and the effect of the original idea, that the public has an impact as if it were the first time the work is heard”, he indicates.

“We will never be able to replicate the original sound of the symphony, because we are in another time and we have other instruments, but we can look for something that has been lost since the 19th century, which is the rhetoric, the discourse behind the sound, the melody and the harmonies: this surprising people who are listening, which comes from thinking of music as a speech”, he adds.

Between the music of Villa-Lobos and Mozart, the Usach Classical Orchestra will perform the Concerto for oboe and small orchestra in D major, Op. 144, TrV 292, a work that Richard Strauss composed towards the end of his life: it was in 1945, at the suggestion of American oboist John de Lancie, who was in Germany as a soldier for World War II and had played with the Pittsburgh Symphony Orchestra.

In the three concerts, his interpretation will be in charge of Diego Agusto (1991), soloist of the Usach Classical Orchestra, who has already tackled works by Ralph Vaughan Williams, Johann Sebastian Bach and Johann Joachim Quantz together with the group. Trained at the University of Chile and the Universidad Mayor, where he is currently a professor, he is also a member of the Usach Wind Quintet, with which he has just recorded the album Enrique Soro, the last of the romantics (2022).

“Doing this concert is a personal challenge that helps me to close a stage. All my studies have been to reach this goal. From a very young age I listened to it and thought that one day I would be a professional to play it”, he recounts. “Technically it is a complex work, but the greatest difficulty is its long phrases that the instrument has. They are like very large paragraphs, ideas that are exhausting because breathing is difficult.

Agusto also anticipates that “what I want to achieve is a fresh Strauss, with brilliance, not so academic. In this way, it is also better related to the symphony that follows. Mozart is agile, playful, and I want to do a version like that Strauss. Classic and with a lot of spark”.